Europe has always been a major target of Islam throughout its 1400-year history. What we see taking place today with jihadist attack in major European cities, Islamic no-go zones in many European locales, and creeping sharia, etc, demonstrates the ongoing Islamic invasion of Europe.

But this is nothing new, and two decisive battles in European history were crucial to keep the West Christian and civilised, while keeping Islam out. I just wrote about the Battle of Tours (732) which halted the Islamic advance into France and beyond: billmuehlenberg.com/2016/07/17/islam-versus-western-civilisation-lessons-history/ 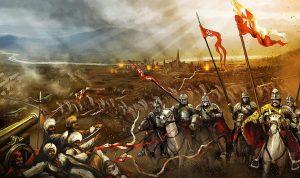 The other key battle took place a millennium later. I refer to the equally strategic Battle of Vienna which took place on September 11-12, 1683. But again, let me offer a bit of pre-history to this key battle. While the Battle of Tours had kept the west of Europe safe from invading Islamic hordes, the east was still under threat.

Indeed, the fall of Constantinople, the capital of the Byzantine (Eastern Roman) Empire took place 200 years earlier. On May 29, 1453 the Ottoman (Muslim) Turks with a vastly larger army took the city. We know the city today as Istanbul in Muslim Turkey.

Other parts of Europe were being taken over by Muslim armies, notably the Balkans (Greece, Hungary, etc). Athens, Sophia, Bucharest and Belgrade all were under the control of the Ottomans, and Vienna was now in their sites. Taking this strategic city would open the way for taking all of Austria and then Germany.

A 1529 siege of Vienna had failed, but the 1683 siege looked to succeed. The Grand Vizier, Pasha Kara Mustafa, came with a huge army of around 150,000. As they approached, King Leopold and much of the residents fled the city, leaving only around 15,000 men to defend it.

The siege began on July 16, and the Ottomans decided to simply starve the city into submission. His demands for surrender nearly succeeded. Just when they were reaching the end of their provisions, deliverance came from some other Christian armies, primarily the Poles.

The King of Poland Jan III Sobieski arrived just in time with 40,000 troops, along with German and Austrian allies. While the latter attacked on the left flank, Sobrieski and his troops took the right flank. Within a matter of hours the siege was ended and the Turks were routed, fleeing to the east.

Around 4000 men died under Sobieski’s command, while perhaps as many as 20,000 Turks lost their lives. Jan III Sobieski was received as the hero of Vienna, while Pasha Kara Mustafa was soon executed in Belgrade for his failure. This stopped the Islamic incursion into Europe and was the beginning of the end of the Ottoman Empire in terms of its expansionist goals in Europe.

Indeed, Hungary and parts of the Balkans were retaken by Sobrieski and others, so there was even further damage done to the Ottoman Empire. As with the victory at Tours, this was a crucial battle, and some might even argue a miraculous victory for the European armies over the Muslim armies.

Both battles stopped the spread of Islam into Europe, and meant that Christian civilization could continue to flourish there. The world as we know it would be radically different today if both cities had fallen to Islamic forces.

As Christians, how should we assess all this? Given that I am often challenged here, let me again state what I have at various times said about Islam, its spread, sharia law, and related matters. Christians often tell me that we should be seeking to have a Christian witness to Muslims, and not think in terms of military and political issues.

For example I just had one commentator say this very thing: we should not focus on defeating Islam but on evangelising Muslims. My answer, as always, was to say it is a false dilemma to make us choose one or the other. Instead, we should be doing both.

Of course we should seek to get to know and befriend our Muslim neighbours here in the West, pray for them, share the gospel with them, and seek to bring them into the Kingdom. That is always a priority for the believer. But that does not for a moment mean we must be unwise, even foolish, about the very real Islamic threat we face.

Islam is an expansionist faith, indeed political ideology, which has as its main aim the establishment of a universal caliphate with everyone in submission to Allah. The word Islam of course means submission. Islam is not and has never been some happy-clappy interfaith dialogue type of religion.

It is a totally exclusive religion which brooks no rivals and tolerates no competitors. Islam sees itself as the one true religion, and demands that everyone submit to it. That is why we have had 1400 years of bloody Islamic expansionism. Those of us in the free West have every right to resist this.

Democracies which value freedom of speech, freedom of religion, freedom of conscience and freedom of thought must reject sharia law and totalitarian Islam which reject all these Western values. Thus Western governments have every right to resist Islamic expansionism, terrorism and creeping sharia.

Again, individual Christians should seek to love and reach out to individual Muslims. But Western governments can and should resist Islamic jihad and the ever expanding reach of sharia law in the West. It is no contradiction or logical inconsistency to seek to do both things at once.

We need more leaders like them today. They were quite clear as to the menace of expansionist Islam. They were not foolish enough to make excuses for Islam or seek to “give peace a chance” with bloodthirsty Islamic leaders, or pretend that we can all sit around a campfire and simply sing a few rounds of Kumbaya.

There are very real enemies out there who hate us and our way of life and want to destroy us. There is nothing virtuous or Christian about allowing our sworn enemies to raze Western civilisation to the ground and wipe out Christianity.

Sure, the West is far from perfect, and Christianity can and does flourish in times of persecution. But simply putting up the white flag of surrender and allowing those who hate our faith to wipe us out is not in my books a Christian response worth pursuing. Some things are worth fighting for.

I am glad the Allies took on Hitler and the Nazis last century. I am glad whenever unjust and murderous regimes are opposed. I am glad when we can protect the innocent, stand up for freedom, and resist those who want us dead. As Thomas Sowell put it recently, “If you are not prepared to use force to defend civilization, then be prepared to accept barbarism.”

Islam is a barbaric political ideology which expands by the edge of the sword. The barbaric attacks in France of recent times are simply examples of Islam in action. Islam is still seeking to take Europe. Between the mass influx of Muslims into Europe, and the attacks of some of them when there, Islam is still at war with Europe.

Islam still wants to occupy all of Europe, and is still hurting and suffering shame and dishonour from its losses at Tours and Vienna. Islam has the big picture in mind while most Westerners can’t even see beyond today. So to my anxious Christian friends who get all shaky about talk of defending Western civilisation and resisting Islamic domination, let me repeat:

Yes, by all means, seek to evangelise your Muslim neighbours. And I suspect that most of these critics are not even doing that. But while we seek to win over Muslims to Christ here in the West, we must always remain vigilant and resist totalitarianism in whatever form it takes, be it Communist, Nazi or Islamic.

So I say three cheers for those brave warriors of the past who kept Europe free. Sure, Europe is not some untouchable holy object, and as it now increasingly abandons God, it may well meet its end, and God would be just to allow that. But freedom is a great good, and until we get some direct word from God that it is a waste of time to fight for it, I will keep seeking to defend it.