With almost daily Islamic terror attacks, Islam is certainly one of the most discussed news items of the day. An hour does not seem to go by in which Islam is not making headlines somewhere – usually for all the wrong reasons. What just took place in Nice, France is just one of the more obvious examples of this.

Thus we need to learn from history here. Anyone with even a basic understanding of Islam according to its own sources knows that this is an imperialistic political ideology. It is not so much evangelistic (as in getting souls saved), as expansionistic (as in taking over territory or geography).

Islam seeks to dominate the entire world, and it has been moving steadily in this direction throughout its 1400-year history. And its expansion has been primarily by the edge of the sword. Bloodshed, terror and murder are the basic tools of Islamic imperialism.

Thus what we have just seen in France of late is just more of the same. Three massive jihadist terror attacks in France in 18 months alone have shown us the true nature of intolerant and bloodthirsty Islam. And for those who know a bit about history, this is not the first time France has had to deal with murderous Islam. 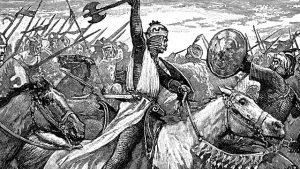 One of the most important events in all of history occurred on October 10, 732 – in France. This was a massively decisive event in Europe: it basically meant that Christianity and Western civilisation would continue. Had a different outcome occurred, many historians think that Islam would have taken over all of Europe.

So what happened on that momentous date? Let me backtrack a bit. Exactly 100 years earlier in 632 Muhammad died. For the next century an incredible period of Islamic expansion took place. The decade of 634-644 saw the conquest of Egypt, Palestine, Syria, and Persia.

By 714 Muslim armies had occupied Spain, and their forces were moving north into the rest of Europe. Thus after just 100 years of expansion, Islam ruled a huge piece of territory, from Spain to Persia. It looked like nothing would stop the spread of Islam, and Europe was in a very critical place.

Thus we must know a little bit about a key battle in history: the Battle of Tours, also known as the Battle of Poitiers (because it was actually fought between these two cities in north-western France). It was one of those dividing lines in human history.

The Frankish military leader Charles Martel (Charles the Hammer) was the hero of the day, defeating the invading Muslim forces of the Umayyad Caliphate which were twice the number of his forces, and stopping Islamic expansion into the rest of Europe.

Noted historian Edward Gibbon had said that if the Franks had lost at the Battle of Tours, “Perhaps the interpretation of the Koran would now be taught in the schools of Oxford, and her pulpits might demonstrate to a circumcised people the sanctity and truth of the revelation of Mahomet”.

However, historians today debate the significance of the battle, although most seem to still see it as being a pivotal event: vitally positive for Christianity and Europe while quite negative for the Muslims. After Tours the Muslims never again sought such north-ward expansion. Many Muslims today still see this as a tragic failure.

One helpful overview of the historians and their assessment of this battle says in part:

Many historians, including Sir Edward Creasy, believe that had he failed at Tours, Islam would probably have overrun Gaul, and perhaps the remainder of Western Europe. Gibbon made clear his belief that the Umayyad armies would have conquered from Japan to the Rhine, and even England, having the English Channel for protection, with ease, had Martel not prevailed. Creasy said “the great victory won by Charles Martel … gave a decisive check to the career of Arab conquest in Western Europe, rescued Christendom from Islam, [and] preserved the relics of ancient and the germs of modern civilization.”
Gibbon’s belief that the fate of Christianity hinged on this battle is echoed by other historians including John B. Bury, and was very popular for most of modern historiography. It fell somewhat out of style in the 20th century, when historians such as Bernard Lewis contended that Arabs had little intention of occupying northern France. More recently, however, many historians have tended once again to view the Battle of Tours as a very significant event in the history of Europe and Christianity. Equally, many, such as William E. Watson, still believe this battle was one of macrohistorical world-changing importance, if they do not go so far as Gibbon does rhetorically.
Indeed, 12 years later, when Martel had thrice rescued Gaul from Umayyad invasions, Antonio Santosuosso noted when he destroyed an Umayyad army sent to reinforce the invasion forces of the 735 campaigns, “Charles Martel again came to the rescue.”

The piece goes on to look at how modern historians view the battle and its importance. Three camps are examined, and then we read this:

However, it is vital to note, when assessing Charles Martel’s life, that even those historians who dispute the significance of this one battle as the event that saved Christianity, do not dispute that Martel himself had a huge effect on Western European history. Modern military historian Victor Davis Hanson acknowledges the debate on this battle, citing historians both for and against its macrohistorical placement:
“Recent scholars have suggested Poitiers, so poorly recorded in contemporary sources, was a mere raid and thus a construct of western myth-making or that a Muslim victory might have been preferable to continued Frankish dominance. What is clear is that Poitiers marked a general continuance of the successful defense of Europe (from the Muslims). Flush from the victory at Tours, Charles Martel went on to clear southern France from Islamic attackers for decades, unify the warring kingdoms into the foundations of the Carolingian Empire, and ensure ready and reliable troops from local estates.”

As mentioned, it still seems that the majority of historians do place a very high value on the historical and geopolitical significance of the battle. While most folks in the West may have little historical memory, and an event like this is largely lost to them, it seems many Muslims today still remember this defeat.

That in part may motivate some of the jihadists as they continue to cause mayhem in France some 1300 years later. Defeat is never viewed lightly in Islam. So the effort to take over Europe for Islam continues. This is because Islamic terrorists think in terms of centuries: the idea of getting Europe back after its big defeat of so long ago is still part of their consciousness. This is certainly true of groups like IS.

As another article puts it, “The Islamic State is obsessed with history and honor”:

France is an old country with a long history. The Islamic State has a laundry list of grievances against France going back a thousand years. ISIS also hates Europe in general for its colonial past. It blames France, in particular, for the break-up of the Ottoman Empire and the abolition of the Caliphate following the First World War. France was one of the leading countries involved in the crusades in the 11th century, and it is where the early Islamic Caliphate’s advance into Europe was halted by French ruler Charles Martel at the Battle of Tours in 732.
The Islamic State is obsessed with seeing itself as the revived Muslim Caliphate. It is therefore essential to its worldview that Europe’s old colonial powers are defeated. For similar reasons, ISIS has long threatened to conquer Rome, which would represent a symbolic victory over the long defunct Roman Empire. Without that, the Islamic State cannot claim to avenge the centuries old grievances with which it is obsessed and thus cannot fulfil its claims to restore the ‘lost honor’ of the immah.

Yes history matters. It matters greatly to Muslims, but most Westerners do not give a rip, and are overwhelmingly historically-illiterate. As a result, we are ill-prepared to take on the challenges of contemporary Islamic terror. Indeed, given such a weak response by most European leaders to the threat of Islam, it looks like it may well be Islam this time that finally prevails.

All the more reason why another leader of the calibre of Charles Martel is sorely needed today.

17 Replies to “Islam Versus Western Civilisation: Lessons From History”