There is only one thing as predictable as the regular Islamic jihadist attacks, and that is the brainless wonders in the West who defend to the death Islam and make excuses for the terrorists. It happens every time. Now with 300 casualties in Nice, France, we see this all happening again in horrific style.

I had the extreme misfortune of watching various news sites for quite a few hours yesterday, and it certainly was maddening. How many times was some ‘expert’ dragged up to tell us why Islam had nothing to do with this terrible massacre, and we need instead to deal with the ‘real’ causes.

With numerous children among the dead and injured, and a guy named Mohamed born in Tunisia responsible for the carnage, we have all the usual suspects – various eggheads, commentators, intellectualoids, talking heads, etc – coming out assuring us that once again this has nothing to do with a religion beginning with ‘I’ and ending with ‘slam’. 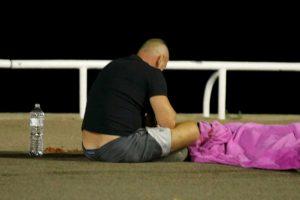 Yes poor guy – he just did not fit in. Why he did not just return to his Muslim country of origin if he hates things so much in the free West is never asked. He is simply justified and excused and exonerated for doing what he did because of not fitting in – this is the standard secular left knee-jerk reaction and part of its narrative.

Um, I have been unemployed, as have millions of other Christians, Jews, Buddhists, etc. And we have also not always fit in well to the surrounding culture. We have sometimes had poor educational opportunities, etc. But we never seem to read about such folks getting into a truck and ploughing down innocent men, women and children. Or flying planes into buildings. Or beheading others.

Not only do these lefties find plenty of reasons why someone becomes a bad egg – and it never has anything to do with an archaic, bloodthirsty political ideology – but they will immediately make a false moral equivalence. Christianity has bad eggs too, they intone like a mantra. And in that case, it WAS religion that caused it!

And then we get leaders like the French Prime Minister saying “France is going to have to live with terrorism” and various others like some of the Greens basically saying if we just showed some love to the terrorists, it will all work out. Sure, maybe if we all just hop into bed with John and Yoko and sing “Give peace a chance”, that should stop the jihadists right?

And then we have all the usual scapegoating: forget about the ideology. We need more gun control. Never mind that France already has very strict gun control, and the weapon of choice in this case was a very large 17-ton truck. But judging by the headlines of the major MSM outlets we had trucks killing people, not Islamic terrorists.

One can already imagine the preferred solutions of most Western leaders: time for some strict truck control. If we can’t ban all trucks, we can at least ask why such high-powered trucks are allowed in the hands of ordinary citizens. Time to get real on truck violence.

It is oh so predictable – and infuriating. Thankfully I am not alone in really getting tired of all this nonsense. Others are also becoming increasingly frustrated with our dhimmi leaders who sit by and do nothing – thus aiding and abetting the terrorists. Andrew Bolt was forthright here:

We in the West cannot live like this. We cannot keep living in this fear of catching a plane, standing in a crowd or even opening our mouths. We cannot keep making excuses for these attacks — in New York, Paris, Brussels, Bali, Sydney, Melbourne, Boston, London, Madrid, Orlando and dozens more of our cities. Nor can we keep letting in carriers of a faith whose most dogmatic believers wish to destroy us.
What madness is this “tolerance” of ours that we deem it rude to even discuss the warlike religion that licenses our destruction and demands an end to our most cherished liberties? And if our politicians will not speak frankly and protect us from Islam, watch out for a civil war. A frightened public will not put up with this for much longer and will defend themselves.

Forever we hear the plainly ludicrous claim that Islam is “a religion of peace”, even though it formally demands submission and was spread by the sword. Even today, Islamist terrorist groups quote passages from the Koran and sacred hadith to prove that beheading unbelievers and rape of war captives are licensed by their Prophet.
For hundreds of years this truth about Islam was known and feared by Western leaders — even churchmen. Martin Luther, the founder of Lutheranism, noted 500 years ago that the duty of Muslims was to “destroy the Christian faith”.
This is why we do not see what we regularly plead for after such atrocities as we’ve now witnessed in Nice — Muslims not merely deploring the killings but demanding the reformation of their faith and expelling the hate preachers.
Instead, we last year saw Australia’s Grand Mufti, Dr Ibrahim Abu Mohammed, issue a statement after the Paris massacre in which he listed five “causative factors”, every single one of which accused non-Muslims of doing bad things to Muslims, through their “racism” and “Islamophobia”. And so what can we do? Well, demand change. No more excuses from our politicians and leading apologists such as Waleed Aly.
No more demonising of those who at least have the courage to warn of the dangers, even of a Pauline Hanson. No more toleration of hate preachers. No more multiculturalism, and no more mass immigration from the Muslim world. Too provocative? But how can we keep living like this?

English commentator Katie Hopkins has also had a gutful of the lame and idiotic reactions in the West:

Politicians tell us to stand united. The Prime Minister of France has said he will not allow the country to be destabilised. President Hollande reminds us terrorism will not be tolerated. Well big news: France IS destabilised – in a perpetual state of Emergency. We do not stand united. We are divided, we are ripped apart. And yet we tolerate it every time. We do not stand strong. We sit like ducks. Waiting to be shot. Helpless, pathetic, slow.
We are reminded to be more tolerant. Liberal lefties takes to the airways lecturing at us, not to react. To remind us of the good and humanity in most people. Muslim mayors stand and tell us we will be there, shoulder-to-shoulder with France, reminding us Mohamed has nothing to do with ordinary Muslims or Islam. As with every other time, someone from the BBC informs us many of the victims will have been Muslim, as if that helps. Trying to give credence to the notion Islam can’t be blamed because Muslims died too. And again, we hear a familiar refrain.
The suspect was known to the police – he had a ‘fiche S’ on his file marking his links to terror and ISIS. He was a French national from Tunisia. (Why are they always French-Tunisians, never Tunisian/French? What do you think he called himself?) He was known to the police, but he was still able to get a truck and plough people down, laughing as he drove. Oblivious to (or enjoying?) the crunch of children, mums, dads, under his tyres, in his god’s name.
He was a French National because France – like Britain – is an extraordinarily tolerant nation; accepting of new, integrating migrants, opening its arms to welcome those from elsewhere. Too tolerant. And that needs to stop. Don’t spend three days in National mourning. Spend three days hunting down all those with ‘fiche S’ on their file and work out whether they really deserve a place in France. Are they an asset or a liability? Are they part of a solution or the problem? And if they are part of the problem get rid. Or at least get put under lock and key.

Predictably I am called Islamophobic. A phobia is an irrational fear of something. Like spiders. Or men in speedos. I am not Islamophobic. I have an entirely RATIONAL fear based on the fact these horrors find home in some form of that religion. I have no hate. Only a powerful intolerance of those who murder. And I look to the people of France and tell them. Do not light a candle, hold a vigil in a public square or share a hashtag. Do not stand united against terror or spend three days mourning.
Take all this emotion and bundle it into energy for action, for change. This is not sustainable. We are not bowling pins. Ready to be knocked down and replaced by the naive, the believers in multiculturalism. Imagining there is tolerance. Your hashtags and pretty pictures might make you feel better. But they solve nothing. You are self-medicating on nonsense. We need action.

But don’t hold your breath for such action. In a few more days there will be yet another Islamic terror attack. And all the same useful idiots, as Lenin called them, will come out en masse and pontificate once again on the ‘root causes’ and how Islam is not to blame, etc, etc.

Predictable. And deadly. Is it too late to wake up?

20 Replies to “Nice – The Islamists Have Already Won”