The Islamist-leaning Erdogan government in Turkey is right now in chaos, with a military coup attempt underway as I pen this piece. While the results of this coup are not yet known, I can offer a bit of background in the meantime, and provide some sense of who might be the “good guys” and “bad guys” here.

I of course make no claims to being an expert on Turkey, but I can offer some basic facts of history and religion here, and at least provide some general sense of how and why this coup is now taking place. More will have to be written as we learn about the success or failure of this attempt at deposing Erdogan.

While a long time Islamic stronghold for centuries as part of the Ottoman Empire, modern Turkey became a basically secular, democratic nation in 1923 under the leadership of General Mustafa Kemal Atatürk. He brought in many reforms and policies of liberalisation.

Turkey joined the UN in 1945, joined NATO in 1952, and an application process to join the EU began in 2005. Recep Tayyip Erdogan served as the Prime Minister of Turkey from 2003 to 2014 and became president in 2014, with just over 50 per cent of the vote. He has been more of a dictator than a democrat, certainly in the eyes of his opponents. 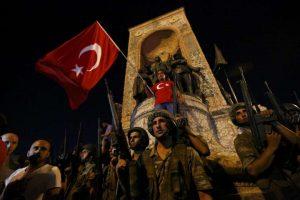 The military has long been an anchor here, preferring to keep Turkey a modern, secular nation. It – or key elements of it – wants Turkey to revert to its more secular status under Ataturk, and to turn away from the increased Islamism of Erdogan. And bear in mind that there have been a number of coups and coup attempts over the past half century in Turkey.

There may be good reason for this latest attempt: Islamic terrorism has been increasing at home and abroad under Erdogan, including funding of IS terrorists. Democratic freedoms – including the wellbeing of minorities such as Christians – have been weakened in recent years.

His jailing of journalists and opposition figures has worried many as he consolidates his power. For these and related reasons, the coup attempt is now underway. To keep Turkey from moving into a full-blown Islamist and anti-democratic regime, the military has decided to act.

Turkey is of course a very strategic nation for many reasons. It is the buffer nation between Europe and Asia. It is bordered by Bulgaria and Greece on the West, and Georgia, Armenia, Iran, Iraq and Syria on the east. As a NATO member, an ally of the West, and a secular Islamic nation, it is crucial in geopolitical relations.

So there is a real war for the soul of Turkey, both as a nation and for its international position. And as is so often the case, Western nations which are clueless about Islam, or have in fact aided and abetted it, are now calling for the status quo in Turkey. Whether it is America’s Obama or Germany’s Merkel or the NATO Secretary-General, they are all siding with Erdogan here, despite how bad he is for the West and for freedom.

As to the coup, it seems to be a rather unorganised and clumsy affair. How well thought out and planned and coordinated it was will soon enough be seen. Plenty of confusion abounds at the moment. Erdogan had been on vacation at the Black Sea and is now reported to have been flown into Istanbul.

The military now has control of some state broadcasting facilities, and some airports. There is gunfire on the streets of Istanbul and the capital Ankara. Explosions have been heard in the Parliament building. Pro-Erdogan groups are confronting the military on the streets in some places.

If Erdogan wins we all lose. If the military coup wins, we may have some breather space here. There may then be some hope for Turkey and the entire region. Time will tell. Indeed, within minutes of posting this, things may change radically.

11 Replies to “Coup Attempt in Turkey”