There are so many memorable passages in Scripture, but they can be misused and abused if not handled correctly. Jeremiah 29:11 is one such passage. It is not really a difficult passage to understand, provided it is read in context. But because it so often is ripped out of its context, it does indeed become problematic.

One of the most important rules of biblical interpretation is to study every text in its context. But various groups, such as the prosperity teachers, the name it and claim it crowd, the positive confessionists, and the health and wealth gospellers, love to run with this text while completely ignoring from whence it came.

Thus they will use this as a proof text as they claim it is God’s will for all his people to always be rich and well off, and that we should only think happy, positive thoughts, and never dwell on the negative. If this verse had no context, perhaps these folks could get away with such interpretations. 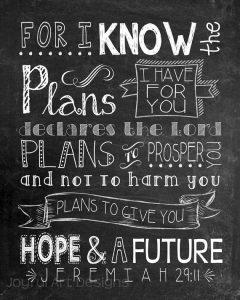 But it most certainly does have a context. The passage says this: “‘For I know the plans I have for you,’ declares the Lord, ‘plans to prosper you and not to harm you, plans to give you hope and a future’.” Taken by itself it is a nifty passage, and who wouldn’t want to claim it? But when the whole context is considered, it becomes quite another matter.

Anyone reading through Jeremiah in the chapters just before and after this one will know that the entire context is one of a disobedient and sinful Israel and the coming judgment of God. Because of sin and idolatry, God has warned the people through Jeremiah that King Nebuchadnezzar and the Babylonians will be his instruments of divine wrath and retribution.

Over and over again Jeremiah also warns against the false prophets: those who proclaim peace and prosperity when there is only judgment to come. The false prophets tell the people what they want to hear – Jeremiah tells them what they must hear, and he is hated and rejected as a result.

Earlier in this chapter Jeremiah tells the people that they will be in Babylonian captivity for quite some time, so they need to prepare for the long haul while in exile: “Build houses and settle down; plant gardens and eat what they produce. Marry and have sons and daughters; find wives for your sons and give your daughters in marriage, so that they too may have sons and daughters. Increase in number there; do not decrease” (Jer. 29:5-6).

After a lengthy period of time we are told about what will next occur in verses 10-14:

This passage, like the entire book of Jeremiah, is filled with the language of repentance. It is only when the people turn back to God and seek him afresh that the promise of verse 11 holds true. Yet how many Christian teachers today claim this verse for themselves and their followers, yet never say a word about repentance, and never say a word about the context of this verse: the just judgment of God on a rebellious and sinful people.

The positive confession teachers and the health and wealth gospellers just want to accentuate the positive and ignore the other vital – if not painful – truths of Scripture: the wrath of God, sin, divine holiness, and the need for repentance. A quick release from captivity – and divine judgment – would not be forthcoming, but turning back to Yahweh would see them eventually released.

Christopher Wright in his commentary says this about this incredible passage:

Jeremiah 29:11 probably ranks as one of the most quoted and most claimed promises of the Bible. It is found in countless text calendars, pretty pictures and sacred ornaments. It is rightly trusted as a very precious word of assurance from God. But do we take note of its context? This is a surprising word of hope to a people who stood under God’s judgment. It is not a glib happy feeling: ‘God’s going to be nice to us all, me especially’ (we should note that the ‘you’ is plural, not individual – this is primarily a promise to the people as a whole). It is rather the robust affirmation that even in and through the fires of judgment there can be hope in the grace and goodness of God. That is God’s ultimate plan and purpose. The promise stands firm, but it does not preclude or neutralise judgment. Rather it presupposes but transcends judgment.
What then should be the response to such a surprising word of amazing grace? Not gleeful celebration. Not mere relief: ‘Well that’s all right then; everything will turn out fine. Let’s have a party!’ Rather, the people are called to respond to the restoring grace of God with renewed prayer and seeking him (12-14).

All this is not to say we can get no comfort from this passage. Quite the contrary: even though it was written to a people under God’s judgment long ago, there is much believers today can take from this. As Michael L. Brown comments, “It is difficult to find a more wonderful promise anywhere in Scripture that expresses the tender compassion of Yahweh toward these exiles and setting before them, at last, a real reason for optimism and expectation.”

A major theme here is the need to trust God during difficult times. The troubles we are now going through will not last forever, just as the exile for God’s people back then would not last forever. As Philip Graham Ryken remarks:

Even though God’s people were going through the worst of times, things were still promising because God knew the plans he had for them.
If God’s plans are for the future, the Christian must not complain about the present. One of the dangers of grumbling about what God is doing is that, whatever it is, God probably is not finished doing it. By its very nature, a plan is something that will not be completed until sometime in the future. And once it is completed, it will not be a plan anymore; it will be history. If God has plans for hope and a future, you must give him enough time to work them out.
This is why the Christian always lives by faith. A Christian is someone who trusts the promises of God for the future and acts upon them in the present. In other words, the Christian acts on God’s promises before they are fulfilled. “Faith is being sure of what we hope for and certain of what we do not see” (Hebrews 11:1). To draw comfort from God’s plans for the future, one must take them by faith.
The refugees in Babylon had to live by faith. During the seventy long years of their captivity, they had to trust the promises of God. They had to live for God in the city by faith.

So the contemporary Christian can certainly draw hope from this passage and learn some valuable spiritual lessons. But it is a text which must be seen in the light of its full context, otherwise it becomes a false promise and a shallow comfort.

Repentance is ever the way to get right with God, and when we are under his just judgment, simply claiming positive words or thinking happy thoughts will not get us off the hook. It is turning back to him with all our hearts that can restore fellowship and get us back on the proper path.

As Jeremiah reminded the people in exile: “You will seek me and find me when you seek me with all your heart.” That is the language of confession and contrition, not the language of name it and claim it, or positive confession.

9 Replies to “Jeremiah 29:11 and the Health and Wealth Gospel”