Another day, another Islamic terror attack, this time in a crowded Christmas market in Berlin. So far there are twelve dead and some 50 injured. A large truck was deliberately driven into the crowds, and a suspect (thought to be the driver) has been arrested, while a passenger in the truck is dead due to injuries.

One Australian woman who was there described the terror and carnage, saying there were “blood and bodies everywhere”. She further said:

We sat just behind the stall having a gluhwein and then all of a sudden there was a big boom and the people in front of me jumped on top of me. I just saw this huge black truck speeding through the markets crushing so many people and then all the lights went out and everything was destroyed. I could hear screaming and then we all froze. Then suddenly people started to move and lift all the wreckage off people, trying to help whoever was there. 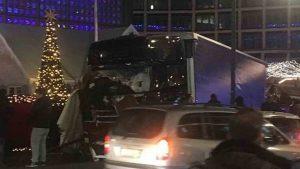 ISIS has already claimed responsibility for the Christmas slaughter. But much of the media and many world leaders refuse to mention the “M” word or “I” word here. Indeed, I just heard a dhimmi on SBS television saying this could just be an accident.

While it is still early days, it seems the attacker was a Pakistani refugee. Pamela Geller reports:

My source tells me that the jihadis who plowed into a Christmas market today in Berlin stole the truck from a Polish driver who was making a delivery to a Muslim neighborhood. The Polish truck driver told his wife he “did not feel safe” in that neighborhood. His wife has not been heard from since. Berlin police say that the Polish driver’s body was found in the cab of the truck. According to “Die Welt,” he died from gunshot wounds. Polish authorities are in contact with the German services.

US president-elect Donald Trump was not so reticent about laying the blame:

Our hearts and prayers are with the loved ones of the victims of today’s horrifying terror attack in Berlin. Innocent civilians were murdered in the streets as they prepared to celebrate the Christmas holiday. Isis and other Islamist terrorists continually slaughter Christians in their communities and places of worship as part of their global jihad. These terrorists and their regional and worldwide networks must be eradicated from the face of the earth, a mission we will carry out with all freedom-loving partners.

Even the Obama White House admitted in a statement that it “appears to have been a terrorist attack”. Australian Prime Minister Malcolm Turnbull spoke to this as well: “We are very attentive to events internationally to ensure that we learn from them and make sure that we put measures in place to anticipate similar occurrences here,”

Consider just some of the more major Islamic terror attacks that have taken place this year (and the year is not over yet – we can expect many more such Christmas attacks to occur):

As mentioned, we can expect more such attacks. The devilish political ideology known as Islam has a special hatred for all things Christian, and is actively targeting places over the Christmas holiday period. How much more Islamic bloodshed will we see in the last ten days of December?

And at the same time we have just learned about the Russian ambassador to Turkey being shot dead in the Turkish capital of Ankara by a man shouting “Allahu Akbar”. Putin will not take this lying down. Things are hotting up and Islam is on the move.