Let me say at the outset that there are two things I quite dislike. I very much dislike having to shell out my hard-earned money on really lousy books. And I also dislike the habit of some who accuse everyone who happens to disagree with them of being a heretic.

Let me unpack that. Sometimes I have to purchase a book I very strongly differ with, but I need to have it in order to write a review of it. Thus I have had to pay good money for really bad books like The God Delusion by Richard Dawkins or The Secret by Rhonda Byrne.

And I have warned in the past about how we can far too easily throw the term “heretic” around. One must be sparing and cautious in using this word. But having just finished reading the new book by The Shack author, I can say with complete conviction and certainty that William Paul Young is indeed a heretic – and I wish I did not have to pay for his lousy book. 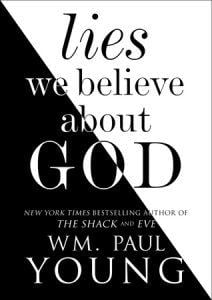 The reason Young is so much in the news right now is because the film based on his 2008 novel The Shack is now in theatres. Sadly plenty of Christians are gushing over the movie just as they did the book. When the book first came out I did a two-part review of it. At the time I really tried to be even-handed and fair with the book – perhaps too much.

I must say, if I did the review again today I would be even firmer on its dangerous points, and less generous on its possible good points. Here is that review:

But now he has his brand new book out: Lies We Believe about God (Simon & Schuster, 2017). When I first read about this book, and saw some quotes from it, I realised I had indeed been far too soft on the guy. And now that I actually have the new book in my hands, I can see just how bad he really is theologically speaking.

If you are at all conversant with theological trends and ecclesiastical fads and fashions, you will see the errant foolishness of the emerging church movement written all over this book. In brief these folks stress the fact that we are all on a journey and we cannot really have any sort of certainty, including theological certainty.

Truth is as much what we discover and create as anything, making this movement a spiritual version of postmodernism. All the emphasis is placed on relationship, with all talk of rules, laws and boundaries seen as taboo. All that matters is ‘loving relationships’ (whatever that means), and doctrine is downplayed and eschewed. Doubt is praised while firm theological convictions are seen as harmful and unwelcome.

In other words they pretty much mangle all vital biblical truth claims, and push in their place a mushy, emotive, sentimental bit of pap which sounds really neat to trendy hipsters and hip cats in the West, but has nothing to do with biblical Christianity.

Young, like all the other emergents, is very proud of all this. In his intro he tells us of how he was raised in a “Western Evangelical Protestant tradition” and that in his younger years he used to present himself “as a person of intelligence and rationality”.

But now he proudly has rejected all that, and rejoices in what can only be called irrationality, emotionalism, and subjectivity. Thus he even says, “Thankfully, I have changed a great deal.” Yeah, he sure has. There is nothing here at all that is recognisable to the Evangelical Protestant tradition, which in turn is based on the historic Christian creedal affirmations such as the Apostles’ Creed, the Nicene Creed, and so on.

As a proud and paid-up member of the emerging church faddists, he pushes the dangerous and unbiblical line that objective truth claims are now replaced by subjective opinions, and he makes it clear that one of the worst things any believer can do is claim he has any theological certainty and objectivity.

He stresses therefore that everything he now writes is just ‘maybe’ this and ‘maybe’ that, and we all should just lighten up and admit that finding objective truth about anything is really beyond us. “This book is not a presentation of certainty” he says.

Instead, he is on a ‘journey’ and wants a ‘conversation’. Everything is tentative and up in the air. Everything we used to believe as Christians is now up for grabs, and the worst thing we can do is seek to be dogmatic about anything found in the Bible.

All of which is really quite bizarre given that he has just penned a 250-page book telling us (in rather certain terms) that we have all been fed a bunch of lies, and now we must begin afresh with our own personal tastes, preferences and opinions on our spiritual journey. That is somehow liberating he thinks.

No, that is nothing but the dead end of relativism, scepticism and subjectivism. Truth is ultimately beyond all of us, so all we are left with is our own personal convictions which may or may not be right. But who cares? The main thing is that we are on a journey together and we can have a nifty conversation.

Hmm, somehow I just can’t imagine how the prophets, Jesus, the disciples, and millions of martyrs over the past few millennia have all died horrible deaths by just having ‘conversations’ and tentative feelings about everything. They seemed to be dead-set certain about what they believed, and they were willing to die for their beliefs. And millions did.

But with the emergent relativism and theological cotton candy of people like Young, there would never be any such thing as martyrs, because there never would be anyone with strong enough convictions about biblical absolutes (or anything else for that matter) to be willing to die for them.

Consider for example one atheist he talks about in rather glowing terms. It comes in his chapter in which he insists we are ALL God’s children, even atheists. He says this of the guy: “He is a good man, who loves his children, who believes in Love and Truth, who is witty and kind and generously compassionate.”

Oh good grief. This is the sort of stuff I expect to hear in The Secret (referred to above) or in any mumbo-jumbo New Age book, or in the theologically vacuous pap of folks like Osteen. Here we have an atheist who denies that God even exists and is the source of all truth, but hey: ‘He is a nice guy, so that is all that matters. He too is God’s child, and who am I to judge?’

So 2000 years of Christian evangelism was wrong? Jesus was way off base to tell his followers to make disciples of all nations? Evangelism and missions are a waste of time? Really? Yet incredibly millions of undiscerning and theologically and biblically illiterate believers are soaking up this nonsense.

It is all part of the dangerous emergent church movement, and unfortunately it has sucked in far too many gullible and uninformed Christians. For more on the emerging church movement and its host of theological, spiritual and epistemological errors, see the 38 articles found here: billmuehlenberg.com/category/the-church/the-emergent-church/

Suffice it to say that Young has basically abandoned all of the core Christian teachings and beliefs which have characterised biblical Christianity for the past 2000 years, and jumped on board the trendy, worldly bandwagon of feel-good emotivism, New Age foolishness, and theologically heretical pop teachings. And proudly so.

In Part Two of this review I will examine in more detail a number of the dangerous ideas and heretical concepts found in this really bad book.

Part Two of this article is found here: billmuehlenberg.com/2017/04/20/william-paul-young-heretic-part-two/

8 Replies to “William Paul Young is a Heretic, Part One”