There is a time for everything, as Ecclesiastes 3:1-8 informs us. And in verse 8 we read that there is “a time to love and a time to hate, a time for war and a time for peace”. No, I am not talking about just war theory versus pacifism here. I am talking about how Christians sometimes need to fight for the faith, and sometimes just let things go.

We always need to contend for the faith, refute false teaching, rebuke sinful lifestyles, and the like. That is part of being a biblical Christian. But there is also a time for staying silent, or at least waiting for better timing. And there are Christians who can be found on either extremes of this spectrum.

Some Christians are always going to war, always finding fault, always picking a fight, always criticising others, always carrying on as self-appointed heresy hunters. Such people can do real damage to the Body of Christ and the cause of Christ. 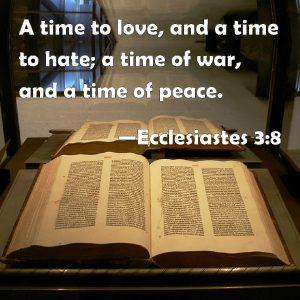 But at the other extreme are those craven Christians who never speak up for anything, who never take a stand, who never challenge sin or confront evil. They are wilted dandelions who never want to rock the boat or get anyone upset. They too can do real harm to the faith and bring disrepute to the name of our Lord.

So as usual we must try to get the biblical balance right. And even those who do try will be criticised anyway. For example, I get some folks who think I am far too pugilistic, far too belligerent, far too divisive, and far too antagonistic. Yet I also get other believers accusing me of being far too irenic, far too soft, far too restrained in calling out certain things, far too ‘ecumenical,’ etc.

You just can’t win sometimes. But here I want to look at an Old Testament passage I just read again. I came across this rather amazing passage in my daily reading today. It is just an historical account of Ancient Israel, but as is so often the case, it immediately provided me with some sermon fodder!

When Rehoboam arrived in Jerusalem, he mustered Judah and Benjamin—a hundred and eighty thousand able young men—to go to war against Israel and to regain the kingdom for Rehoboam. But this word of the Lord came to Shemaiah the man of God: “Say to Rehoboam son of Solomon king of Judah and to all Israel in Judah and Benjamin, ‘This is what the Lord says: Do not go up to fight against your fellow Israelites. Go home, every one of you, for this is my doing.’” So they obeyed the words of the Lord and turned back from marching against Jeroboam.

The bigger context can be found in 2 Chronicles 9-10. There we read about the death of King Solomon and the division of the kingdom into two halves. Jeroboam eventually ended up reigning in Israel, the northern kingdom, while Rehoboam, the son of Solomon, ruled in Judah, the southern kingdom.

Sadly he did not have the wisdom of his father. In chapter 10 we read about how Jeroboam asked Rehoboam to lessen the yoke on his people. Rehoboam consulted with his elders who told him to do so. But he ignored their wise counsel, and asked some young men he had grown up with.

They told him to make the burden even heavier. Sadly he went along with this advice. The final verse of ch. 10 says this: “So Israel has been in rebellion against the house of David to this day.” And that brings us to the opening verses of ch. 11, where the south was about to go to war with the north to retake the kingdom.

That is when a prophetic word came to Rehoboam, telling him not to fight against his brethren. So he obeyed and turned back home. This is an amazing story for various reasons, and the secondary spiritual applications are obvious. Rehoboam refused to listen to wise, godly counsel and was about to go off to war.

How often are we like this? We are ever ready to take offence, to go off on a crusade, to think the worst of others. And we can always find others who will egg us on in this regard. They seem to delight in picking a fight and starting a war.

Yet Rehoboam did listen to the man of God, and war was averted – at least for the time being. But throughout their histories they were often at each other’s throats. For example, we read this in 1 Kings 15:32, “There was war between Asa and Baasha king of Israel throughout their reigns.”

And all this was in fulfilment of an earlier prophetic word. As we read in 2 Chr. 10:15: “this turn of events was from God, to fulfill the word the Lord had spoken to Jeroboam son of Nebat through Ahijah the Shilonite.” Ahijah the prophet had told him in 1 Kings 11:29-40 that the kingdom would be divided, with ten tribes going to him in the north, and two staying with Solomon’s son in the south.

Sometimes such things are warranted and necessary. If a brother very publicly promotes rank heresy and the like, we have an obligation to stand against that. We must call out theological error, and point out sinful lifestyles. And the old principle still applies here: private sin demands private rebuke, public sin warrants public rebuke.

Having godly discernment and wisdom as to when we must go to war, spiritually speaking, and when we must remain silent – at least for a time – is an ongoing issue, and many of us are not quite there yet. We are still learning about when it is best to zip our lip, and when it is wise to speak out.

I sure don’t always get it right, and I suspect many of you do not either. We need to be a bit slower to leap into the fray, and a bit quicker to seek to hear from God as to what is the best course of action. And as mentioned, often it is a matter of proper timing.

Indeed, going back to Ecclesiastes, we are told there is “a time to tear and a time to mend, a time to be silent and a time to speak” (Ecc. 3:7). Or as we read in Proverbs 15:23: “A person finds joy in giving an apt reply—and how good is a timely word!”

And when we do wait on God’s timing we may find our words will be far more readily received. As we find in Proverbs 25:12, “Like an earring of gold or an ornament of fine gold is a wise man’s rebuke to a listening ear.” Sure, we may be led by God to share a word which will not be well-received.

And the prophets had to do this constantly. Indeed, many of the major prophets were told by Yahweh that the people would NOT listen to their words, but they were to give them anyway. It takes a lot of boldness and courage to speak out under those circumstances!

Finally, we can look briefly at the prophet Shemaiah who gave that important word to Rehoboam. We know very little about him, but he was one of God’s choice servants, mightily used for a particular time and a particular place. As Spurgeon once said about this man of God:

Some of you never heard of him before, perhaps you will never hear of him again; he appears once in this history, and then he vanishes; he comes, and he goes,—only fancy this one man constraining to peace a hundred and eighty thousand chosen men, warriors ready to fight against the house of Israel, by giving to them in very plain, unpolished words, the simple command of God.

Since Spurgeon is on a roll here – as he usually is – let me conclude with more of his helpful remarks from his sermon:

Note one more lesson conveyed by this incident. It would be a grand thing to preach only one sermon, and to be as successful as Shemaiah was; it would be far better than to preach ten thousand, and to accomplish nothing by them all. I hope the net result of our ministry will not be like that of the famous leader who with his troops marched up a hill and then marched down again. A man may take many years to say nothing, and he may very elaborately and very eloquently discharge himself of that which it was totally unnecessary for him to have said; but it would be better far to be surcharged with one message, and to deliver that one in the power of Almighty God, even if the speaker’s voice is never heard again. I pray that those of us who do preach the gospel may preach each sermon as if that one discourse were worth a lifetime, worth the putting forth of every faculty that we possess, so that, if we never preached again, we might nevertheless have done a life-work in a single sermon. What an opportunity is mine to-night! What an opportunity you also will have, my brother, when you confront your congregation next Lord’s-day, an opportunity which angels might envy you! Though you do not gather together a hundred and eighty thousand men, yet you may reach as many as that through the one sermon you are going to preach next Sabbath, for one person converted by the Holy Ghost, through you, may be the means of bringing in many others, and eventually there may come out of your one effort a harvest that cannot be counted. A forest once slept within a single acorn-cup. The beginning of the great lies in the little. Let us therefore earnestly pray God that we may preach as dying men to dying men, and deliver each discourse as if that one message was quite enough to serve for our whole life-work. We need not wish to preach another sermon provided we are enabled so to deliver that one that the purpose of God shall be accomplished by us, and the power of his Word shall be seen upon our hearers.

I realise that my title may not be perfectly phrased. Sometimes the most loving thing a believer can do is stand and fight. So I am not suggesting that it is one or the other, and that the two are diametrically opposed – but hopefully readers get my drift!