The rule of Dan Andrews and Labor in Victoria has made it the most hard-core left-wing government in the country. The militant social engineers here have pushed just about every uber-radical agenda item there is, including the gender bender madness and the toxic Safe Schools program.

These radicals are engaged in a full-blown assault on our children, and have made a declaration of war on Victorian parents. The radical sexualisation of our children is happening all over Victoria, and the leftist activists running the place have ensured that parents are not even in the loop as to the harm being done to their children. 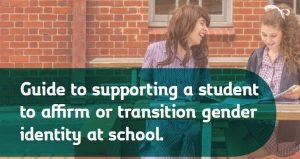 This has always been the case with the so-called Safe Schools Coalition which Andrews has always defended to the death. It is one of the most radical sexual anarchy programs around, and it has been inflicted on Victorians for several years now.

Consider just one of the nefarious resources being used in Victorian schools. The Safe Schools Coalition has put out a “Guide to supporting a student to affirm or transition gender identity at school”. The authors are all the usual suspects in this sexual militancy: Roz Ward, Joel Radcliffe, Matthew Parsons, Mel Gaylard, and Dani Wright Toussaint.

The booklet is so bad that even concerned writers overseas have been discussing this four-page document of late. Conservative writers such as Ben Shapiro and various conservative websites in the US such as the Daily Wire have been highlighting this booklet just recently.

Although American commentators are at the moment discussing how horrific this booklet is, it has actually been out for two years now. But it is still worth focusing on, because it shows how bad things are in the People’s Republik of Victoria. One of the main problems is how it actually encourages students to bypass their concerned parents altogether if they want to get involved in gender bender-ism.

Ensure a student led process.
The person who understands most about their gender transition or affirmation is the student themselves. It is crucial to the success of this process that they are included in every decision made and every action taken. Consideration should be given to the age and maturity of the student and whether it would be appropriate to involve the students’ parent(s) or guardian(s) in each decision.
Assess the support given by a student’s family members or carers, and think through the needs of any siblings, especially those attending the same school. If a student does not have family or carer support for the process, a decision to proceed should be made based on the school’s duty of care for the student’s wellbeing and their level of maturity to make decisions about their needs. It may be possible to consider a student a mature minor and able to make decisions without parental consent.

Did you get that? If a parent is not keen on having a child get dragged into this dangerous agenda, they can just be ignored, and the school will act as a surrogate parent, taking the place of parents in the decision making process. “Screw the parents” is the clear message being put out here.

Of course radicals like Ward and Radcliffe have been saying this all along: ‘forget your parents because we are now in charge’. Indeed, the Safe Schools activists boast about how they can bypass parents altogether. Consider remarks they have made at public meetings pushing the Safe Schools radicalism.

Way back in June 2014 the Safe Schools project manager Joel Radcliffe told an audience that “Parents don’t have the power to shut this down”. And Roz Ward told another audience that schools should just ignore concerns raised about the agenda: “When people do complain then school leadership can very calmly and graciously say, ‘You know what? We’re doing it anyway, tough luck!’”

This arrogant contempt of the legitimate worries of concerned citizens and parents shows how out of touch these activists are, and how far out of touch the Andrews government is. And there sure is a lot to be concerned about with the Safe Schools program in general, and this guide in particular.

For example, the guide also states that schools should allow transgender students to use the “toilets, changing rooms, showers and swimming facilities based on the student’s gender identity and the facilities they will feel most comfortable with”.

It also argues that sporting activities should not be segregated “on the basis of sex or gender identity”. And it even includes a section on how to deal with the obvious negative feedback that this program will engender (no pun intended).

And take a load of what it has to say about “School uniforms and dress codes”:

Confirm the appropriate uniform that matches the gender identity of the student and adheres to your school dress or uniform code. It could be timely for the school to consider how inclusive your current dress code or uniform policy is and whether it could be updated. For students affirming an identity that is neither male nor female, provisions could be considered by the school for the student to wear elements of the uniform they feel most comfortable with.

This guide is really full-on la la land material. Consider this bit of lunacy from the booklet:

Prepare for community responses. The school leadership team should be prepared to respond to questions or concerns from parents or members of the broader school community. This can be as simple as affirming the facts of the situation and policy that applies while maintaining the confidentiality of the student and their family. For example if someone asks why a student is wearing a girl’s uniform you can explain that the student is a girl and that you want her to feel as comfortable as possible at school. Safe Schools Coalition Australia can assist you to develop some affirmative messages to share with all staff to ensure that they are confident to respond to potential concerns across the school community in a consistent and positive way.

Good grief. Um, earth calling militants: a boy wearing a girl’s uniform is not a girl, and he does not become a girl simply by changing clothes. I do not become a bear if I put on a bearskin. Roz Ward does not become a ferret by wearing a fur coat. And Dan Andrews does not magically become a large yellow bird if he decides to wear a Big Bird costume.

But this is how utterly insane this program is. Simply ignore biology, ignore science, and ignore reality. If a boy decides he is no longer a boy but a girl, well, presto, he is one! That is all it takes. You are whatever you decide to be, no questions asked.

So if I decide I am the real Premier of Victoria can I force Andrews to step down and allow me to take over the governance of this state? If I decide I am the best Aussie Rules footballer around, can I simply demand that the Geelong Cats hire me immediately?

If I decide that I am a multi-millionaire, can I go to any bank and demand my moolah (preferably in hundred dollar bills)? If I decide that Roz Ward and his/her colleagues are certified loonies, can I demand that they all be locked away for a very long period of time?

I am not sure which is worse here. The delusional social activism that declares biology and reality to be non-existent, or the diabolical contempt that these activists have for ordinary mothers and fathers. Both stink to high heaven. No wonder this sort of story is making the rounds overseas.

Americans thought things were bad under Obama, and that they would have been just as bad under Hillary Clinton. They were quite right. But I sometimes wonder if either of these two hard-core lefties have anything on our own hyper-left social engineer, Dan Andrews.

Lord have mercy on Victoria.

19 Replies to ““Safe Schools” Militancy: The State-Sponsored War on Children and Parents”