Marriage has always been about children, for the simple reason that children are the usual result of the male-female sexual union. If human sexuality was not reproductive in nature, the state would have no interest in the institution of marriage. But it is, so the state rightly does care about marriage.

Thus children are the reason for marriage, and it is their wellbeing that we should primarily be concerned about. However the push by adults to redefine the institution of marriage shows a callous disregard for the rights of children, especially their fundamental right to have their own biological mother and father.

As such, the push for “homosexual marriage” is a grave injustice. Says David van Gend: “We are guilty of stealing a child’s birthright when we institute motherless families and fatherless homes as an ideal in our law.” No caring society can keep putting the interests of children last while we cater to adult whims and desires.

Van Gend makes his case solidly and with a wealth of social science data, debunking the numerous myths, half-truths and clichés routinely peddled by the homosexual lobby. And it is right up to date, examining the intricately related battles we now are involved in with transgenderism, the radical ideology of gender-fluidity, the “Safe Schools” program, and so on. 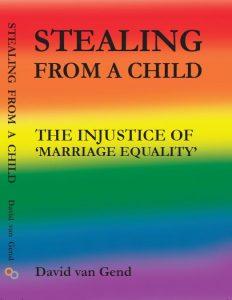 All the major battles we are currently witnessing in Australia (and elsewhere) are carefully addressed here. And every one of them ultimately centres squarely on our children. If these culture wars only impacted adults, that would be bad enough, but because children are so very adversely affected by all this, it is paramount that we rally to their defence.

This book does this head on by carefully rebutting the falsehoods and propaganda of the activists. Consider the issue of homosexual households and the impact this has on children who are raised in such homes. It is vital that the children be allowed to speak, so we have an entire chapter devoted to this very thing.

A number of very moving stories are offered of children who have now grown into adulthood who were forced to miss out on a biological mother or a biological father. One can only conclude after reading these tearful stories that to deliberately deprive children of a mum or dad is a form of child neglect, if not child abuse.

Consider just one such story from a young woman raised in this fashion: “Gay marriage doesn’t just redefine marriage, but also parenting. It promotes and normalizes a family structure that necessarily denies us something precious and foundational. It denies us something we need and long for, while at the same time tells us that we don’t need what we naturally crave. That we will be okay. But we’re not. We’re hurting.”

And the redefinition of parenting becomes utterly Orwellian as the state is forced to enter in and enforce a socially engineered genderless world. Once marriage is stripped of a key component, two genders, it also strips parenting of the same. Now any combination of adults can become “parents”: “In the genderless new world, neither spouse nor parent is defined by nature anymore; these words become a legal fiction defined by government.”

And we have plenty of cases of this already happening, where an ideologically-driven state has declared war on reality and biology. This comes in many forms, for example, deleting the words “mother” and “father” and “husband” and “wife” from government forms, such as birth certificates, marriage licenses, etc.

All this is part of the radical left’s long war against marriage, family, and morality. As van Gend documents, this has been the longstanding political goal of the Marxists, from Marx and Engels to Marcuse and Millet. The Marxist vision to abolish the family is now well under way in much of the West, with all things homosexual leading the charge.

Speaking of Marxists, van Gend also discusses the radical Marxist social engineer behind the so-called Safe Schools Coalition, Roz Ward. Said Ward: “Programs like the Safe Schools Coalition are making some difference but we’re still a long way from liberation … Marxism offers the hope and the strategy needed to create a world where human sexuality, gender and how we relate to our bodies can blossom in extraordin¬arily new and amazing ways that we can only try to imagine today.”

The gender bending agenda of the activists like Ward is closely discussed and analysed. The book examines the dangerous ideology of radical gender theory, pointing out how this too is a war on reality, as well as a war on our very DNA.

He defines it this way: “Binary is bad; male and female are social inventions not biological realities; gender is a sliding scale from mostly masculine to mostly feminine; whatever gender you feel yourself to be is what you are and nobody has the right to question your judgment.”

But all this is simply political and sexual ideology, not the stuff of hard science, as van Gend clearly demonstrates. He also documents the enormous amount of damage done to our children who have been the guinea pigs in the hands of the radical adult social experimenters.

And all this sexual and social upheaval unleashed upon us by the activists has been very costly to democracy as a whole, as various freedoms such as freedom of speech, freedom of religion, etc, are now coming under horrific and sustained attack. Indeed, van Gend himself has been subject to this more than once.

Various recent examples of this are covered in the book, including some of the more infamous cases from overseas involving Christian bakers, florists, and photographers, as well as Australian incidents such as the shocking case involving Hobart’s Archbishop Julian Porteous who was dragged off to the Anti-Discrimination Commission.

All this anti-Christian bigotry and suppression of freedom is getting worse by the day. Says van Gend: “Any law normalising homosexual marriage will be a truncheon in the fist of the thought police, enforcing approved opinion on sexuality in schools, churches and businesses via the ‘Human Rights’ Commissions.”

Make no mistake about it: this is a war: a war on marriage and family, a war on biology and reality, a war on faith and freedom, but above all, a war on our vulnerable children. No civilised society can just sit back as we feed our helpless children to the devouring jaws of the militants.

Instead we need to engage them head on with compassionate yet firm truth. And that is just what you will find in this very helpful volume. Get it, read it, use it, and take a stand for our beleaguered children.

33 Replies to “A Review of Stealing From a Child. By David van Gend.”