The passage was 2 Chronicles 19:1-2 which reads, “When Jehoshaphat king of Judah returned safely to his palace in Jerusalem, Jehu the seer, the son of Hanani, went out to meet him and said to the king, ‘Should you help the wicked and love those who hate the Lord? Because of this, the wrath of the Lord is on you’.” 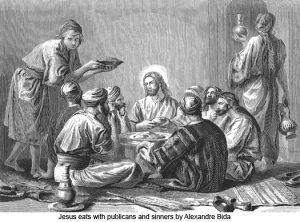 The atheist looking for trouble, or the not very well-read believer, will seize upon the words of Jesus about loving your enemies and the like and claim we have a massive contradiction going on here. But that is not at all the case. The truth is, one can love people while hating sin.

The Apostle Paul put it this way in Romans 12:9, “Hate what is evil; cling to what is good”. For much more on this general issue, see this article: billmuehlenberg.com/2016/11/23/divine-love-hate-part-one/

Let me get back to Jehoshaphat. Jehu, offering a divine word, was speaking about aiding and abetting the enemies of God, and therefore working against God and his purposes. While Jehoshaphat was for the most part a godly king, he did err greatly, as we read in 2 Chr. 18:1: “Now Jehoshaphat had great wealth and honor, and he allied himself with Ahab by marriage.”

Ahab was of course a very wicked king as we know, and Jehoshaphat should have known better. But regrettably he seems to have made a habit of forming ungodly alliances. We read later about another such occasion, along with another prophetic word of rebuke, in 2 Chr. 20:35-37:

Later, Jehoshaphat king of Judah made an alliance with Ahaziah king of Israel, whose ways were wicked. He agreed with him to construct a fleet of trading ships. After these were built at Ezion Geber, Eliezer son of Dodavahu of Mareshah prophesied against Jehoshaphat, saying, “Because you have made an alliance with Ahaziah, the Lord will destroy what you have made.” The ships were wrecked and were not able to set sail to trade.

So the words of Jehu referred to the sin of assisting and aligning with those God was opposed to. Today we can and should pray for our enemies and seek to win them to Christ, but those who set themselves against God and his ways are under his wrath, and will get what they deserve if they will not repent.

But let me take this a bit further with a related issue. You know the old saying: “If I had a dollar for every time…” Well, I certainly would be filthy rich now with all the times I heard both sinners and leftist believers making excuses for sin by saying, “Yeah but Jesus was a friend of sinners”.

The phrase comes from some sharp words of Jesus to the Pharisees and an unbelieving generation in Luke 7:34:29-35:

(All the people, even the tax collectors, when they heard Jesus’ words, acknowledged that God’s way was right, because they had been baptized by John. But the Pharisees and the experts in the law rejected God’s purpose for themselves, because they had not been baptized by John.)
Jesus went on to say, “To what, then, can I compare the people of this generation? What are they like? They are like children sitting in the marketplace and calling out to each other:
“‘We played the pipe for you,
and you did not dance;
we sang a dirge,
and you did not cry.’
For John the Baptist came neither eating bread nor drinking wine, and you say, ‘He has a demon.’ The Son of Man came eating and drinking, and you say, ‘Here is a glutton and a drunkard, a friend of tax collectors and sinners.’ But wisdom is proved right by all her children.”

So these are the words of Jesus’ opponents which he throws back at them. The idea that Jesus associated with sinners is fully understandable given that there were no other sorts of people Jesus could associate with! And he had to be with them to share the good news with them. But he never condoned sin nor made excuses for it.

He called sinners to repentance, and so should we. But I am not the only one tired of hearing lame excuses by those who throw this phrase around. Matt Walsh has just written on this, so some of his words are worth sharing as well. He too has heard this phrase misused and abused:

If I first learned about Jesus from the people who typically put forth this vision of the “hanging out” Christ, I’d come away with the impression that He was a super chill dude who meandered around Galilee constantly flanked by rowdy drunks and scantily clad hookers. I’d think that Our Lord was some sort of deadbeat who ran with an edgier crowd because He was bored and it was something to do. I’d imagine Him sitting on the curb with His posse making banal small talk and watching the day go by.
Ultimately, I’d conclude that Christ was not someone who shepherded the lost and the aimless, but who actually was lost and aimless. This is the conclusion I’m meant to draw. It’s why these people rather conspicuously choose the phrase “hung out with” instead of more accurate options like “taught” or “guided” or “ministered to.”
It’s true that Scripture tells us of Christ eating with sinners (Luke 15:1) and publicly coming to their defense, as was the case with the adulteress who faced public stoning.

Let me offer a few last words from him:

Christ dined with sinners in order to draw them closer to the truth. To the adulteress He said, “Sin no more.” To anyone who came to Him, He said, “Pick up your cross and follow me.” Christ instructed. He exhorted. He commanded. He showed the way. He did not “hang out.” There was a purpose to all of these encounters, and the purpose was always to bring the sinner out of his sin. The purpose, in other words, was to heal them.
If we say that Christ “hung out” with sinners, then we must say that a doctor “hangs out” with his patients. But we wouldn’t say that about a doctor, would we? You may enjoy making friendly conversation with your physician, but that’s not why you schedule an appointment with him. You go to him to be treated. And it’s for the same reason that we sinners go to Christ. “They that are whole need not a physician; but they that are sick. I came not to call the righteous, but sinners to repentance.” (Luke 5:31)
Something else to keep in mind: Christ dined with and interacted with those sinners who came to him. They were repentant. They sought Him because they desired holiness. Jesus was not ever seen fraternizing with unrepentant evildoers who had no interest in salvation. Really, Our Lord wasn’t even polite to those types of people. He excoriated them as “hypocrites” and “vipers.” Christ wouldn’t so much as speak a word to Herod. When He came across the money changers in the temple, He drove them out violently. He rebuked and corrected at many other points, often using the sort of language that would earn Him a stern lecture from the weak-kneed Christians of today.
Remember, also, that St. Paul tells us not to eat with someone who is “guilty of sexual immorality or greed, or is an idolater or drunkard.” Is the Apostle contradicting Jesus? Or is he contradicting our silly ideas about Jesus? I’d say the latter. St. Paul is warning us against consorting with those who are impenitent and boastful in their sin. Christ would not have shared a table with those sorts, and neither should we. And that means Christ would not have dined at a strip club, and, no, he would not have accompanied homosexuals as they were marching in a gay pride parade. He would not have walked compliantly along as people were literally announcing their “pride” in their sin. He would not have “hung out” while sin was committed and promoted in His presence. And neither should we.

Yes it is time believers started thinking straight. Yes we should associate with sinners, but not to be hip and trendy and groovy. We should associate with them because they are lost sinners going to hell. Since we have had our sins forgiven by coming to Christ in faith and repentance, our job is now to help others see this glorious good news.

That is the sort of friends of sinners we ought to be, and nothing less.

5 Replies to “Thinking Biblically About Sin and Sinners”