Throughout the West we see leftist activists ever at work. They seem relentless in their drive to destroy everything that has made the West great. They are ever agitating against all that we hold near and dear, and seem hell-bent on forever attacking the core values of faith, family and freedom.

How do we explain all this? Of course the Judeo-Christian worldview posits a malevolent spiritual being who hates everything of God and goodness, and is fomenting rebellion at every turn. That is certainly the spiritual answer to this, and one we dare not dismiss.

But let me look at some recent intellectual, political and historical background to all this. What we see happening all around us can largely be put down to a dangerous movement which we know as cultural Marxism. I have already discussed cultural Marxism in various articles, including here: billmuehlenberg.com/2014/06/28/cultural-marxism/ 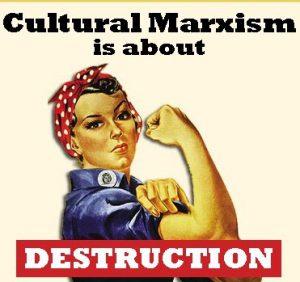 In that piece I looked at five key players: the Fabians; Antonio Gramsci; the Frankfurt School; Saul Alinsky; and Barack Obama. Here I want to spend a bit more time explaining this nefarious movement, relying primarily on two commentators. The first is author Michael Walsh.

His 2015 book, The Devil’s Pleasure Palace: The Cult of Critical Theory and the Subversion of the West (Encounter Books) is an in-depth look at the movement, examining how Critical Theory results in a war on everything – at least everything of value.

In what he calls the ‘cabal of the Unholy Left,’ the aggressors include “the Frankfurt School of (mostly German) Marxist philosophers, theoreticians, and writers, as well as their intellectual descendants and acolytes in the U.S., including the followers of Saul Alinsky, the Marxist ‘community organizer’,” who had such a huge impact on Obama.

He says that these folks are not “garden-variety liberals” but those of the hard left, “the radicals, many of whom are now in power, who would remake (‘fundamentally transform’) – wreck – the United States of America and, by extension, the civilization of the West.”

The cultural Marxists indeed seek to radically transform society into their own image. They seek to erect “a modern Devil’s Pleasure Palace, a Potemkin village built on the promises of ‘social justice’ and equality for all … a world without want or cold or fear or racism or sexism.”

But it is a coercive utopianism they are implementing. They promise us heaven on earth, but as the empirical evidence demonstrates, they have given us hell instead: “The world sought by the Frankfurt School and its Critical Theory disciples is all an illusion … The corpses of the untold millions who have died in the attempts of the literally Unholy Left to found the Kingdom of Heaven here on earth, divorced from God, surely testify.”

He reminds us that this is of course the same ambition as Satan’s: to create heaven, but a godless one. Just as Satan seeks to destroy, deconstruct and decimate everything that is worthwhile and of value, the same too with the cultural Marxists. Says Walsh:

The Frankfurt School thinkers were the cream of German philosophical society – which is to say the cream of the restive European intellectual society of the period – who had made international reputations for themselves at the University of Frankfurt and then received a warm welcome into the American Ivy League.
The work of the Frankfurt scholars —among them, Theodor Adorno, Walter Benjamin, Erich Fromm, Max Horkheimer, Herbert Marcuse, and Wilhelm Reich—was grounded in an ideology that demanded (as Marx would say), for philosophical reasons, an unremitting assault on Western values and institutions, including Christianity, the family, conventional sexual morality, nationalistic patriotism, and adherence in general to any institution or set of beliefs that blocked the path of revolution. Literally nothing was sacred.

For those without the time or patience to wade through this important 200-page volume, a seven-minute video by Joseph T. Salerno is something you may be able to digest instead. It is short and sweet analysis entitled “Cultural Marxism Explained in 7 Minutes”.

Their work came to be referred to as Critical Theory. Defining or categorising Critical Theory is exceptionally difficult, for it pertains to a broad, almost disparate set of ideas, individuals, and approaches. The underlying and enduring aspect of Critical Theory common to all its offshoots, nonetheless, is the creation of interdisciplinary theories that might serve as instruments of social transformation.
During the 1960s, the Frankfurt School critical theory gained traction with some segments of the left wing and leftist thought in both Europe and North America. Today, its influence is felt throughout Western academia, dominating the social sciences and humanities – gender studies and whiteness studies being two such examples.
One of the most influential Critical Theorists and an original member of the Frankfurt School was Herbert Marcuse. A cursory glance at any paragraph written by Marcuse will set alarm bells ringing for anyone even remotely familiar with the current culture of intolerance on college and university campuses.

The ongoing culture wars in the West has not been happening by accident. All the various isms that we find today at war with the West have had deliberate backing, agitating and fomenting by the cultural Marxists. Says Salerno:

If all of this is ringing bells, it should. We see this being played out every day in the West. This is intentional revolution, not accidental chaos. The militants are hard at work, while most of the West is asleep at the wheel. This is the war we are in.

A popular and propagandist manifestation of Cultural Marxism is political correctness, in which media channels and social scientists make it a mandatory exercise to do the following:
-Question common language. Illegal immigrants, for example, are to be referred to as “undocumented migrants”, while ethnic discrimination is referred to as “affirmative action”. Their ambition to define and redefine words can be seen as a means of controlling the discourse and altering cultural norms. Racism and sexism have been redefined as a product of prejudice plus power, which leads to such ridiculous statements as:
“There’s no such thing as sexism against men.” And: “I, an ethnic minority woman, cannot be racist or sexist towards white men.”
-Maintain an unwaveringly favourable view of groups which are marked as being ‘oppressed’. Islam is a religion of peace; Black Lives Matter is a peaceful, legitimate protest movement; Feminism is only about equality, and so forth.
No deviation from the aforementioned narrative will be entertained. Ever. Nor will criticism.
While Communism, as Marx envisioned it, offered the resolution of class conflict in a utopian social system, all that Cultural Marxism offers is a desolate form of eternal warfare between ever more narrowly defined groups of offended minorities.
The only meaningful consequence that its wide application could possibly have is the marginalisation of traditional European culture.

Yep, that is the end game: the destruction of the West and all its values. That includes Christianity, family, freedom and even human sexuality. Everything must be smashed and destroyed. And if the older Marxists could not achieve all this with bullets and tanks, the cultural Marxists are pulling it off easily in their long march through the institutions.

It is all nicely going according to plan. Marx and Gramsci and Marcuse would be so pleased. They would especially be pleased with how most folks in the West are not even aware that this revolution is taking place – or worse yet, that they don’t even care.