Open a newspaper, surf the Web, or turn on the television news, and you will be inundated with ugly examples of the frenzied Left in action: their horrific rage and hatred of anyone who differs from them is on full display. It is frightening to behold, but it does have the salutary effect of letting us clearly see just who and what we are up against.

Let me offer two very high profile examples of this from the past few days. Only those living in a cave in faraway Pakistan would not have heard of the two cases. The first of course is still an ongoing episode, and shows no signs of abating soon.

Margaret Court and her league of haters

For daring to stand up for heterosexual marriage, Margaret Court has been called every name in the book – and then some. She is of course a “bigot” and she is even a “racist”. Yes lesbian and former tennis champ Martina Navratilova actually said Court is “a racist and a homophobe”. Um, how standing up for the right of children to have their own biological mother and father makes you a racist is utterly beyond me.

And Court has even been accused of causing the death of others with her remarks! Good grief. Let’s just get this over with. Let me finish it off. For daring to stand up for what marriage has always been – something between a man and a woman – Court has of course become directly responsible for every evil under the sun.

She is clearly responsible for the Fall of Rome. She is the direct cause of the Black Plague. She was instrumental in the sinking of the Titanic. She obviously played a role in the crash of Lady Di’s car in a Paris tunnel. And I am certain that this morning’s burnt toast that I just had to chuck in the bin was brought about by her views.

Yep, she is that evil. Oh, and that time I fell off my tricycle as a toddler and scraped my elbow? Yep, you guessed it. Court is directly responsible for that as well. She sure has a lot of influence. Makes Hitler seem like a nobody. At least that is what you would have to believe if you listened to the enraged left.

Court’s family has certainly suffered as a result. “Mrs Court’s nephew Phil Shanahan, who runs a tennis academy named for her in Albury, NSW, said he had received ‘ugly’ abuse from around the world and threats of a boycott. He said he loved his aunt and she was entitled to express her views. He said his door had been ‘smashed’ in the middle of the night and said his family was ‘nervous’.”

And her 41yo daughter Marika is quite distressed at these attacks: “My mother has the biggest, kindest, most loving heart of anyone I know. This is a woman who found a man rummaging through her bin on the verge and invited him in for dinner. When we were kids, she was constantly pulling meat out of the freezer and giving it to people because she was worried they couldn’t afford to eat well.”

But sadly I have had some rather clueless Christians and conservatives trying to tell me that the proposed response of the left – to rename the Melbourne tennis court named after Court – is no big deal, and we should pick more important battles. Sadly they just do not get it.

Actually the move to rename the court is in fact a very big deal. As Miranda Devine commented just the other day: “As a reader points out, this is a modern version of ‘Damnatio memoriae’, a punishment in Ancient Rome considered worse than death. Latin for ‘condemnation of memory’ it was a form of dishonour aimed at erasing the person from history.”

It is just like the Marxist rewriting of history. So in that sense it is a very important matter – it is fascism at work. Whether shutting down a business or ensuring that someone gets fired or fined, it is all of a piece. Taking away a name like this is just as fascist as taking away a home or a livelihood – it all has to be fought or we will lose it all. 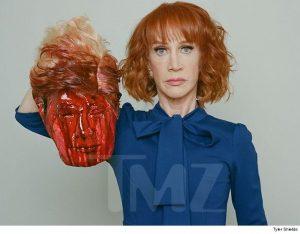 And even those on the other side fully recognise this. One famous man who thinks he is now a woman, transgender Catherine McGregor said this was way too much: “I don’t think that persecuting a 74-year-old Christian pastor is actually going to take us anywhere. Stalinist airbrushing of someone’s history … that is wrong”.

And former Victorian premier Jeff Kennett who regularly pushes leftist causes said this: “It would be an absolute travesty in the practice of democracy in this country if they bow to those sorts of pressures … it would be a travesty if expressing one’s views somehow leads to a penalty. I don’t agree with her views, but that doesn’t mean she doesn’t have a right to express them.”

Exhibit Two is of course American “comedian” and lefty Kathy Griffin. You all would know about her heroic exploits of the past few days. She actually thought it would be neat and real funny to proudly hold up a decapitated, bloodied head of President Trump.

It was sick, sick, sick. Trump’s young 11yo son was quite shaken by it, as were all ordinary citizens who are not consumed with bitter hatred like Griffin is. And she even said in a video clip before it went public that this would sure ruffle a lot of feathers. Then after a massive public reaction to this sick and twisted stunt, she issued an “apology”.

Yeah right. I am never impressed with an “apology” that only is forthcoming after half the world expresses their rightful outrage. Why did she realise she was wrong only after the fact and not before? She knew full well she would get this response. And if a conservative comic had done this, say with the head of Clinton or Obama, he could have apologised for decades and he still would be dead meat.

And get this: she is now claiming that Trump is trying to ‘ruin her life’! Um, earth calling Griffin. There is only one person who has ruined your already dodgy life, and that is yourself. Anyone with that much hatred and poison that would stoop so low to do what ISIS does and think it is actually funny is already curtains.

You have ruined your own life by allowing all this ugly hate and bitterness to consume you. But I realise you are just like so many other enraged lefties who are consumed with hatred of faith, freedom and family. It is not just that you guys violently disagree with conservatives and Christians, but you actually want to see them fully silenced.

Maybe rounded up in internment camps. Maybe sent to prison. Maybe face a firing squad. And many of you have expressed such desires. So spare me this baloney about how Trump is ruining your life. It is already ruined big time. And the left should forget all this nonsense about tolerance, acceptance and diversity.

The radical secular left is as hate-filled and intolerant as you can get. And we simply see more ugly examples of this each passing day. Thanks for making our case for us. As Todd Starnes put it:

“I will give her credit, though. That one photograph encapsulates the unbridled fury and visceral hatred of the progressive Left towards those on the Right. It’s just more evidence of the political and cultural jihad they are waging not just on President Trump – but on all of us.”

14 Replies to “Hate and Rage from the Demonised Left”