The weakest and most powerless end up being the ones who are “wrong”. Thus might makes right, and we have seen this far too often in history. One longstanding moral absolute which has been renounced to our own peril is that of the sanctity of life and the dignity of each human being. 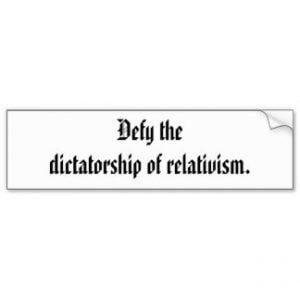 When this moral absolute is denied and trashed, then the powerful exploit and crush the weak. We have seen that with slave owners who dehumanise and depersonalise slaves. We of course saw that with the Nazis who declared Jews and others to be non-persons.

And we still see this at work today with adults who deny the unborn the right to life. In all three cases the more powerful among us have stamped into the ground those who have been considered to be less than human. All this flows from the bad idea of moral relativism.

And all dictators can tyrannise the masses this way as well, believing that they are somehow above the law while the hoi polloi must be subject to it. Only objective transcendent laws which all must be subject to – including the rulers – are sufficient to help guard against tyranny and oppression.

The Christian religion of course fully is based on the notion of transcendent universal truths and transcendent moral absolutes. We are not left to float in a sea of relativism, but we are all to be subject to objective truth and objective morality.

And that will certainly have a bearing on our political life. For example the Christian-based Magna Carta of 1215 sought to put limits on the power of the king by appealing to a higher law, the law of God. Temporal human laws must be subject to eternal divine laws.

And the Scottish Presbyterian minister Samuel Rutherford (1600–61) penned an important book on this back in 1644: Lex, Rex: The Law and the Prince. In it he argued that everyone is subject to the law – not just the ruled but the ruler as well.

The book was an attack on the absolute power of kings, arguing that the king too is subject to transcendent law. It was also a call for limited government and constitutionalism. Others could be appealed to here, but the concept of the rule of law – one which states that we are all subject to the law – clearly comes out of the Judeo-Christian worldview.

It was still seen in operation at the Nuremberg Trials in which the Nazi claim that they were just following orders did not cut it. They too were subject to a higher law than Nazi law. But increasingly in the heavily secularised West the very concept of the rule of law or a higher law is disappearing.

The process by which all this has come about is too lengthy to recount here, but a very good brief summary statement is found in the 1975 book, The Law above the Law by John Warwick Montgomery. He writes:

It has been well said that in the 18th century the Bible was killed (by unwarranted destructive criticism, as in Paine’s Age of Reason); in the 19th century God was killed (Nietzsche’s “death of God” and the substitution of the Uebermensch, the Superman, who “transvalues all value”); and in the 20th century Man has been killed (in the most destructive wars in history). This degeneration is not accidental; each step logically follows from what has preceded: the loss of the Bible leads to the loss of God, for in the Bible God is most clearly revealed; the loss of God leaves Man at the naked mercy of his fellows, where might makes right.

Relativism has done its work, and now the civilising impact of Christianity over the centuries is quickly being lost. We are quickly heading back to a new dark ages, and to a place again where might makes right. As Michael Novak put it in his 1994 Templeton Prize Address:

“Vulgar relativism is an invisible gas, odorless, deadly, that is now polluting every free society on earth. It is a gas that attacks the central nervous system of moral striving. The most perilous threat to the free society today is, therefore, neither political nor economic. It is the poisonous, corrupting culture of relativism.”

All we are now left with are feelings, emotions, safe places, trigger warnings and the cult of victimisation. Because of the curse of mental and moral relativism, critical analysis has given way to emoting. People now run their lives based solely on how they happen to feel at the time.

And an “aggressive emotivism,” as Dwight Longenecker calls it, is no match for the host of tyrants already out there, or hoping to soon come on the scene. Indeed, such emotivism becomes its own dictator, shouting down anyone accused of causing offence or displeasure. His helpful piece, penned a few years ago, is well worth quoting from:

Pope Benedict XVI coined the phrase “the dictatorship of relativism” and the rise of boo-hurrah morality illustrates the tyrannical nature of the current moral climate. Two kinds of emotion alternate in this tyranny. First is the emotion of the passive victim. When something displeases we get the firestorm of emotions: trauma, tears, tantrums, and irrational rage.
This tsunami of emotion disorients anyone who supposes there is a rational or authoritative foundation for morality, and immediately puts them on the defensive. Along with the turbulent emotions is a sense of victimhood. The opposition is put off balance. No one wants to be a meanie. No one wants to be seen to be the aggressor. The emotional blackmail works like a charm. The one who asserted or even so much as suggested an objective moral standard is put in the position of the comforter, the apologizer. He is the bumbling parent confronted with the tantrum throwing child or the befuddled bridegroom confounded and confused by the suddenly weeping wife.
Once the enemy goes to defend the wounded, weeping victim smells blood and is on the attack. The petitions are circulated. The lawyers are contacted. The lawsuits are launched. Apologies are demanded and resignations are forced. The emotivist army marches forth bristling with righteous indignation. They are no longer the wounded victims. They are the rampaging and righteous champions of the underdogs, the mistreated, and the misunderstood. They do not care about the majority vote for they are the brave pioneers who are destined to overturn the oppressive majority. They do not care for the process of law or democracy. Their cause is greater than all that. The surge in their hearts tells them so.

And this emotivism is the direct result of the loss of universal truth and moral absolutes. Moral relativism can only result in people emoting against one another. Feelings trump fact, and emotions rule:

Why has the moral debate in America descended to emotivism? Because where there is no objective truth there can be no intelligent debate. If there is no such thing as right and wrong, then it is pointless trying to have a discussion on what is right and wrong. All that remains is your opinion against my opinion and therefore the one who best uses the tools of emotional blackmail and bullying will prevail.
Nor will their prevalence stop at bullying their foes into silence. What began as emotional blackmail will continue into active use of force. They will move from emotivism to activism. The lawsuits will be followed with other forms of financial, legal, and finally physical force. In the face of emotive violence the government takes over and decides what is legal, and what is legal is not necessarily moral, for any idea of morality has long since disappeared. When the only morality that remains is that which is legal, then those who make the laws determine what can be done or not done. At that point what is legal will inevitably be that which pleases those who make the laws, and when the law is made by those who benefit from the law, the triumph of emotive totalitarianism begins.

As I said at the outset, bad ideas have bad consequences. And the bad idea of moral relativism is unleashing a torrent of bad consequences. Only a return to transcendent values can put an effective check on personal and political tyranny. Without transcendent truth and universal morality, we are all doomed to emotional blackmail and the rule of the powerful over the weak.

We have been there before and it sure was not pretty. We need to learn from the lessons of history before it is too late.

12 Replies to “Relativism and Totalitarianism”