The 228th Bastille Day has just been celebrated in France – at least by some. Not everyone is crazy about the storming of the Bastille and the terror and bloodshed that followed. The French Revolution has rightly been seen by many as a precursor to so much political violence and mob rule of the left today.

In my review of her book I said this: 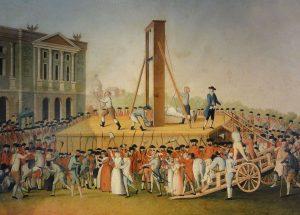 Anything associated with the old order was targeted by the mobs, but anything having to do with the church was especially focused on. Priests, nuns and lay people were massacred in large numbers, while churches were destroyed and one sacrilege after another was carried out.
Some of the gruesome descriptions of what the mobs did to ordinary men, women and children are almost too hard to stomach. Rape, torture, mutilation, and hideous forms of killing were the norm. If one had to illustrate the actions of the demonic, surely this was it. It seemed there were not enough guillotines to keep up with all the carnage and slaughter.
And all the while the crowds were cheering this on. The Jacobin program of “de-Christianization” was especially ferocious and repellent. Indeed, “the word ‘vandalisme’ had to be invented to describe” their actions as they desecrated churches, looted Christian properties, and destroyed sacred art. The revolutionaries sought to “completely destroy Christianity and replace it with a religion of the state”.
Anything associated with Christianity was open to attack. Citizens were even forced to drop their Christian names. A new Revolutionary Calendar was established, with the months renamed, and even clocks were redesigned in decimal time.

If you wondered why the radical secular left in the West today is getting increasingly irrational, violent and frenzied, all you have to do is go back and examine what began on July 14, 1789. The radicalism of that period has been repeated ever since by secular left activists.

Paul Bois has just penned a piece on this and is worth quoting from at length:

People typically think of the “Reign of Terror” ushered in by Robespierre and his Jacobin club as an era of grotesque political executions where kangaroo courts would sentence crown loyalists and traitors to death by way of the iconic guillotine as the crowds of Paris celebrated. It was all of this, yes, but it was all of this and much more.
In September 1792, an event known as the September Massacres claimed the lives of 1200 to 1400 people in less than four days when revolutionary mobs stormed the Paris jails and murdered men, women, and children by hacking them to pieces or bashing their skulls in. Of those killed, 233 were Catholic priests that refused the oath demanded of them in the “Civil Constitution of the Clergy,” which placed the Church under state control.
Spurned on by rebellions in the countryside, the revolutionaries by 1793 would jettison the principles laid out in the “Declaration of the Rights of Man” with the institution of a secret police that would monitor citizen activity and arrest anyone they deemed unfriendly to the revolution. Informants were stationed everywhere, and people could be carted off to the guillotine for so much as addressing people in the old-fashioned “Monsieur” and “Madame” instead of the state sanctioned “citoyen” (citizen). Even back in 1793, leftists were butchering common terms.
Robespierre and the Jacobins regarded the Catholic Church and Christianity in general as little more than a cloying reminder of France’s monarchical and superstitious past. To fully sever from it, they launched an era of dechristianization that included the state’s confiscation of Church property, the destruction of Christian icons, and instituting of bizarre civic cults, including the Cult of Reason and the Cult of the Supreme Being. All priests and clergymen that did not swear the oath mandated in the “Civil Constitution” were liable to execution on site.
None felt this dechristianization quite so harshly as the peasants in the coastal region of the Vendée, who became subject to what some historians have classified as the first modern genocide, with the current death toll 170,000.

Back in 2008 John Zmirak wrote about Bastille Day, noting that it was in fact a “baptism of blood”. A revised version of his piece appeared two years ago and he also looked at Vendée:

But the first such modern genocide in the West took place in France, beginning in 1793. It was undertaken by modern, progressive apostles of Enlightenment and aimed at pious peasants in the Vendée region of France. By its end up to 300,000 civilians had been killed by the armies of the Republic.
This story is little discussed in France. Indeed, a devout historian who teaches at a French university once told me, “We are not to mention the Vendée. Anyone who brings up what was done there has no prospect of an academic career. So we keep silent.”

It was ordinary farmers of the Vendée and Brittany regions who rose up in 1793 against the middle-class radicals in Paris who controlled the country. The ideologues of the Revolution had already
-Executed the king and queen, and left their young son to die of disease in prison.
Seized the Cathedral of Notre Dame, stripped it of Christian symbols, and enshrined a prostitute as the “Goddess of Reason” on the altar;
-Declared a revolutionary “war of liberation” against most of the other countries in Europe;
-Suspended all Protestant services, in deference to the state’s cult of Reason;
-Seized all church property from Catholics, expelling thousands of monks, priests and nuns to fend for themselves, then sold the property to their cronies to raise money for their wars;
-Ordered all clergy to swear allegiance to the government instead of the church; and
-Launched the first universal conscription in history, drafting ordinary people — most of them devout peasants bewildered by the slogans that held sway in Paris—to fight for the Revolution.
When the Parisians came to take away their sons for the army, the Vendeans finally fought back and launched a counter-revolution in the name of “God and King.” It quickly spread across the northwest of France, tying down the government’s professional armies — fighting untrained bands of devout guerillas, many of them armed only with muskets suited to hunting.

He quotes writer Sophie Masson on this:

The atrocities multiplied, the exterminations systematic and initiated from the very top, and carried out with glee at the bottom. At least 300,000 people were massacred during that time, and those of the intruders who refused to do the job were either shot or discredited utterly. But still the people resisted. Still there were those who hid in the forests and ambushed, who fought as bravely as lions but were butchered like pigs when they were caught. No quarter was given; all the leaders were shot, beheaded, or hanged. Many were not even allowed to rest in peace; the body of the last leader was cut up and distributed to scientists; his head was pickled in a jar, the brain examined to see where the seed of rebellion lay in the mind of a savage. . . .

When we think of more recent massacres, bloodbaths and genocides committed by other secular left regimes such as godless communism, we can’t help but see a straight line from what happened over two centuries ago. It is the same lust for power, the same commitment to violence, and the same hatred of ordinary men (all in the name of mankind) being played out all over again.

Bastille Day is not something to celebrate. The French Revolution, like the Russian Revolution and other ideological upheavals, was a bloody disaster resulting in the death of countless individuals. Whether under Robespierre or Lenin or Stalin or Mao or Castro, these atheist revolutionaries sought to bring their own version of heaven to earth.

But hell on earth was instead the actual result. As G.K. Chesterton put it in Orthodoxy: “The secularists have not wrecked divine things; but the secularists have wrecked secular things, if that is any comfort to them. The Titans did not scale heaven; but they laid waste the world.”

22 Replies to “The French Revolution, Genocide, and the Secular Left”