Believe it or not, some people will be upset with my title. You see, some “Christian” teachings out there would question whether this woman is even a Christian. They might even claim she is a fake, a fraud, a phony. At best, they will tell you that she obviously does not have faith, and/or she must have sin in her life that she refuses to repent of.

That in a nutshell is how the heretical Health and Wealth gospel looks at the issue of suffering. Except for persecution, these folks will insist that a Christian should never suffer. They certainly should not experience any sickness or illness, and they should not be poor as well.

They insist that Christians are King’s Kids and they should live like it. That means rolling in the dough and never having to suffer from ill health and sickness. If a Christian does experience these things, it is because of a lack of faith or unconfessed sin. This is a damnable theology, one I have refuted many times. See the 64 other articles here for more on this: billmuehlenberg.com/category/theology/the-health-and-wealth-gospel/ 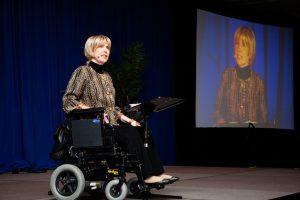 Thus the H&W gospel just does not know how to deal with someone like Joni Eareckson Tada. Because it is such a deplorable and unbiblical “gospel” it can only condemn someone like her. It has no place for this sort of suffering, and it teaches that God is only glorified when we are delivered from illness, not while in it.

But enough of the despicable H&W gospel, and more about Eareckson Tada. Many of you would know her story. Fifty years ago as a 17-year-old American teenager she dived into a shallow body of water. She was paralysed from the shoulders down, and has been a wheelchair-bound quadriplegic for half a century now.

Yet she has one of the most radiant and glorious Christian testimonies you will ever come across. God is glorified big time in her life and in her sufferings. The way she has dealt with her disability has demonstrated great faith – massive faith – more than most of us will ever know. And God has been greatly glorified by her moving and powerful testimony.

Millions of Christians have been strengthened in their faith by knowing about her and her story. She has spoken all around the world and has written often on her story. She has penned nearly 50 books, including her best-selling 1976 autobiography, Joni. Other terrific volumes include: A Step Further (1978); When God Weeps (1997); and Finding God in Hidden Places (2010).

She has just given an interview with Christianity Today, marking her 50 years of disability, and this is well worth quoting from.

How do you feel as you reflect back over the past 50 years?
Just the other day I was reading 1 Peter 5:10 [ESV], where Peter says, “After you have suffered a little while, the God of all grace … will himself restore, confirm, strengthen and establish you.” Honestly, I’m amazed that the last 50 years feel like only “a little while.” Maybe God does that when we finally do love Jesus more, when we finally do follow him more closely. Maybe he erases all the horror, all the despair, all the depression of the past when we learn how to trust God. He pushes into the background all the terrible times of anguish, and he brings forward the highlights—the moments of hope, peace, and growth. As I look back over 50 years, I just see God at work. That’s pretty exciting.
Throughout your journey with quadriplegia, you’ve interacted with people who link suffering to sin or who’ve taught that having “enough faith” leads to miraculous healing. What appeal did this sort of “faith healing” initially have for you as a young woman?
When I was first injured, I just wanted out of my wheelchair. I wanted to walk again, I wanted to have hands that worked. So I followed every scriptural injunction: I was anointed with oil, I went to the elders, I confessed sin. I would call my friends up on the telephone and insist, “Hey, the next time you’re going to see me, I’m going to be on my feet. Have faith with me, believe with me.”
I remember going to [faith healer] Kathryn Kuhlman’s services. The one that sticks in my mind was the first one I went to. The place was packed. There were several thousand people and I was sitting in the wheelchair section. I was watching Kuhlman preach, testimonies were shared, and music was offered up from the platform. Then the spotlight centered on the corner of the ballroom where healings were happening and my heart started pumping. The spotlight switched to another corner, and I was getting more excited, thinking that maybe the spotlight will come and hit the wheelchair section. But it never did.
In fact, the ushers came early to escort those of us in wheelchairs out of the event so as not to create a traffic jam. I remember sitting there in the line of people waiting at the elevator and all of us were quiet. I looked up and down that line and I thought, Something’s wrong with this picture. Why is it that the people who needed healing most obviously were the ones that the spotlight missed? I realized I was getting it wrong—the Bible must have something else to say about this.
How has your view of healing changed?
One of the first things I read about healing that really helped was from Mark 1. Jesus has been healing all day long. Finally, everybody goes away and night falls. The crowds come back early the next morning and Simon Peter goes looking for Jesus because he’s not to be found—he’s somewhere praying. When they find him, Simon says, “Everyone is looking for you!” Jesus’ reply to Peter is so amazing. He doesn’t say, “Oh, quick, let me go back down the hill and help all these sick people.” Instead he says to Peter, “Let us go somewhere else—to the nearby villages—where I must preach there also. For this is why I have come.”
I read those words, “This is why I have come,” and I began to see Jesus’ priorities of healing differently. The same man who healed withered hands and blind eyes is also the one who said, “If that hand causes you to sin, cut it off, or if that eye leads you astray, gouge it out.” God is interested in a deeper healing.
There really are more important things in life than walking. There are more important things in life than having the use of your hands. And that is having a heart that’s free of the grip of sin and pride and self-centeredness. I’m not saying I’ve arrived—I’ve got a long way to go—but I’m on my way, and that’s a very good feeling.
Do you counsel those who are suffering due to disease or disability to pray for physical healing?
Yes, I think it’s so important to. In fact, the Book of James tells us to. We should follow every one of those scriptural injunctions I mentioned a moment ago. God may well miraculously heal, and if he does, it’s not only to the benefit of that person but it’s to God’s glory. It’s a sneak preview of the day when the eyes of everyone who is blind will be opened, and the ears of all those who are deaf will be unstopped, and the tongues of all those who can’t speak will shout for joy, and all lame people will leap like deer. However, I think those kind of miraculous healings are often the exception rather than the rule.

Of real interest is the fact that she also spoke about little Charlie Gard who died today in the UK, just before his first birthday. And she has long spoken out against legalised euthanasia. The interview says this about his tragic case:

Of the Charlie Gard case in England, you’ve said the hospital’s initial decision to remove life support against his parents’ wishes “only reinforces the ‘better off dead than disabled’ mentality that, as of late, is being fueled by cost considerations in hospitals.” Where do you see this mentality, and why is it so dangerous?
It’s dangerous because of the very low life value we put on people with severe chronic conditions—people who use up a great many healthcare resources. In an economy where healthcare dollars are very scarce, the triaging of healthcare resources will be skewed in favor of the strong and not the weak. I see this even now in some of my friends who are quadriplegic and ventilator-dependent. They’re having a harder time getting the kind of healthcare that they need.
Our economy is so focused on cost-effectiveness and return on investment. We live in an entitlement culture where cost-benefit analysis is preeminent. And who suffers in such a society? It’s the elderly. It’s newborns with multiple disabilities. It’s those in comas. It’s people with chronic medical conditions. That’s why I think that this whole issue is so critical right now for the church.

The interview goes on to talk about her views on legalised euthanasia and assisted suicide. Because this is such a hot topic at the moment, and because she has written and said so much on this matter, I will devote a whole new article to that issue. Let me finish with the closing question asked of her:

One aspect of your ministry, Joni and Friends, is equipping churches to develop disability ministries. What gifts do those with disabilities bring to the church?
If our churches are looking for God’s power to show up in our congregations, 2 Corinthians 12 tells us that God’s power shows up best in weakness. People with disabilities bring to the church a great audiovisual aid of how to deal with hardship. They show the church how God’s power can be released through weakness, and we all need examples of that. We need to see people who are smiling and persevering and enduring through their hardships.

11 Replies to “Joni: 50 Years Glorifying God in a Wheelchair”