Yesterday I wrote about a very worrying news report that spoke of an “unofficial” policy in Queensland which would keep four-year-old children from sharing religious-themed Christmas cards or sharing the gospel while at school. This was the recommendation of a government review process, and it sure caused an uproar. See my piece here: billmuehlenberg.com/2017/07/27/ongoing-war-christianity-australia/

Even before the ink was dry on that piece (OK, we have no ink to dry in computer-generated articles) there was panic in the Queensland Labor government. The Education Department obviously faced an overwhelming public backlash, so they quickly went into damage control, issuing a statement saying no changes had taken place. 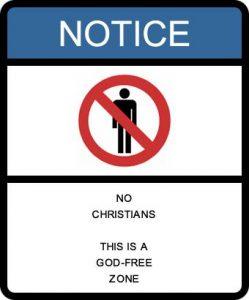 It was as if nothing had happened and all concerned citizens could just go back to sleep. But the statement was just more government doublespeak, which said nothing about why such reviews are held, and why these recommendations were made by education bureaucrats. It said in part:

This hastily released statement is really about two things: damage control, and sleight-of-hand government-speak. There was a huge public backlash about this, with petitions circulating, letters being written, and MPs being contacted. So the Labor government had to move quickly.

Also, this statement is important as much for what it did NOT say as what it did. Why did it say nothing about the various government reviews which were behind the original story in the first place? Why did they pretend that these reviews and the recommendations contained therein did not even exist?

Thankfully a few media outlets, sensible politicians, and some pro-faith groups, are continuing to make a stink as they seek to get to the bottom of all this. For example, a piece in today’s Australian is well worth quoting from:

Queensland education officials bypassed the government’s own religious instruction experts when devising an unofficial policy that prevented primary school children from talking about Jesus in the playground and could stop them from giving Christmas cards depicting the birth of Christ.
The Australian has learned that the Queensland government’s Religious Instruction Quality Assurance taskforce, which is responsible for advising the department on religious education, was not made aware of the contents of the department’s latest review of religious instruction materials before its publication in March.
The review found that children who took religious instruction might talk about Jesus in the playground, “evangelising” students who did not take the classes, and cause an “unsafe” environment. Principals were expected to take action to stop this happening.
Facing a backlash over the revelations, Education Minister Kate Jones confirmed yesterday that the review was presented to the taskforce at its meeting in May, after which concerned members sought a follow-up meeting to clarify details of the policy.
Ms Jones’s denials that there had been a change in government policy on religious instruction failed to assure religious groups or the Liberal National Party, with state Opposition Leader Tim Nicholls calling the review “political correctness on steroids”.
Federal Education and Training Minister Simon Birmingham said “hardworking teachers … have more important things to do than being the playground thought police”.

The article features the words of various concerned Queenslanders:

Lawyer Mark Fowler, who specialises in religious and charity law, said the review itself “expressly acknowledged there was no grounding under statute or under regulations”, yet the department had taken a position on student evangelism regardless.
Maroochydore MP Fiona Simpson raised her concerns with Ms Jones in May, after she was contacted by a constituent whose child had been disciplined at school for repeating content taught in a religious instruction class in the playground. She accused Ms Jones of “fudging the issue”.
“Clearly there has been a change in policy — it’s in black and white in these documents,” Ms Simpson said. “It’s a dangerous policy; it makes children more vulnerable, not less.”
Christian parents Scott and Deb Pasley, who live in Premier Annastacia Palaszczuk’s electorate of Inala, are concerned that children could be prevented from talking freely about their faith.
“I don’t think kids think about it in terms of converting people; kids just speak about who they are and what they know,” Mr Pasley said. “To say a child can’t talk about Christmas, or Eid … we’re effectively denying them from expressing who they are as a person.’’

And Wendy Francis, the Australian Christian Lobby Queensland Director said the Education Minister Kate Jones has simply compounded the confusion and she needs to bring some much-needed clarity on these matters:

“It seems that bureaucrats have over-reached and I am glad the minister has recognised this. But parents, children and principals need clarity over the status of department reviews which take a hostile approach to Christianity.
“It is hard to understand what these unelected bureaucrats fear from children talking about Jesus, exchanging Christmas cards with nativity scenes and with Christmas decorations featuring angels.
“Whether people are Christian or not, most Australians would be surprised that governments are cracking down on Christianity in this heavy-handed way.
“It is telling that Islam and other religions have not been singled out by the bureaucrats,” Ms Francis said.

It is good to see so many folks so concerned about this Christophobia which is so clearly on display within the ranks of the Queensland Labor government. And it is great to see so many ordinary people also speaking out. They have had a gutful and are saying, ‘Enough is enough – leave our children alone and leave our faith alone’.

Well done to all those who have spoken out in the past 24 hours. Keep it up. You are making a real difference. People power certainly works!

9 Replies to “Confronting Christophobia in Queensland”