The announcement by US President Donald Trump that transsexuals will not be able to serve in the US military has had all the expected hysterical reactions from the lunar left. Democrats, leftists and activists are denouncing Trump and predicting the end of the world as we know it for daring to make this decision. 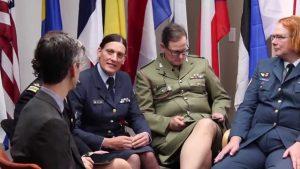 It was Obama who first allowed this to take place back in 2016, and now it will be reversed. Here is what Trump said about the change:

After consultation with my Generals and military experts, please be advised that the United States Government will not accept or allow Transgender individuals to serve in any capacity in the U.S. Military. Our military must be focused on decisive and overwhelming victory and cannot be burdened with the tremendous medical costs and disruption that transgender in the military would entail. Thank you.

Screams of discrimination and rights being violated were of course heard again, and the left is up in arms about all this. But not everyone went on a bender about this policy shift. More sensible voices have applauded the President for this, and have offered a sound rationale as to why this was the right move.

For example, Ryan Anderson has just penned an article on this, offering us five solid reasons “Why Transgender Accommodations Aren’t Compatible With Military Realities”. Given that his new book will be all about the transgender agenda, this is helpful information indeed:

Here are just a few of the considerations:
1. That the privacy of service members must not be infringed.
This means that no soldiers, including those who identify as transgender, should be allowed to use the sex-specific facility of the opposite sex. When it comes to barracks, bathroom, showers, etc., the privacy of all service members must be respected.
Given the nature of military living quarters, it is unclear where soldiers who identify as transgender could be housed.
2. That all service members remain combat-ready at all times.
But soldiers who have “transitioned” medically require regular hormone treatments and follow-up visits after sex-reassignment surgery. It is unclear how someone who has “transitioned” would be deployable.
3. That all service members be held to the same physical fitness standards, and that these standards be based on the reality of biological sex, not the subjective “gender identity.”
Men who identify as women should not be held to a lower standard than other men—they should be held to the standard for someone with their body that the military has determined is most effective for combat.
4. That scarce taxpayer monies not be expended on costly and controversial sex-reassignment therapies.
This is particularly the case as growing foreign threats are stretching our military’s resources, and as we struggle as a nation to provide basic health care to all. But it is unclear how soldiers who identify as transgender would pay for their treatments apart from including coverage in Tricare, the military health care program.
5. That the medical judgment, conscience rights, and religious liberty of military doctors, chaplains, commanding officers, and fellow service members be respected.
Unless and until military leaders are able to find a way to respect all of these provisions, there will remain good reasons why the military will be unable to accommodate people who identify as transgender.

And one former transsexual, Walt Heyer has also weighed in on this. He too sees very positive reasons for moving in this direction. His piece is so very helpful that I must run with the whole thing:

I think he made the right decision—and as someone who lived as trans-female for several years, I should know. When I discovered Congress voted earlier this month to not block funding for transgender-related hormone therapies and sex change surgeries, I wondered if it considered how devastating this will be to the fitness, readiness, and morale of our combat-ready troops.
In July, the House of Representatives voted down Missouri Republican Rep. Vicky Hartzler’s amendment to the National Defense Authorization Act, which would have banned the military from funding such treatments. Paying for transition-related surgeries for military service members and their families is beyond comprehensible.
Perhaps they have forgotten that our military was forged to be the world’s strongest fighting force, not a government-funded, politically correct, medical sex change clinic for people with gender dysphoria. Gender dysphoria, the common diagnosis for one who feels at odds with his or her birth gender, develops from prolonged anxiety and depression. People are not born that way.
The “proof” for a diagnosis of gender dysphoria is having strongly held feelings—but feelings can and often do change over time. The military is expected to prepare its members in warfare: to kill, destroy, and break our enemies. The most important factors in preparing a strong military are not hormone therapy, surgical sex changes, or politically correct education.
We need psychologically fit, emotionally sound, highly trained troops to protect our nation from its enemies. While countless homeless vets are currently sleeping under cardboard boxes, or waiting for life-saving care from the Department of Veterans Affairs, we learn that transgender military recruits now qualify for preferential coverage for sex change procedures that are scientifically unproven and extremely costly.
I myself was fully sex-reassigned from male to female, and eventually came to accept my birth gender.
I have over 70 years of firsthand life experience, eight years of living as a woman, 20 years of researching the topic, and 12 years of helping others who, like me, found that transitioning and reassignment surgery failed to be proper treatment and want to restore their lives to their birth gender.
Costly, but Not Effective
Transitioning can be expensive—up to $130,000 per person for numerous body-mutilating and cosmetic procedures over many months (or years) to fashion the body to appear as the opposite sex. Yet, no matter how skilled the surgeon, or how much money is spent, it is biologically impossible to change a man into a woman or a woman into a man. The change is only cosmetic.
The medical community continues to recommend this radical “treatment” in the absence of scientific evidence that people are better off in the long run. This population attempts suicide at a rate of 40 percent. Even after the full surgical change, they attempt to end their lives, or tragically succeed.
Over 60 percent of this diverse population suffer from co-existing mental disorders. Consider Bradley Manning (now Chelsea Manning), a former Army soldier who was so psychologically and emotionally unbalanced that he stole confidential documents from the military and forwarded them to WikiLeaks.
The Military Is a Fighting Force, Not a Gender Clinic
The military should not provide sex change surgery.
Through my website, sexchangeregret.com, I hear from people who experienced firsthand how damaging and unnecessary reassignment surgeries were. For them, the sex change failed to resolve the emotional and psychological disorders that drove the desire to change gender.
Many write after living the transgender life for years. They write to ask for advice on how to reverse the original surgical change and restore their lives to the original birth gender like I did, a process called detransition.
Some service members will come to regret having undergone the surgery and will want to detransition. Where will the military be then? Will the military pay for the sex change reversal procedure, too?
Failed “sex change surgeries” are not uncommon and will drive up the cost to care for the military transgender population above the projected $3-4 billion 10-year cost.
Beyond the financial cost, there’s the question of the service member’s military readiness during their transition or detransition, as the process often comes with a great deal of anxiety and emotional instability.
I know of many who have struggled to adapt to the new gender role for years after reassignment surgery.
In my view, as a former trans-female who works every day with regretters, allowing the military to pay for sex change surgeries will make a mockery of the U.S. military.
Advocates are relentless in their pursuit of making others, via the government and insurance companies, cover the cost of sex change procedures.
If the military had been forced to pay, the advocates would have used this as leverage to press every other entity—both government and commercial—to pay for sex change surgeries as well.
As a person who lived the transgender life for eight years, I can attest that assisting, affirming, or paying for hormone therapies and genital mutilation surgeries would not have strengthened our military. They would only have brought adverse long-term consequences, both for individuals and for our armed forces as a whole.

Some years ago I wrote a piece on why it is not wise to allow women to serve in combat positions in the military. I got a lot of flak for that, especially from feminists and leftists. I will expect the same here. But in both cases, the protection of America trumps the demands of radical sexual ideologues and PC militancy.

As Family Research Council president Tony Perkins put it: “It’s not about the individual – it’s about the military. President Obama used the military for the advancement of his radical social agenda. This president is saying no. The military is there for one purpose only – to keep America secure.”

8 Replies to “Keeping the Military Fit For Service”