The list of useless, vacuous and just plain false mantras being tossed around in the homosexual marriage debate is very lengthy indeed. Every idiotic claim that can be made has been made. Of course one would expect those on the secular left to continually offer up such senseless remarks.

Sadly however there is a growing group of folks who claim to be Christians who also regurgitate this nonsense. They are quite happy to stand against their own faith tradition and against the clear teachings of the Word of God as they parrot these bogus claims. 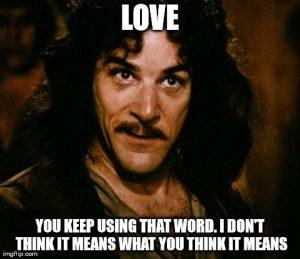 I and others have often rebutted these ridiculous and unscriptural assertions, but these folks keep on pushing them nonetheless. One of the more oft-heard and most ridiculous claims being made by these folks is the notion that “Love is All That Matters.”

There are plenty of versions of this silliness: Love is love. Love is the highest value. Love is the gospel. All you need is love. On and on these vacuous claims are offered. But for the Christian this is patent nonsense. Scripture knows nothing of these mindless assertions, and is quite clear as to what true love is.

So just what is biblical love? It is always about willing the highest good of the other person. It is seeking God’s best for them, and saying yes to God’s best always means saying no to sin, the flesh and the devil. Homosexuality is always of the latter, never of the former.

And making excuses for those trapped in deadly sinful lifestyles which is sending them to a lost eternity is hardly loving. Indeed, it is the height of hate to wink at sin, make excuses for it, and give others a false assurance that what they are doing is just peachy in God’s eyes as they continue in known, unrepented of sin.

American commentator Matt Walsh takes to task these progressive Christians who push this useless line that “love is all that matters” and we should just embrace our homosexual buddies just as they are, and let them stay that way. They claim that we should just accept everyone exactly as they are because that is what God does. Um, no. Walsh puts it this way:

This is the most common method employed by the “Christian leaders” who wish to pervert and destroy Christianity from within. Instead of publicly contradicting Christian teachings about sexuality and gender, they simply refuse to discuss the subject except to proclaim that God loves everyone regardless of what they do in the bedroom. This is supposed to be the “loving” approach. It isn’t.
It’s the coward’s approach. The traitorous approach. The selfish approach. The most efficient approach for ensuring that as many people as possible remain in their sin as they slide gleefully into Hell. I won’t call it hateful. It’s worse than hateful. It’s indifferent. What most defines “progressive” Christianity is its utter indifference to the fate of human souls. It abandons sinners to their sin. It leaves them in their confusion and intentionally feeds into the lies they tell themselves.
It is perhaps the worst thing that has happened on Earth since the Fall, because it has packed Hell so full that I wouldn’t be surprised if there’s a waiting list to get in the door. The greatest things become the worst when they are corrupted. Satan was the highest angel in Heaven before he became the ruler of Hell. Christianity — stripped of its truth, refashioned to encourage the very sins Christ died to free us from — turns into a kind of elevator transporting souls quickly and directly into the eternal fire. Loving? This sort of “love” will be little comfort down there.

The truth is, those who foolishly think that “love is love” is somehow THE defining Christian ethic, must fully go along with and bless any and all “loving relationships” that are being paraded nowadays. After all, love is love, so why stop at homosexual unions?

As I clearly warned in my book Dangerous Relations, the slippery slope is alive and well here. All sorts of relationships are now being championed today, with the call for formal state recognition and approval. These include group love, incestuous relationships, and even “love” involving animals or objects.

Consider this story from not too far back of a mother who “loves” her daughter. It begins:

A mother and her 25-year-old daughter have been accused of having an incestuous marriage. Patricia Spann, 43, and her daughter Misty Spann were married in Comanche County in Oklahoma in March, court records state. The mother, from the city of Duncan, had previously married her son Jody in 2008. He filed for an annulment 15 months later citing “incest”.
An investigation by the county’s Department of Human Services discovered the illegal relationship last month while investigating the welfare of children who were living in Patricia Spanns’ home. Misty and her two brothers were raised by a grandparent when Patricia lost custody of them, an arrest affidavit states, KFOR reported.
A DHS investigator told authorities that Patricia and Misty reunited two years ago and Patricia Spann said that she did not believe she was breaking any laws by marrying Misty as her name is not listed on her daughter’s birth certificate. She hoped that they would adopt a child.
Marrying a close relative is considered incest in Oklahoma, regardless of whether or not a sexual relationship exists.

But hey, love is love! Love is all that matters! Who am I to judge? We must be inclusive! Equal rights! Say no to bigotry! Let’s be tolerant! Embrace diversity? Say no to hate! What would Jesus do!? We must move on from all this bigotry and narrowmindedness and get with the times!

And take a look at this somewhat older case with the headline: “Grandmother and grandson to have child together”:

Pearl Carter and Phil Bailey, 26, have paid a surrogate mother £20,000 to have Mr Bailey’s child, which the couple plan to bring up together. Mrs Carter, from Indiana, met Mr Bailey four years ago after he tracked her down following the death of his mother, Lynette.
Mrs Carter fell pregnant with Lynette at 18, out of wedlock, and claims that she was forced to give her child up for adoption by her strict Catholic parents. She went on to marry, but never had any more children.
The couple, who claim to be abused in public and could face prison for incest, say that they fell in love and became lovers soon after meeting.
In an interview with the New Zealand magazine, New Idea, Mrs Carter, said: “I’m not interested in anyone else’s opinion. “I am in love with Phil and he’s in love with me. Soon I’ll be holding my son or daughter in my arms and Phil will be the proud dad.”
Mr Bailey said: “I love Pearl with all my heart. I’ve always been attracted to older women and I think Pearl is gorgeous. Now I’m going to be a dad and I can’t wait. Yes, we get laughed at and bullied when we go out and kiss in public but we don’t care. You can’t help who you fall for.”

Um, you can’t? Really. So if I fall head over heels in love with my pet border collie cross, there is nothing I can do about it? I must just give in and demand my marriage rights! Hey, sounds good to me. And by the way, I really do love my library – just can’t help it. So when is the big wedding gonna be?

And of course just recently Colombia legally recognised the union between three men. As one report puts it:

When the officiant at the ceremony says “you may now kiss the groom”, Victor Hugo Prada will have to choose which of the two men standing with him he’ll kiss first: Manuel or Alejandro. The ceremony, planned for Colombia in the coming months, will celebrate the first legalised union of three men in the country – and possibly the world.
“We want to make what’s intimate, public,” says Prada, at 23 the youngest of the three. “We have no reason to hide it. We are just helping people realise that there are different types of love and different types of family.”

Yes indeed – why hide love? It is sooo beautiful! Love is all that matters. Bingo! I could go on and on with similar cases like this. These things have been going on for quite some time now, and they simply get worse when the door to redefining marriage is opened wide.

As mentioned, I offer plenty more of these sorts of cases in my volume Strained Relations. This is not something that might happen one day – it is happening right now! Wakey, wakey! We have opened this can of worms and the bitter fruit is there for everyone to see.

There is a slope and it is exceedingly slippery. As we have warned for decades now, when you destroy the institution of marriage by redefining it out of existence – as we do when we legalise homosexual marriage – then we open the floodgates. Nothing is left to stop every single type of “love relationship” from being recognised, endorsed, legalised and solemnised.

And so much of this madness comes from those throwing around these utterly vacuous and meaningless mantras like “love is love”. It is time for some mental and moral clarity here. And this should especially be the case for those who claim to be Christians.

If we cannot even think straight on this vital issue, we might as well put up the white flag of surrender. We then are no longer acting or talking like disciples of Christ, but like mere worldlings. Just whose side are we on here?