One of the clearest teachings found in the New Testament is this: if you throw your lot in with Jesus Christ, commit to being his follower, and decide to proclaim him wherever you go, you will be hated on. There are no ifs, ands, or buts about this one – the disciple of Christ will be rejected by the world.

You cannot read the gospel accounts, the book of Acts, the epistles, or Revelation without repeatedly noting how often Christ-followers are persecuted, attacked, abused and hated – all because of their association with Christ. And of course 2000 years of church history also demonstrates this conclusively.

Trendy progressive Christians insist that if we just love a lot and don’t rock the boat, everyone will receive us and welcome us. Sorry, but no go. The most loving and gracious man to walk the earth was Jesus, yet still the world rejected him.

Sure, some folks did receive him and follow him, but for the most part, the crowds rejected him. They wanted nothing to do with him. They wanted him out of their lives. In my morning reading I again came upon this basic truth. We find these amazing words in Matthew:

“Then the whole town went out to meet Jesus. And when they saw him, they pleaded with him to leave their region” (Matthew 8:34). Wow, what a brief but telling look at how Jesus was received. Are you having trouble getting people to love you and accept you because you are a Christian? Well, welcome to the club. 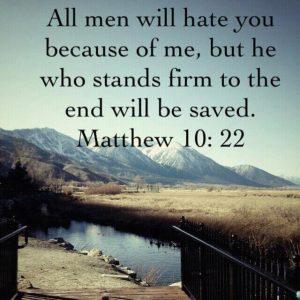 You are simply following in Jesus’ footsteps. Nothing new here. Nothing out of the ordinary. You are just being treated as Jesus was treated. Now of course we must be careful here. Some Christians are being rejected and disliked, not because they are so Christlike, but because they may just be real chumps!

They may be obnoxious, annoying, uncaring pests who of course rightly repel people. So we must take care here: if you are shunned by the world, is it because you are living a real Christian life, or because you are just a pain in the butt to be around? It is always good to be doing a bit of a check-up here in this regard.

But having said that, if we seek to be as Christ-like and Spirit-filled and gracious and loving as we can be, we will still be rejected by the world. Let me go back to this passage for a moment. The context of this story is found in Matthew 8:28-34. It involves the episode of how Jesus restored two demon-possessed men:

When he arrived at the other side in the region of the Gadarenes, two demon-possessed men coming from the tombs met him. They were so violent that no one could pass that way. “What do you want with us, Son of God?” they shouted. “Have you come here to torture us before the appointed time?” Some distance from them a large herd of pigs was feeding. The demons begged Jesus, “If you drive us out, send us into the herd of pigs.”
He said to them, “Go!” So they came out and went into the pigs, and the whole herd rushed down the steep bank into the lake and died in the water. Those tending the pigs ran off, went into the town and reported all this, including what had happened to the demon-possessed men. Then the whole town went out to meet Jesus. And when they saw him, they pleaded with him to leave their region.

We can see a big reason here for the rejection of Jesus: obviously the owners of the pigs were quite upset about all the financial loss involved. In the account of this story found in Mark we learn that the swine numbered about two thousand (Mark 5:13).

No wonder they got so angry. And of interest, we find this often in the days of the early Christian community. The world especially goes ballistic when the proclamation of the gospel leads to any sort of financial loss. For example, we read about riots occurring in the book of Acts following gospel presentations which led to ruined businesses and the like.

In Acts 16:16-40 for example we read about how a demon was cast out of a female slave by Paul and Silas. She had “earned a great deal of money for her owners by fortune-telling”. When they found out her money-making abilities were now gone, all hell broke loose.

We find the same in Acts 19:23-41 where we learn about a “silversmith named Demetrius, who made silver shrines of Artemis, brought in a lot of business for the craftsmen there.” He railed against Paul and his anti-idol gospel, and as a result a riot broke out in Ephesus.

But even if money and its loss is not involved, there will be a zillion other reasons why the world will reject and hate on Christians. As mentioned, we have plenty of promises to this effect by Jesus and the disciples. These would include the following:

Matthew 5:10 “Blessed are those who are persecuted because of righteousness, for theirs is the kingdom of heaven.”

Matthew 10:22-23 “You will be hated by everyone because of me, but the one who stands firm to the end will be saved. When you are persecuted in one place, flee to another.”

Mark 13:9-13 “You must be on your guard. You will be handed over to the local councils and flogged in the synagogues. On account of me you will stand before governors and kings as witnesses to them. And the gospel must first be preached to all nations. Whenever you are arrested and brought to trial, do not worry beforehand about what to say. Just say whatever is given you at the time, for it is not you speaking, but the Holy Spirit. Brother will betray brother to death, and a father his child. Children will rebel against their parents and have them put to death. Everyone will hate you because of me, but the one who stands firm to the end will be saved.

Luke 6:22-23 “Blessed are you when people hate you, when they exclude you and insult you and reject your name as evil, because of the Son of Man. Rejoice in that day and leap for joy, because great is your reward in heaven. For that is how their ancestors treated the prophets.”

John 16:2-4 “They will put you out of the synagogue; in fact, a time is coming when anyone who kills you will think he is offering a service to God. They will do such things because they have not known the Father or me. I have told you this, so that when the time comes you will remember that I warned you.”

Acts 23:12-15 The next morning some Jews formed a conspiracy and bound themselves with an oath not to eat or drink until they had killed Paul. More than forty men were involved in this plot. They went to the chief priests and the elders and said, “We have taken a solemn oath not to eat anything until we have killed Paul. Now then, you and the Sanhedrin petition the commander to bring him before you on the pretext of wanting more accurate information about his case. We are ready to kill him before he gets here.”

2 Corinthians 4:8-10 We are hard pressed on every side, but not crushed; perplexed, but not in despair; persecuted, but not abandoned; struck down, but not destroyed. We always carry around in our body the death of Jesus, so that the life of Jesus may also be revealed in our body.

1 Thessalonians 3:4 In fact, when we were with you, we kept telling you that we would be persecuted. And it turned out that way, as you well know.

2 Timothy 3:12 In fact, everyone who wants to live a godly life in Christ Jesus will be persecuted.

As I say, it should come as no surprise that those in the surrounding culture do not exactly welcome you with open arms when you seek to represent Christ and proclaim biblical truth and values in the public arena. In fact, if you are not getting the same reaction that Jesus and the disciples got, you may need to ask yourself some hard questions!

If everyone in the world just loves you to pieces and thinks you are just peachy, maybe you are not quite being the salt and the light you are called to be. Let me finish with a few quotes from some of the great saints who have gone before:

“You were once a servant of Satan, and no king will willingly lose his subjects. Do you think that Satan will leave you alone? No, he will always be at you, for he ‘prowls around like a roaring lion, seeking someone to devour.’ Expect trouble, then, Christian, when you look beneath you. Then look around you. Where are you? You are in enemy country, a stranger and an alien. The world is not your friend. If it is, then you are not God’s friend, for whoever is the friend of the world is the enemy of God. Be certain that you will find enemies everywhere. When you sleep, remember that you are resting on the battlefield; when you travel, suspect an ambush in every hedge. As mosquitoes are said to bite strangers more than natives, so the trials of earth will be sharpest to you.” Charles Spurgeon

“I was honored today with having a few stones, dirt, rotten eggs, and pieces of dead cat thrown at me.” George Whitefield

“The world never burned a casual Christian at the stake.” John R. Rice

“A true man of God prepares God’s people for persecution. The false teaches them how to avoid it.” David Pawson

“If you are suffering as a Christian, and because you are a Christian, it is one of the surest proofs you can ever have of the fact that you are a child of God.” Martyn Lloyd-Jones

6 Replies to “The World’s Rejection of Christians”