I am not exactly in prison at the moment, but it kinda feels like it. You see, I am once again in Facebook jail. I have been banned by the FB thought police yet again. For daring to say something that they do not like, they have banned me from my own page, and we have yet another case of PC censorship.

It is the old, “Look’s like you’ve had a bit too much to think” situation. The leftist overlords at FB do not want reality, facts and truth to get in the way of their radical agenda. So anyone who dares to proclaim truth on their pages can and will be subject to Big Brother treatment. 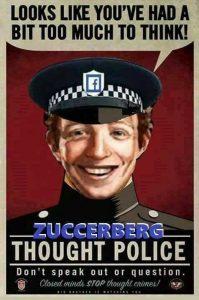 Increasingly more and more people I know are getting the same sort of censorship from FB, with bans often far more than just a day: sometimes it is a week or even a month. In theory this is a business that really wants money from folks to make a nice profit, so the more users the better.

More people on FB means more income for them (mainly coming from advertising). But it seems they would rather major in being thought police than in allowing for a free flow of ideas and information. And I can tell you all the censorship has been one way traffic.

I see some of the most vile and despicable stuff coming from the left, from the atheists, from the homosexuals, and so on. Even when concerned users complain about this stuff, nothing is done. But dare to criticise homosexuality, or transgenderism, or Islam, or any other leftist shibboleth, and all hell will break loose.

So what was meant to be a neat social media device to help people share stuff with one another has now become yet another leftist indoctrination centre, where any verboten thoughts and ideas will be eliminated. So too will be those who dare to share such thoughts.

Of course none of this should come as a surprise. I and others have been documenting FB censorship for quite some time now. As an example, seven years ago I reported on this frightening headline from October 21, 2010: “Facebook Teams Up with Gay Activist Orgs to Stop ‘Hateful’ Comments”.

Indeed, this is one of the most severe areas of PC censorship: dare to say things critical of the homosexual and transgender agendas, and you will go straight to FB jail. That was the case with my most recent sin bin episode – one that I am still experiencing.

My apparently really horrible post that caused the FB censors so much angst and turmoil can be seen in the top line of images here: www.google.com.au/search?q=gender+mental+disorders&rlz=1C1NHXL_enAU712AU712&source=lnms&tbm=isch&sa=X&ved=0ahUKEwjm662xq93WAhUD2LwKHcnkAVkQ_AUICigB&biw=1280&bih=628&dpr=1.5#imgrc=_

The odd thing is, it is a meme that I would have used before on FB. Indeed, I have seen it around lots of times there. There seems to be little rhyme or reason to the FB censors. It seems the army of FB thought police show up for work every morning on a search and destroy mission, seeking out any conservatives and Christians they can ban.

As to the meme itself, what is wrong with it? Like any meme, it can say only so much. But I always back up a meme that I post with more commentary and/or a link to an article I have penned on the topic. In the case of transgenderism, I have written 120 pieces on this topic.

In such articles I of course go into much more detail, explaining what I am trying to say. And I will often include words like: “These folks obviously need help, treatment, counselling, etc”. It is not just people like me who think there is a mental disturbance going on when a guy thinks he is a girl, etc, but many experts have said exactly the same.

Indeed, I have often quoted these folks. Let me mention just one who I have cited before. Here he is again:

Dr. Paul R. McHugh, the former psychiatrist-in-chief for Johns Hopkins Hospital and its current Distinguished Service Professor of Psychiatry, said that transgenderism is a “mental disorder” that merits treatment, that sex change is “biologically impossible,” and that people who promote sexual reassignment surgery are collaborating with and promoting a mental disorder.
Dr. McHugh, the author of six books and at least 125 peer-reviewed medical articles, made his remarks in a recent commentary in the Wall Street Journal, where he explained that transgender surgery is not the solution for people who suffer a “disorder of ‘assumption’” – the notion that their maleness or femaleness is different than what nature assigned to them biologically.
He also reported on a new study showing that the suicide rate among transgendered people who had reassignment surgery is 20 times higher than the suicide rate among non-transgender people. Dr. McHugh further noted studies from Vanderbilt University and London’s Portman Clinic of children who had expressed transgender feelings but for whom, over time, 70%-80% “spontaneously lost those feelings.”

So here we have one of the world’s leading authorities on this issue saying as plain as day that transgenderism is a mental disorder. Um, the meme I shared – the one found to be entirely taboo in the eyes of the Big Brother brigade at FB – said exactly the same thing.

It said there are two genders, and the rest are mental disorders. Simply to make a statement like this, verified by top authorities on the matter, is to fall afoul of the FB Stasi. So has FB also banned Dr McHugh as well? Do they delete any posts he might put up, if he is on FB?

Again, in my articles I will explain things further. I will state that there is a very tiny percentage of people who do have a genuine Intersex condition in which we do find ambiguous genitalia and the like. This is not only an exceedingly rare condition, but it also has absolutely nothing to do with the homosexual bandwagon, or with 99+ per cent of those who say they want to change their gender.

Thus a meme by definition will not convey all the truth on a given issue, but it alerts you to the heart of the issue, and at least in my case, I will offer detailed articles laying out my case, elaborating on what is found in such memes. But all this is just too much for the very small minds at FB it seems.

They cannot handle such things. Sure, anti-Christian bigotry and hatred is allowed every day of the week there. It is just a question of being on the right side of the politically correct fence. Dare to say something critical of the various leftist idols and you too will feel the wrath of FB.

So much for free speech. So much for public debate on important issues. So much for sticking with the rainbow warriors at FB. The words uttered by Brendan O’Neill just a few hours ago are worth running with here:

“Free speech is in serious danger. The worst danger it has been in for a generation. I can’t remember in my lifetime a climate as hostile to free expression as the one we’re living through right now.”

Yes quite right, on so many levels. It is high time to find an alternative to the censorious FB.

BTW, since I cannot share this article on FB at the moment, maybe some of you can do it on my behalf!

29 Replies to “Come Visit Me In Prison”