Today however the left in general and the homosexual activists in particular are demanding the right to marriage, claiming it is the most important thing there is. So which is it? Is it just a waste of time or is it a necessity? Of course we know the answer to this already.

Marriage has never really been wanted by most homosexuals, and it is only the symbolic effect – plus the power and control that goes with it – that they seek through the redefinition – and thus destruction – of marriage. But all that I have documented in great detail elsewhere. 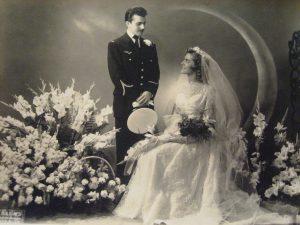 But let me look more closely at just one of the charges thrown around by the marriage attackers – at least up until recently. The claim that marriage and family are relatively recent inventions – often claimed to have originated in the US in the 1950s! – deserves a response.

The simple answer is this: heterosexual marriage – the union of one man and one woman – is a historic and universal institution. The evidence for this is overwhelming. So all that I can do here is cite a number of experts who have done very thorough studies of such matters.

With so much material to choose from here, I have to be rather selective. But all the full quotes and references for this – and much more – are found in my book Dangerous Relations. Let me begin with family law expert Lynne Marie Kohn who stated, “Marriage was not invented, codified, or planned by human government. Rather, human government gave the stamp of approval to a design already manifested, honored, maintained, and flourishing.”

American professor of law William Duncan puts it this way:

Marriage preexisted the state and is recognized (not created) by the state because of its intrinsic value. This is not a theological point. Whether one understands that marriage preexisted state recognition as a matter of religious belief or whether one believes that marriage has developed from the machinations of a ‘selfish gene,’ one thing is clear – marriage did not come into being by statute… It is not, therefore, wholly malleable.

Or as family researcher Jennifer Roback Morse puts it,

Marriage is an organic, pre-political institution that emerges spontaneously from society… Government does not create marriage any more than government creates jobs. Just as people have a natural ‘propensity to truck, barter and exchange one thing for another,’ in Adam Smith’s famous words from the second chapter of The Wealth of Nations, we likewise have a natural propensity to couple, procreate, and rear children. People instinctively create marriage, both as couples and as a culture, without any support from the government whatsoever.

There is one big difference between human beings and chimpanzees and that is the institution we call marriage. In virtually all human cultures, including hunter-gatherer societies, males monopolise their mates, and vice versa. Even if he ends up with more than one wife … each man enters a long-term relationship with each woman who bears his children… Long-term pair bonds are not a cultural construct of our particular society; they are a habit universal to our species.

Families have always been defined by the male/female relationship, and children have almost always been raised within that unit. Few exceptions can be found. As Bronislaw Malinowski put it,

I know of no single instance in anthropological literature of a community where illegitimate children, that is children of unmarried girls, would enjoy the same social treatment and have the same social status as legitimate ones. The universal postulate of legitimacy has a great sociological significance … It means that in all human societies moral tradition and the law decree that the group consisting of a woman and her offspring is not a socially complete unit. The ruling of culture runs here … it declares that the human family must consist of a male as well as a female.

The raising of children has in most cultures taken place within that male/female relationship. This was one of the discoveries made by Margaret Mead: “When we survey all known societies, we find everywhere some form of the family, some set of permanent arrangements by which males assist females in caring for children while they are young.”

Not only is marriage and family defined by the male/female relationship, but by a life-long commitment as well. Says Mead: “No matter how free divorce, how frequently marriages break up, in most societies there is the assumption of permanent mating, of the idea that the marriage should last as long as both live… No known society has ever invented a form of marriage strong enough to stick that did not contain the ’till death us do part’ assumption.”

Marriage is important for a variety of reasons, but one main reason historically has been the need to bind fathers to the mother-child relationship. Marriage, simply put, helps to civilise young men and refocus their energies into productive and committed relationships.

This is a common understanding in the findings of anthropology. As Margaret Mead once said, “The central problem of every society is to define appropriate roles for the men.” Or as George Gilder more crudely puts it, marriage is all about “taming the barbarians.”

Biology, anthropology, and history all tell the same story. Every society, each generation, faces an invasion by barbarians… These barbarians are young men and boys, in their teens and early twenties. If the truth be known, all too many of them are entirely unsuited for civilized life. Every society must figure out ways to bring them into the disciplines and duties of citizenship.

Gilder is right in this regard: men simply need extra incentives to get married and stay married. As Sociologist David Popenoe explains, “biology was never enough to hold a father to the mother-child bond. That’s why every society has set up the institution of marriage – virtually every society – and they did it for this purpose of holding the father to the mother-child bond. They realized that the outcome for the children would be better.”

Keeping husbands to their wives, and fathers to their children, is crucial here. Popenoe further explains:

In recognition of the fatherhood problem, human cultures have used sanctions to bind men to their children, and of course the institution of marriage has been culture’s chief vehicle. Marriage is society’s way of signaling that the community approves and encourages sexual intercourse and the birth of children, and that the long-term relationship of the parents is socially important. Margaret Mead once said, with the fatherhood problem very much in mind, that there is no society in the world where men will stay married for very long unless culturally required to do so.

As David Blankenhorn puts it, “In the study of kinship, a central finding of anthropology is that in the crucial area of filiation – defined as who the child affiliates with, emotionally, morally, practically, and legally – the overwhelming majority of human societies are bilateral. Almost all human societies strongly seek for the child to affiliate with both its mother and its father.”

At this point some might argue that polygamy in its various forms has been a notable feature of many cultures throughout history. The short answer to this objection is both yes and no. Polygamy has certainly existed, but it appears to be the exception, not the rule.

Philosopher Stephen Post puts it this way: “Historically, men have a reasonably strong record of monogamy. When polygamy has existed, it has been almost entirely the result of the sheer power of despots over men and women.” Or as Matt Ridley notes in his book on sex and the evolution of human nature, “even in openly polygamous societies, most men have had only one wife and virtually all women have only one husband.”

Another philosopher, Michael Levin unites these various truths in this way: “Some societies have favored polygamy, a few polyandry; in some societies a number of married couples live together under a communal roof, while in others each of the basic units live separately. But no society has tolerated reproductive units with more than one member of both sexes, a temporary bond, or sex outside the reproductive unit.”

The harems of ancient despots … cannot have been typical of the human condition for most of its history… In many ways modern people probably live in social systems that are much closer to those of their hunter-gatherer ancestors… No hunter-gatherer society supports more than occasional polygamy; and the institution of marriage is virtually universal. People live in larger bands than they used to, but within those bands the kernel of human life is the nuclear family: a man, his wife and children. Marriage is a child-rearing institution: wherever it occurs the father takes at least some part in rearing the child even if only by provision of food. In most societies, men strive to be polygamists; but few succeed. Even in the polygamous societies of pastoralists, the great majority of marriages are monogamous ones. It is our usual monogamy, not our occasional polygamy, that sets us apart from other animals, including apes.

In sum, marriage and the nuclear or extended family, appear to be the norm throughout human history. And children have almost always been raised by their biological parents. The novel idea that marriage can now be declared to be whatever we want it to be, and children can do just peachy in any type of family structure, is clearly at odds with the historical record.

9 Replies to “Marriage and History”