Those who hate the traditional married family unit utilise all sorts of means to attack it, denigrate it, and undermine it. One quite common ploy used over the past few decades is to claim that the family structure of mum, dad and the kids, cemented by marriage, is an historical aberration.

They say this is really just a fluke of history, and they even claim that it only really ever existed in the 1950s! This sort of radical historical revisionism and social deconstructionism has been heard far too often by those on the left. But it just happens to be patent nonsense.

It is the same propaganda stunt that Hitler’s Propaganda Minister Joseph Goebbels spoke about: “If you tell a lie big enough and keep repeating it, people will eventually come to believe it.” So the leftists, feminists, and homosexual activists have been rehashing this lie for years now. 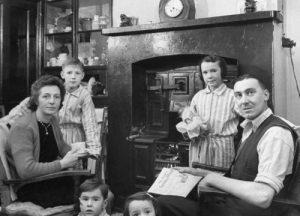 Let me offer just a few examples of this. One Melbourne University academic and lesbian activist spoke of “the continuation of outdated 1950s family values that are deeply homophobic and fearful of women raising children without men”.

Or as one Australian leftist put it: “The ‘50s were the golden era of the nuclear family. It wasn’t the way it was before or the way it has been since. It’s an historical blip, an aberration”.

We get more of the same from a professor who said that today’s nuclear family is an “aberration” left over from the 40s and 50s. “It’s not functional now, and it never has been. That is why this type of family is surrounded by so much legislation and moral discourse. It needs propping up because it’s not a natural unit.”

So the natural family is an aberration, is not natural, and it is simply a relic of the 1950s! The ability of the ideological left to simply make things up as they go along, and to boldly and blatantly rewrite history is absolutely shocking. But sadly it happens all the time.

So what is the truth of the matter? It certainly is NOT what the activists and militants are trying to tell you. The historical, anthropological and sociological record is quite clear: the traditional family unit, cemented by marriage, is not just a 1950s social construct.

It has in fact been the predominant form of family life in most cultures throughout history. The evidence is all too plain for anyone without ideological blinders to see. Let me offer just a few representative quotes here. Let me begin with sociologist Peter Berger:

“Recent research into the history of the family, both in Western Europe and in northern America, shows that the nuclear family, far from being a product of modernization processes (such as urbanization and industrialization), antedates these processes by centuries”.

Indeed, the family antedates the state as well. Writing two and a half millennia ago, Aristotle put it this way: “Man is by nature more inclined to live as a couple than to associate politically, since the family is something that precedes and is more necessary than the State.”

The family not only spans the centuries, but it extends across cultures as well. Bronislaw Malinowski was the first great anthropologist to live among primitive peoples. After years of research and painstaking observations of the daily habits of these people, he came to see that the family was a universal institution:

Indeed, at first sight, the typical savage family, as it is found among the vast majority of native tribes … seems hardly to differ at all from its civilized counterpart. Mother, father, and children share the camp, the home, the food, and the life… Attached to each other, sharing life and most of its interests, exchanging counsel and help, company and cheer, and reciprocating in economic cooperation … the individual, undivided family stands out conspicuous, a definitive social unit marked off from the rest of society by a clear line of division.

Another important anthropologist, Robert Lowie, notes that communal arrangements in sexuality and child-rearing are the exception, whereas families are the universal norm:

Sexual communism as a condition taking the place of the individual family exists nowhere at the present time; and the arguments for its former existence must be rejected as unsatisfactory … we are justified in concluding that regardless of all other social arrangements the individual family is an omnipresent social unit… [T]he one fact stands out beyond all others that everywhere the husband, wife and immature children constitute a unit apart from the remainder of the community.

The nuclear family is a universal human social grouping. Either as the sole prevailing form of the family or as the basic unit from which more complex familial forms are compounded, it exists as a distinct and strongly functional group in every known society. No exception, at least, has come to light in the 250 representative cultures surveyed for the present study… In no case have we found a reliable ethnographer denying either the existence or the importance of this elemental social group… The nuclear family is always recognizable and always has its distinctive and vital functions.

Noted sociologist Amitai Etzioni has put it this way: “There never was a society throughout all of history … without a family as the central unit for launching the education of children, for character formation, and as the moral agent of society.”

In every community and for as far back in time as we can probe, the family exists and children are expected, without exception, to be raised in one. By a family I mean a lasting, socially enforced obligation between a man and a woman that authorizes sexual congress and the supervision of children. Its style and habits will vary greatly, of course, but nowhere do we find a place where children are regularly raised by a mother who has no claims on the father.

And again, “The family is not only a universal practice, it is the fundamental social unit of any society.” This seems to be the constant pattern of history. As the Times Literary Supplement Editor, Ferdinand Mount has commented,

The family is not an historical freak. If the evidence we have put together is correctly interpreted, the family as we know it today – small, two-generation, nuclear, based on choice and affection…is neither a novelty nor the product of unique historical forces. The way most people live today is the way most people have preferred to live when they had the chance.

Michael Levin, professor of philosophy at the City College of New York, puts the case even more forcefully:

Human beings have always been reared within “traditional” families. It is true that in many cultures children are raised after infancy by communal groups, but these groups are generally composed of mothers who know each other. Not only has there never been an open, democratic society not based on the family, there has never been any society of any sort not based on the family. In every society a child’s upbringing has been the responsibility of close blood relations, with his daily care a female task and his protection a male task. Some societies have favored polygamy, a very few polyandry; in some societies a number of married couples live together under a communal roof, while in others each of the basic units live separately. But no society has tolerated reproductive units with more than one member of both sexes, a temporary bond, or sex outside the reproductive unit.

Given all these claims, one has to ask, why should there be any doubt that the traditional family is the norm? One anthropologist from Boston University looks at why so many social scientists are hostile to marriage and family and are quite happy to ignore or skew the historical record and the social data:

Anthropology – hometown to cultural relativists and all-night diner for disaffected intellectuals – may not be where you would most expect to find good reason to defend traditional American family values. But anthropology, in fact, guards a treasure house of examples of what happens when a society institutionalizes other arrangements…
The Leftist political convictions of many of my fellow anthropologists tend to keep them silent about some of the scientific findings that have accumulated over 150 years or so of systematic ethnographic study. But these findings strongly suggest that the family is a bedrock institution and that the kinds of modifications to the family advocated by gays, feminists, and others who speak in favor of relaxing traditional restrictions on sexual self-expression will have huge consequences.

Without the family, social cohesion would be much more difficult to achieve. As late Harvard sociologist Pitirim Sorokin has said, the family is the “first fundamental form of social relationships.” The words of Simon Leys offer a fitting summary:

The family has stood as the most enduring and successful experiment in the entire cultural history of mankind… In the history of the civilised world, no substitute has ever been found for the family. Any society that allows it to disintegrate, or endeavours actively to destroy it (as we are now doing here) does it at its own horrific risks and costs… That such a matter of common sense could become now a subject for challenge and debate is a telling sign of the times. Chesterton said it well: ‘when common sense ceases to be common, a society is in terminal decay’.

Note: All the information offered in this article is fully documented and referenced in my 2014 book, Dangerous Relations.

13 Replies to “No, Traditional Marriage and Family Are Not ‘Recent Inventions’”