A wonderful woman, a single mother with 13 children, has just found out that her deep care for unborn children will cost her dearly. For daring to show love to mothers who are heading off to the abortion mills, she has just been slugged with a very hefty fine.

So in the People’s Republik of Victoria where the Dan Andrews’ government has declared war on faith, family, and freedom, this wonderful mother now has to pay the price. Victoria is clearly the most anti-Christian, secular left state in the nation, and those who dare to defy its evil decrees will be strongly punished.

I have written before about this brave warrior for life, Kathy Clubb: billmuehlenberg.com/2016/08/04/ordinary-people-become-extraordinary-warriors/ 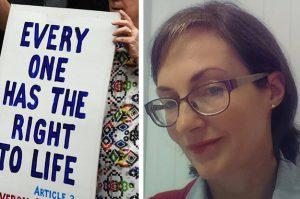 This is what Kathy has just posted:

Today at the Melbourne Magistrate’s Court, I was found guilty of prohibited behaviour within an abortion facility exclusion-zone. For the crime of offering help to women, I was fined $5000 – which is fortunately not the maximum penalty. Many thanks to everyone who has been praying for me and for my lawyers: your prayers are never wasted. We will continue to draw attention to this unjust law.

Yep, this is what Dictator Dan’s police state looks like – those who love babies WILL be punished! Kathy provides background to what just took place today. Let me share it with you:

About My Legal Challenge to Victoria’s Safe Access Zones

In August 2016, I was arrested for offering help to a couple outside a Melbourne abortion business. The arrest was made under Victoria’s Safe Access Zone Amendment. For the past 15 months, I’ve made many appearances in the Magistrate’s Court, and today, October 11th, the magistrate found me guilty. I’ve been fined $5000 for attempting to save a baby from being killed and for trying to save its parents from a lifetime of regret.

What are ‘safe-access’ zones?
‘Safe-access’ zones are found in several countries and are really exclusion zones – also known as buffer or bubble zones. They create spaces where pro-lifers are prohibited from witnessing publicly about abortion. The prohibited behaviour may include silently praying, holding signs, conversing about abortion or approaching abortion-minded mothers. These zones usually take the form of a circle with an abortion facility in the centre, although some are floating zones around the mothers themselves. The size of the zones varies in different parts of the world, with some as small as 6 metres. Two Australian states have the largest zones in the world: 150 metres. In Victoria, the penalties are particularly severe.

Who benefits from exclusion zones?
The main beneficiary from bubble zones is the abortionist. It’s not uncommon for women to choose life for their babies outside abortion facilities where life advocates gather, and this means lost revenue for abortionists. By enacting exclusion zones, abortion providers are more likely to be able to take the life of each child scheduled to be killed that day, which means more income. It’s simple math.

Who is harmed by exclusion zones?
Everyone is harmed by exclusion zones. Abortion providers and their staff have less chance of acknowledging the truth about their gruesome business and leaving the industry. Law-makers and the general public have fewer opportunities to learn the truth about abortion, or even that a facility exists in their midst.
Experience has shown us that there are some mothers who will choose life at the eleventh hour, right outside the facility that is scheduled to kill their children. These mothers say things like: “If not for the pro-life advocates outside that abortion clinic that day and the advice they offered about other options, I would also have ended that pregnancy – and my beautiful daughter would not be here today.”
These distressed women need an offer of help at that crucial moment. ‘Safe-access’ zones deny these women that final choice. The opportunity for mothers to change their minds and accept help at the last moment is all but destroyed. Parents and partners also lose the ability to try and influence a mother to choose life for her child. More babies die and are lost to the world forever. Another facet of exclusion zone legislation is the infringement on our freedom of political communication and on religious freedom. These laws are totalitarian in nature.

The Spiritual Dimension
If you believe, as I do, that humans possess an immortal soul and can be guilty of very serious sin, then you’ll agree that exclusion zones decrease the chance for conversion and repentance from the grave sin of abortion.
In places without exclusion zones, mothers who leave an abortion facility after an abortion are sometimes met by pro-lifers who can offer them the hope of forgiveness, direct them to counselling or even affirm their dignity by simply make eye contact. Exclusion zones also take away that hope from post-abortive mothers.

As Kathy just told me: “All I did was offer help to women outside an abortion facility. I was trying to save a baby and to save its parents from a lifetime of regret.” She also told me: “I’m very concerned about the impact of this law on our freedom of political communication.”

She continued: “We must definitely pray for our parliamentarians, who need their eyes opened to the horrors of abortion.” Yes we sure do Kathy. So many of them are utterly clueless about all this. We must get the truth about abortion – and this terrible law – out there.

Kathy, you are an inspiration. We need to do all we can to help this courageous woman. We need to start a crowd funding campaign for her. Anyone know how to do this? We love you Kathy! You are a true champ! Keep standing strong and God bless you!

At the end of this link you can find a place to help donate to Kathy: