Moments ago the High Court, meeting in Brisbane, handed down a decision that will have a big impact not only on a handful of brave individuals, but on the whole country. It had to do with freedom of speech and the right to peaceful protest. But let me first offer some background to all this.

Some of the greatest unsung heroes of our time are those that most people may have never heard about. These folks are often just ordinary citizens, including quiet and dedicated homemakers. Two such people are the prolife champions Kathy Clubb from Melbourne and Graham Preston from Brisbane. 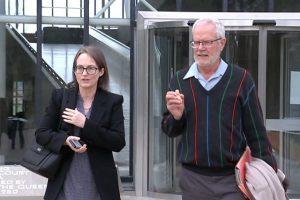 The first time I wrote about her was in 2016 when she was the first person to be arrested as a result of Victoria’s draconian and unjust exclusion zone law that had passed late in 2015:
billmuehlenberg.com/2016/08/04/ordinary-people-become-extraordinary-warriors/

A year later I wrote about how she was found guilty and slugged with a very hefty fine for daring to offer help and hope to mothers and their babies. I discussed that outcome here:
billmuehlenberg.com/2017/10/11/mother-punished-loving-babies/

But she did not just accept this decision – she challenged it, seeking to argue that these exclusion zones which keep prolifers away from abortion mills were unconstitutional. Early in October of last year she sought to make that case in the High Court.

For a half a year now she and Graham have been waiting on the decision from Australia’s highest court concerning this case in particular and the validity and legality of bubble zone laws in general. In Victoria these laws mean that no pro-lifer can get closer than 150 metres to an abortion clinic.

She knew that the decision would be important not just for her, but for the whole nation. As she wrote last week:

Yesterday, I prayed at the exclusion-zone with mixed feelings. It was my last shift of 40 Days for Life before the High Court gives their verdict. Next week when I go back, there’s a possibility that the law will have been struck down and the exclusion-zones will be gone. But there’s also the possibility – too awful to contemplate – that exclusion-zones will still be there, and that every state will be free to implement them. Whatever happens, no one can ever stop any of us from praying to end abortion.
Fiat voluntas tua.

Well, we now have that decision. Sadly, and perhaps not unexpectedly, it has gone against the pair, and against life. The Court dismissed their challenge and ruled that their fines will stand and they will have to bear the court costs. Said Kathy Clubb: “It’s bad enough that so many babies are killed but today free speech has been killed.”

Yep. Just the other day major parts of the Melbourne CBD were shut down by vegan militants. Will they pay any price for their actions? I won’t hold my breath on that one. Perhaps a case could be made that exclusion zones for feral vegans should be established.

Yet peaceful prolifers who usually just pray in silence are banned from getting anywhere near those they are trying to reach out to in love. Go figure. More news about the court outcome will be coming soon, so I will be adding updates as they come to hand. In the meantime, let me offer more background.

political communications about abortions are often at their most effective when they are engaged in at the place at which abortions are provided. It is no different in that respect to a communication on the ethics of animal rights, gay marriage, euthanasia or discrimination — once a mind is changed on the ethics, the politics will often follow. That a communication is unpopular or reflects a view held only by a minority does not deny it the protection of the freedom.

An article from the Australian last year also said this:

In their submission, they say: “Australian history is replete with examples of political communications being effective precisely because they are conducted at the place where the issue is viscerally felt.” There’s the Franklin Dam blockade, for example, and the Pine Gap protests, the Freedom Rides and the Eureka Stockade.

Clubb’s team acknowledges that her protest isn’t popular, and that too is important because the “very purpose of freedom” is to permit the expression of unpopular, minority view points. “In order to rouse, political speech must first excite,” the submission says. “Sir Robert Menzies’ ‘forgotten people’ speech, Paul Keating’s Redfern speech, Kevin Rudd’s apology … each was apt to cause discomfort not incidentally but deliberately.”

It will not be an easy case for Clubb to win. Australia has no proud free speech tradition. Four states and the commonwealth have already made submissions aimed at silencing her protest. But in her pocket Clubb has what she believes is a reason to keep going. It’s a short video, stored on her phone, of a child she describes as “the last baby we saved”.

“His parents are Nepalese, they hadn’t been in Australia very long,” she says. “They approached the clinic and I could see they didn’t want to do it.” She helped them away from the door, into a nearby carpark, where the mum-to-be, buckled by morning sickness, vomited. They explained their circumstances: he was working in a convenience store, earning not much money. She was newly arrived and now pregnant. They didn’t have stable accommodation. The GP had given them a pamphlet for the abortion clinic.

“I told them we could help,” says Clubb, and the groups with which she works stepped up with money for rent, doctor’s fees, a cot and a car seat. The child being carried in the womb that day is now a two-year-old. In the video, he’s bopping along to an Ed Sheeran song. “I believe we did God’s work that day,” says Clubb.
www.theaustralian.com.au/nation/inquirer/kathleen-clubb-defends-right-to-challenge-abortion/news-story/614b0a5a9593502d6d040f20606674fe

Yesterday a lengthy article appeared discussing this case. It offers further background information to this case, but it is highly biased and prejudiced, so read with care:
www.buzzfeed.com/ginarushton/kathy-clubb-high-court-abortion-safe-access

And a 5 minute video of Kathy and her case made before the ruling is found here: www.youtube.com/watch?v=-h4xg7SjHHE&t=1s&fbclid=IwAR2mdny7UYEuCEo9L_7XjFr5oUJYoWFaAzzE4wqbUglXYJuvkiDSWuVthMk

Kathy is of course just one of our heroes. Others have been willing to pay the price for standing up for the unborn. As mentioned, Graham Preston was also a part of this court case. He has spent plenty of time behind bars for this very reason. He too has been the subject of some of my articles, eg., billmuehlenberg.com/2014/03/04/stand-up-for-babies-you-will-be-arrested/

At the very least we need to pray for such superstars. And it is also so very important to join them in peaceful protests outside of the baby abattoirs, even if you need to stay 150 metres away – or be willing to pay the price for violating these unjust laws.

This is a very sad day for Kathy and Graham, for Australia, and for babies.