So what does the Australian Rugby star and the great apostle of 2000 years ago have in common? Both are followers of Jesus Christ and both take their faith seriously. And they take sin seriously, speaking out on it when they can. Both have warned people that the consequences of sin is death and eternal judgment.

And both have been hated on for speaking the truth. Paul constantly got into trouble for sharing God’s truth with those who did not want to hear it, and so has Israel Folau. Indeed, I have written several pieces on the Australian sportsman already. See here: billmuehlenberg.com/2018/04/06/folau-and-unacceptable-truth/ 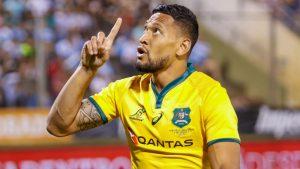 As to the Apostle Paul, let’s look at how he described his lot, as he spoke truth, shared the gospel, and warned sinners of their fate. In 2 Corinthians 11:23-27 we read:

Hmm, it seems most folks really did not like it when Paul shared biblical truth. Most folks hated it, and they reacted to his preaching accordingly. And nothing has changed. For two thousand years Christians have been hated on for preaching the gospel.

That is always the way it is. As Jesus forewarned, people love darkness rather than light, and they will hate his messengers just as they hated him. This is as basic as you can get. Sharing Christian truth WILL always offend people. And it is Folau who is again feeling the heat big time for daring to share biblical truth in public.

He had recently responded to the news that Tasmania has passed new legislation making gender optional on birth certificates. To this he replied: “The devil has blinded so many people in this world, REPENT and turn away from your evil ways. Turn to Jesus Christ who will set you free”.

He also posted an image on Instagram with these words: “Warning – drunks, homosexuals, adulterers, liars, fornicators, thieves, atheists, idolaters – hell awaits you. Repent! Only Jesus saves.” Next to this image were these biblical truths and passages:

Those that are living in Sin will end up in Hell unless you repent. Jesus Christ loves you and is giving you time to turn away from your sin and come to him.

Now the works of the flesh are manifest, which are these , adultery, fornication, uncleanness, lasciviousness, idolatry, witchcraft, hatred, variance, emulations, wrath, strife, seditions, heresies, envyings, murders, drunkenness, revelings, and such like: of the which I tell you before, as I have also told you in time past, that they which do such things shall not inherit the kingdom of God.
Galatians 5:19-21 KJV

Then Peter said unto them, Repent, and be baptized every one of you in the name of Jesus Christ for the remission of sins, and ye shall receive the gift of the Holy Ghost.
Acts 2:38 KJV

And the times of this ignorance God winked at; but now commandeth all men everywhere to repent:
Acts 17:30 KJV

Needless to say all the usual suspects were livid because of his remarks: atheists, homosexuals, those in the lamestream media, and so on. And his own in the sporting world turned on him as well. As one article reports:

Rugby Australia released a statement shortly after saying the post was ‘unacceptable’. “Rugby Australia is aware of a post made by Israel Folau on his Instagram account this afternoon,” Rugby Australia said in a statement. “The content within the post is unacceptable. It does not represent the values of the sport and is disrespectful to members of the Rugby community.

“The Rugby Australia Integrity Unit has been engaged on the matter tonight.” Sydney Morning Herald columnist Peter FitzSimons wrote that Folau’s latest post should see Rugby Australia cut their ties with the 73-test Wallaby. “Israel Folau has to go, and will go,” the former Australian test player wrote. “Quick. Clean. Gone. At least until such times as he repents.”

“Rugby Australia simply has no choice. They cannot go through one more time the agony of last year when Folau’s social media comments trumpeting that gays would go to hell, saw rugby lose sponsors, fans and support,” FitzSimons said in the Sydney Morning Herald.

According to rugby.com.au, there was a reported clause in Folau’s contract negotiations last year that was specific to his use of social media. The tweet has been widely shared and commented on, with most people responding having a negative view of his comments.
www.nzherald.co.nz/sport/news/article.cfm?c_id=4&objectid=12221212&fbclid=IwAR3Q-ryvFJSTXo7SIbD_1JiiXjNRVbwnlv4KMkO9gr5a6UA1dTrfOaTLEt8

So here we have the world turning on him – once again. He is not being a good boy. He refuses just to be a star athlete. When he just did sport, everyone loved him. But he also takes his faith seriously – much more seriously than his own career. And for that everyone hates him.

But as is usually the case, it is not just the God-haters who went ballistic at Folau. We also had plenty of trendy lefty Christians and members of the religious left strongly condemning him. ‘Oh but Jesus would never speak to people this way.’ ‘You need to be more loving and less intolerant and judgmental.’

Um, actually no one warned more about hell and judgment to come than Jesus Christ. And given that Folau did basically nothing but quote from Peter and Paul who were inspired by God to say and write what they did, these critics are simply out to lunch.

The truth is Folau may not always be as tactful or delicate as some of these craven Christians and men-pleasing believers want him to be, but he has courage and conviction. I will take that any day of the week over these milquetoast pansies who likely have never shared the gospel with anyone all their lives.

These armchair critics are a dime a dozen. They love to condemn bold and courageous Christians, while they grovel before the world, seeking to befriend it and get along with it. The Bible is quite clear about the sin of trying to please men while displeasing God. Consider just a few passages:

-Luke 6:26 Woe to you when all men speak well of you, for so did their father to the false prophets.

-John 12:42-43 Yet at the same time many even among the leaders believed in him. But because of the Pharisees they would not confess their faith for fear they would be put out of the synagogue; for they loved praise from men more than praise from God.

-Galatians 1:10. Do I seek to please men? For if I still pleased men, I would not be a servant of Christ.

Sure, we all want to be tactful and careful as we share biblical truth in public. But we also need some Holy Ghost boldness here. If you see a little girl playing on the street and a big truck hurtling her way, if you cared at all, you would yell, scream, jump up and down and do all you can to save her.

You would NOT try to be polite, respectful and calm, making sure no one gets offended. You would act quickly and sound the alarm because a life is at risk. Folau gets it: all people are sinners and they are all heading to a lost eternity unless they repent.

They must be warned. They must be told. Sure, it is always nice if this can be done over a period of time with a nice relationship established. But we do not always have that luxury. Some of the people who read Folau’s warnings today may well be dead tomorrow.

In the same way hoping to build a relationship with the little girl first would be madness. Whether she is a friend, relative, or a complete stranger, she NEEDS that warning or she will die. All unbelievers need such warnings too. Yet most Christians have never shared their faith even once.

They are far too cowardly and too spineless. They would rather keep people happy, even if it means watching them slide into a lost eternity. I may not always do things as Folau does them, but I will give him credit. He has more guts than most believers.

And he seems to care about the lost a whole lot more than most believers. If these spineless wonders want to sit on the sidelines and criticise him, well, I am not really interested in what they have to say. They remind me of the woman who went up to the great evangelist D. L. Moody and complained about the way he evangelised. As the story goes:

The woman said to him, “Mr. Moody, I don’t like the way you do evangelism!” “Well, ma’am, let me ask you, how do you do it?” Moody asked. She replied, “I don’t!” Moody responded, “Well, I like my way of doing it better than your way of not doing it!”

40 Replies to “Israel Folau, the Apostle Paul, and the Gospel”