It always happens: whenever a devout Christian does the biblical thing and calls out sin, pleads with sinners, and warns of judgment to come, plenty of other Christians will come out of the woodwork and attack them. These are usually armchair critics who never share their faith in public, but they sure take offence when real-deal Christians DO share their faith.

Sorry, but I will side with the true believers every day of the week. I want nothing to do with all the spineless wonders out there who do nothing for the Kingdom but are always ready to criticise those who do. They are cowards who prefer to keep everybody happy while allowing lost sinners to effortlessly drift right into hell.

Shame on these carnal Christians. It is time they became a little bit biblically literate. They need to learn about some basic biblical beliefs. And here are a few of these non-negotiable Christian truths: 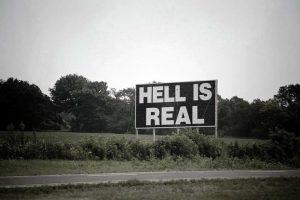 True love warns. A Christian who really loves people urgently wants to tell them the truth. He is not ashamed of the gospel, and he knows it is what every person on the planet desperately needs to hear. He will not remain silent as long as one sinner still needs to hear the truth.

But today’s churches – at least in the West –are filled with cowardly and compromised pew-warmers who actually do not believe any of this. They actually think it is wrong to warn the sinner about hell. They think we should just be ‘nice,’ and seek not to offend anybody.

They obviously have never read much of the New Testament. Everywhere Jesus and the disciples went, they offended people, they upset people, they enraged people, and they provoked people. That is because sinners naturally do NOT want to hear the gospel.

It is what they need to hear, but they hate it when people share it with them. And Jesus made all this perfectly clear in John 3:19-20: “This is the verdict: Light has come into the world, but people loved darkness instead of light because their deeds were evil. Everyone who does evil hates the light, and will not come into the light for fear that their deeds will be exposed.”

All this has erupted once again since a well-known athlete has again dared to share his faith in public. For saying that we are sinners heading to hell unless we repent, rugby star Israel Folau is being dumped on by nearly everyone. All hell has broken loose (no pun intended), and everyone is ready to string him up.

While we expect non-Christians to be outraged at what he said, it is a real worry when so many Christians also go into full-tilt attack mode. As I wrote in my previous article, plenty of these armchair critics have come out to criticise him: billmuehlenberg.com/2019/04/11/israel-folau-the-apostle-paul-and-the-gospel/

And I have already had to deal with a number of these Christian critics. As but one example, on one social media site where I posted my Israel Folau article, one gal was quick to complain:

How is condemning people to Hell loving them though? Jesus regularly spent time who the Pharisees considered to be sinners, he spent time prostitutes and very gently by love and acceptance of them as a person was able to show them that there is a better way. 1 Corinthians 5:12-13 says we have no business in judging outsiders. We need to love and accept them as Jesus did with those he spent time with. It’s only by showing the love and acceptance of Christ and lots of prayer that there may be a seed planted and people turning to Christ. They are a person created in God’s image, their sin does not define them.

I replied to her as follows:

The most loving thing we can do for sinners is to warn them about their lost condition and plead with them to repent and turn from their sin. Allowing them to slide into hell without warning means we really do not love them. And given that Jesus spoke more about hell and judgment to come than anyone else in the Bible, we all need to follow in his footsteps. He knows what is at stake for the lost, and so should we. Since some critics here appear not to have read the article in question, let me offer a small bit here:

“If you see a little girl playing on the street and a big truck hurtling her way, if you cared at all, you would yell, scream, jump up and down and do all you can to save her. You would NOT try to be polite, respectful and calm, making sure no one gets offended. You would act quickly and sound the alarm because a life is at risk. Folau gets it: all people are sinners and they are all heading to a lost eternity unless they repent. They must be warned. They must be told. Sure, it is always nice if this can be done over a period of time with a nice relationship established. But we do not always have that luxury. Some of the people who read Folau’s warnings today may well be dead tomorrow.”

And of course much more can be said here given that this gal manages to get most things rather mixed up. As to Jesus spending time with sinners – um, duh, guess what? Those were the only sorts of people he could spend time with! Everyone is a sinner, so only sinners received the attention of Jesus.

And what does it mean that he ‘spent time with them’? He did, but it was not to say that he approves of their sin, nor that he likes just to chill with them and have a good time. He instead spent time with them to warn them of judgment to come and urge them to get right with God. But I speak to this in greater detail here: billmuehlenberg.com/2017/05/12/thinking-biblically-sin-sinners/

As to 1 Corinthians 5, she really has mangled that one. That text has absolutely NOTHING to do with not warning sinners. If that were so, it would be impossible to share the gospel with anyone any longer. The gospel is the good news that Christ died for lost sinners, and if they repent and turn from sin, they can get right with God.

But if we cannot tell people they are sinners and warn them to flee from the wrath to come, then we have no gospel left to tell them. Good grief, this is not rocket science. And the context of that text is perfectly clear anyway: it has to do with barring an unrepentant and incestuous believer from Christian fellowship.

Excommunicating a non-Christian would make no sense of course, and that is what Paul was talking about there. See here for much more on this: billmuehlenberg.com/2015/03/24/difficult-bible-passages-1-corinthians-512-13/

Lastly, it is just foolish and unbiblical in the extreme to claim that “sin does not define them”. Of course it does. A sinner is defined by his sin and his rebellion against God. Sure, we are all made in the image of God, but that image is now tarnished because of sin. Until we repent and turn from our sin, that is the only world we will know of: we ARE sinners who sin.

That is why Christ came – to rescue sinners. As we find in Mark 2:17: “On hearing this, Jesus said to them, ‘It is not the healthy who need a doctor, but the sick. I have not come to call the righteous, but sinners’.” Hmm, he seems to be identifying sinners as, well, sinners!

We must once again put the fate of the lost back into our core gospel message. Without it we are not preaching the gospel. Without it we have nothing to offer lost sinners. Sure, we need to have a tear in our eye as we warn of the horrors of hell. But we must proclaim it nonetheless.

Let me finish with some thoughts by the great saints on this matter:

“If I never spoke of hell, I should think I had kept back something that was profitable, and should look on myself as an accomplice of the devil.” J. C. Ryle

“When sinners are careless and stupid, and sinking into hell unconcerned, it is time the church should bestir themselves. It is as much the duty of the church to awake, as it is for the firemen to awake when a fire breaks out in the night in a great city.” Charles Finney

“No preacher was ever so loving as Christ, but no man ever spoke so horribly about hell.” Charles Spurgeon

“If there is no Hell, a good many preachers are obtaining money under false pretences.” Billy Sunday

“There is rather less in the Gospels about peace than there is about punishment. Jesus does not see his love for the world as incompatible with sending people to hell; the revolutionary nature of Jesus’ teaching over against the First Testament is that the punishment he envisages for his enemies is much worse. There is a tough side to God and to Jesus as well as a merciful side.” John Goldingay

“There is no doctrine which I would more willingly remove from Christianity than this, if it lay in my power. But it has the full support of Scripture and, specially, of Our Lord’s own words; it has always been held by Christendom; and it has the support of reason.” C. S. Lewis