Well, that didn’t take long. For daring to share some Scripture passages on his own social media page, Australian rugby star Israel Folau has been given the boot – all in the name of tolerance and inclusion of course. As one report puts it: 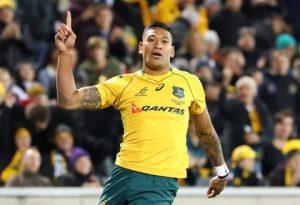 Israel Folau is set to be sacked following his social media posts on Wednesday night, leaving the Wallabies’ preparations ahead of September’s World Cup in chaos. A year after telling gay people that they were destined for hell on Instagram, the 30-year-old doubled down on his hateful, harmful rhetoric by sharing a meme that informed the masses that hell awaits “drunks, homosexuals, adulterers, liars, fornicators, thieves, atheists and idolaters” on the social media platform.
www.foxsports.com.au/rugby/wallabies/it-is-our-intention-to-terminate-his-contract-rugby-australia-to-sack-israel-folau/news-story/8dc44f656f18a9a69d8540362c75e89b?fbclid=IwAR0KVHiQwfHrEJazcPTVUAZCsD4l7ykMTKFBk4pylT5edGE5WClXDF5jJpI&nk=6f34e64bb32ba5e868f86c019617cddf-1554978934

Hmm, “hateful, harmful rhetoric”? Nothing like throwing in some editorialising with your reporting mate. But this is always how the tolerance crowd operates – drone on and on about it all the time, but refuse to practice it when it comes to Christians and conservatives.

Of course it is not hard to see why the persecution of Folau was so swift and severe: Qantas, headed by a homosexual, is a major sponsor of the Wallabies. They are not really into love and acceptance. Qantas boss Alan Joyce said a few years back that if you are not pro-homosexual you should not fly with Qantas: billmuehlenberg.com/2016/04/27/godless-corporations-rampant-discrimination-blackmailing-christians/

The attack on him has been relentless. As I keep saying, I expect pagans to hate on Christians. What grieves my spirit deeply is how many so-called Christians have been blasting him as well. As but one example of many, I had one gal say this on a social media post about him:

Bill Muehlenberg Homosexuality is not the only sin referred to in scripture – I would take his stand far more seriously if he highlighted other sins impacting professional sportsmen and women as well – e.g. cheating, rough and unnecessarily aggressive play, greed, and the most serious of all not placing God first in their lives. Further, these sins have far more serious consequences impacting the lives of others, than what goes on between two consenting adults in the privacy of their own bedrooms.

To which I replied:

Thanks, but you obviously did not even bother to read my article (nor the remarks of Folau). Had you actually done so instead of offering us your knee jerk reaction you would have seen that he did EXACTLY that!! He highlighted a whole bunch of sins! He mentioned an entire list of sins, not just homosexuality. Indeed, he simply quoted a list of sins from Scripture.

But what has bothered me far more than these clueless Christians are all the Christian “leaders” who have come out to attack him and rebuke him. This I find so very worrying. One online Christian magazine asked a bunch of these leaders what they would say to Folau.

Most of their replies were really rather appalling. Most accused Folau of being unloving and judgmental and ungracious and condemning and reckless – the very same things most non-Christians call Christians when they seek to share biblical truth.

One spoke of “Folau’s clodhopping use of the Bible — with verses ripped out of context and lists of ‘sinners’ bound for hell, without any sense of the broader story — distorts the core message of the text”. Umm, he simply quoted some Scriptures which speak to the situation at hand. And such people are NOT sinners? You mean Paul was wrong?

And all this despite what Folau has actually said – the stuff the lamestream media and clueless Christians do NOT want you to be aware of. He recently wrote some pieces seeking to explain his stance. Let me quote from some of it:

People’s lives are not for me to judge. Only God can do that. I have sinned many times in my life. I take responsibility for those sins and ask for forgiveness through repentance daily. I understand a lot of people won’t agree with some of the things I’m about to write. That’s absolutely fine. In life, you are allowed to agree to disagree. But I would like to explain to you what I believe in, how I arrived at these beliefs and why I will not compromise my faith in Jesus Christ, which is the cornerstone of every single thing in my life.

I hope this will provide some context to the discussion that started with my reply to a question asked of me on Instagram two weeks ago. I read the Bible every day. It gives me a sense of peace I have not been able to find in any other area of my life. It gives me direction. It answers my questions. I believe that it is a loving gesture to share passages from the Bible with others. I do it all the time when people ask me questions about my faith or things relating to their lives, whether that’s in-person or on my social media accounts….

I have tried to live my life in God’s footsteps ever since. I follow his teachings and read the Bible all the time in order to learn and become a better person. Since that happened I have been at peace and enjoyed life with an open, honest heart, which is why my faith in Jesus comes first. I would sooner lose everything – friends, family, possessions, my football career, the lot – and still stand with Jesus, than have all of those things and not stand beside Him….

Anyone who knows me knows I am not the type to upset people intentionally. Since my social media posts were publicised, it has been suggested that I am homophobic and bigoted and that I have a problem with gay people. This could not be further from the truth. I fronted the cover of the Star Observer magazine to show my support for the Bingham Cup, which is an international gay rugby competition for both men and women. I believe in inclusion. In my heart, I know I do not have any phobia towards anyone.
www.playersvoice.com.au/israel-folau-im-a-sinner-too/?fbclid=IwAR0dvHeZx-0TOh45Zqo_BPdCSX2Rm86i-yPcAybo6nTnSHdkMd6fBToWgHI

I for one support Israel and am praying for him. I will ignore the legion of armchair critics and keep seeking to encourage him. That does not mean I would do everything the way he has done it, as I wrote in my earlier piece: billmuehlenberg.com/2019/04/11/israel-folau-the-apostle-paul-and-the-gospel/

But I applaud his courage and his dedication to Christ. And yes, it IS a loving thing to do to warn the sinner about his fate and to urge him to run to Christ: billmuehlenberg.com/2019/04/11/yes-it-is-loving-to-tell-sinners-about-hell/

Sorry, but give me one courageous – albeit imperfect – Israel Folau instead of a thousand of his milquetoast critics any day of the week. God bless you Israel.

52 Replies to “Outspoken Christians Will Not Be Tolerated”