On Thursday all hell broke loose (no pun intended) when star rugby player Israel Folau said that hell is real and unrepentant sinners end up there. By simply quoting from Scripture all the usual suspects came out to attack him ferociously.

So on that day I penned three articles about the situation. The next three days I was interstate giving a number of talks, so my pen (or keyboard) fell silent. Those of you who might have wondered if I died or something can be relieved to know that I am still alive and now back on my computer. 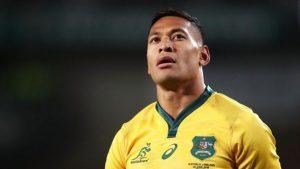 I had thought that those three articles on Folau were sufficient, but it looks like the fallout from all this continues to bubble along wildly with no sign of letting up. So it seems that another piece or two is required on this matter. But by way of background, let me offer the previous three pieces that I wrote on this:

While so many of our elites condemned Folau – as would be fully expected – a number of secular voices have rallied to his defence. People like Chris Kenny, Alan Jones, and Andrew Bolt for example came to his defence. They all know that this is a witch-hunt and just more erosion of free speech, even if they may not go along with Folau’s religious viewpoints.

As Morgan Begg of the secular conservative thinktank IPA said: “The outrage mob is out in force following rugby star Israel Folau’s latest social media comments. The mob wants to more than disagree with Folau’s opinion, as is our right in a free society. It wants to ban him from expressing it, which is totalitarian.”
ipa.org.au/publications-ipa/the-outrage-mob-is-out-to-get-folau?fbclid=IwAR2Stapz96CxwREPaVtmL2cvFGxMouw_l5nTW9EYIL-M7kJJ5iQEsfmYTUE

Broadcaster Alan Jones said this: “It has nothing to do with Israel, or rugby, or religion, homosexuals, or whatever. Where are we in this country on free speech? We’ve got an issue here because we’re going down a very, very narrow road here.”
www.smh.com.au/national/nsw/broadcaster-alan-jones-condemns-folau-sacking-20190412-p51dik.html

Or as Bolt wrote:

Who is doing the real dividing? Let’s ask Australian Rugby League Commission boss Peter Beattie, who insisted Folau’s comments failed rugby’s “inclusiveness culture”. What hypocrisy. Here’s rugby showing its “inclusiveness” by excluding a fundamentalist Christian. In fact, Folau’s actions suggest he’s more inclusive than his critics. Despite his personal views, he’s still happy to play with the many rugby players who are gays, drunks, adulterers, liars, fornicators, thieves, atheists or idolaters. What a pity rugby bosses can’t learn from his example and let a Christian play, too.
www.heraldsun.com.au/news/opinion/andrew-bolt/andrew-bolt-why-israel-folaus-critics-are-the-intolerant-ones/news-story/b1b241e5491b381ed921bbf65cb172ab

I am thankful that many non-religious types have seen the Folau situation for what it really is.

But exceedingly disappointing is the fact – as mentioned in my previous pieces – that a number of Christian leaders have been quite happy to come out publicly and attack Folau. They ran with all the usual nonsense about how ungracious he is and how judgmental he is, etc., etc.

I mentioned in at least two of my earlier articles that sure, I might have said things a bit differently or done things a bit differently. It is always so very easy to be an armchair critic. They are a dime a dozen. But please bear in mind that Folau is a 30-year-old jock. That American term for an athlete can imply great physical abilities, but not always great intellectual abilities. Indeed, most athletes are not known for their massive intellect, although there certainly are a number who are fit in both body and mind.

I know little about Folau, but he grew up in a Mormon home, and he later left that religion and embraced evangelical Christianity. I am not sure if he has had much theological training, but again, in his personal Instagram pages he basically just quoted from the Bible. To be honest, I wish other believers were so bold.

But so many Christian leaders were so very quick and proud in denouncing Folau. Strange how these guys always say we should be more loving and gracious and non-judgemental, yet they are so ready to show rather unloving and ungracious judgmentalism to fellow Christians in public.

For example, consider Hillsong’s Brian Houston who very early on tweeted this about Folau: “So sad about the (Israel Folau) situation. His way is not the right way. It does not reflect the grace of the Lord Jesus Christ. The New Testament is clear, but grace does not point fingers. It recognises our own sinfulness. ‘But by the grace of God’.”

Good grief! All Folau did was quote Scripture! How in the world is that not the right way!? How is quoting Paul being ungracious!? How is Folau NOT recognising his own sinfulness!? Indeed, why is Houston bearing false witness here? He should know full well that Folau HAS spoken quite clearly and openly about his own sinfulness.

I quoted him on this in my third article. Here is a small part of what Folau said that I quoted from: “People’s lives are not for me to judge. Only God can do that. I have sinned many times in my life. I take responsibility for those sins and ask for forgiveness through repentance daily.”

It seems Houston soon took down that unhelpful and patently foolish tweet. So I thought that was the end of it. But no, he could not resist: he went on to pen an entire article basically saying the same unhelpful and biblically spurious things. And he happily had the article published by the hostile secular press!

The title is worrying enough: “A message to Folau: The world doesn’t need more judgmental Christians.” He begins by giving lip-service to Folau’s courage, but then spends the rest of the piece publicly rebuking him. He says for example: “In 40 years of telling people about the good news of Jesus, I have seen that the ‘turn or burn’, approach to proclaiming the message of Christianity alienates people. Scaring people doesn’t draw them into the love of Jesus.”

Oh really? Um, there is no one else in all of the Bible who spoke more about hell and judgment to come for those who do not repent than Jesus Christ. So is Houston telling us that Jesus clearly got things wrong here? Should Jesus lift his game to keep some modern church leaders happy?

Let’s get real here, shall we? Did Jesus alienate people? Well, actually he did, all the time! And he alienated people NOT because he had the wrong methods that some critics think we must get rid of, but because he spoke truth – and he spoke it unflinchingly.

Sure he spoke the truth in love, but remember this reality: the most loving, gracious and caring man on earth was hated, rejected and killed because people were alienated by his message. His truth convicted people. His truth cut people to the heart. It divided people, offended people, and upset people.

But it seems that Jesus did it all wrong according to some of these critics. Hmm, I am reminded of the words of Leonard Ravenhill: “If Jesus had preached the same message that ministers preach today, He would never have been crucified.” Exactly!

Houston went on to say this: “The problem with harsh comments in the media and disparaging statements on social media is that they create a further wedge between God and people. The world doesn’t need more judgmental Christians.”

Wow. For the umpteenth time: Folau simply quoted Scripture! How is that being judgmental!? Why do I suspect that Houston and the other critics would have rebuked Jesus and Paul for being far too judgmental and unloving!? To tell sinners that they are doomed without Christ and headed to a lost eternity is now being un-Christian? Really?

It seems that the Apostle Paul needs to repent for failing to act and talk like these modern-day critics demand. Sorry, but I will stick with Jesus and Paul here instead of these “ooh, you can’t judge anyone” leaders. What every sinner desperately needs is to hear biblical truth. As I said in my second article, that MUST contain these core biblical elements:

But the very fact that the two most godless and radically leftist newspapers in the country (The Age and SMH) are happy to run with Houston’s piece is most telling indeed. That is often a dead giveaway that the one doing the writing might be as much married to the spirit of the age as to biblical truth.

Much more can be said about the Folau fallout. For example, other star athletes are now coming to his defence. As one article states:

Geelong champion Gary Ablett and Carlton midfielder Matt Kennedy have been embroiled in the Instagram scandal that is set to end Israel Folau’s rugby career. Ablett and Kennedy were two of nearly 39,000 people who liked Folau’s controversial homophobic post which said gay people are going to hell unless they repent. The Herald Sun reports that Ablett removed his like on Sunday, with the Cats unaware of his interaction with Folau’s post.
www.foxsports.com.au/afl/geelong-champion-gary-ablett-and-young-carlton-midfielder-matt-kennedy-embroiled-in-israel-folau-instagram-scandal/news-story/7086d5905b8f5fb74569cc7cb467f04d?fbclid=IwAR3Z96YU49lbpnq3EudBaHobNFTzYU_nLrHIHed4VEZ4zffMHel7f_1WBP8&nk=e13d522cac47da4abb914c173e956aba-1555299412

But to wrap this up: once again, yes we can always learn to be more tactful and more wise in how we communicate in public. But it seems that Folau has far more genuine Christian concern and love for the lost – even if expressed not as well as some might prefer – than many church leaders seem to have.

And I really am appalled at his legion of Christian critics. It seems that they are often the ones who are being the Pharisees here, not Folau.

74 Replies to “Folau and the Fallout”