When Jesus was involved in a heated exchange with the fake believers of his day, he called them out in no uncertain terms. While they were going on about having Abraham as their father, Jesus cut to the quick and said they actually had the devil as their father.

They certainly were not real children of God. If they were, they would have believed Jesus and done works worthy of repentance. But they did evil, because God was NOT their father. You can read all about this in John 8. But here I want to look at another group of fake believers.

Consider this: Christian liars. Christian thieves. Christian murderers. Christian fornicators. Christian rapists. Christian abortionists. These phrases are what are known as oxymorons. They cannot be true because the two elements cancel each other out. They are a contradiction in terms. 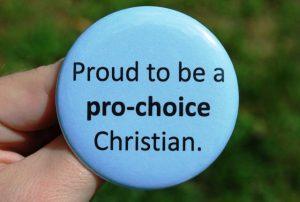 Let me focus on one such fake group: “Christian abortionists”. Yes, there actually are people who claim to be such things. If they are not doing the baby killing themselves, they are at least fully supporting it. And all the while they actually claim to be children of God. These are just the sort of people Jesus had to deal with.

In fact, the very verse I alluded to above nicely ties all this together. In John 8:44 we read this: “You belong to your father, the devil, and you want to carry out your father’s desires. He was a murderer from the beginning, not holding to the truth, for there is no truth in him.”

Let me make things real plain for you: abortionists are murderers. They are of their father the devil. They are NOT Christians and can never be, unless they repent and renounce this satanic work. Murdering babies and praising Jesus is simply a diabolical disconnect on steroids.

But as I say, unfortunately, there are such folks out there. There would be many examples of this. They are utterly nauseating, but they must be brought to light. Let me just offer a few of them here:

-A Planned Parenthood medical director says that being raised as a Christian convinced her that performing abortion is “the most important thing I will ever do.” Dr. Sarah Wallett, the medical director of at Planned Parenthood Greater Memphis Region, writes in an article posted on Refinery29 that she was “raised in a Christian home in Lexington,” South Carolina.
“My family went to church regularly, said prayers before meals, and I was taught from childhood that it was my duty to help people in need and leave the world a better place than I found it,” she writes. “The patients I see every day are so clearly people in need — and the medical care I provide them is both life-changing and, in many circumstances, life-saving. The compassion and empathy I learned from my Christian faith are fundamental to my work.”
www.lifesitenews.com/news/abortionist-my-christian-faith-convinced-me-this-is-the-most-important-thin?utm_content=buffere7c1a&utm_medium=social&utm_source=+lifesitenews%2Bfacebook&utm_campaign=buffer

-Local pro-life advocates in Chicago will protest tonight at an event featuring an abortion practitioner who calls himself a Christian abortionist. Pro-life advocates will gather at 5 p.m. today west of the Chicago Loop to oppose the claims of abortionist Willie Parker. The Pro-Life Action League will be advocating for the sanctity of life and sharing the grim reality of abortion with the public, outside of a fundraising party for a group that trains doctors and medical students to do abortions. Parker declares, “I believe that as an abortion provider, I am doing God’s work.”
www.lifenews.com/2017/09/14/abortionist-says-i-believe-that-as-an-abortion-provider-i-am-doing-the-lords-work/

-Amy Hagstrom Miller is the key abortion activist behind the U.S. Supreme Court case Whole Woman’s Health v. Hellerstedt, which challenges a life-saving Texas law. She told pro-abortion writer Valerie Tarico: “I was raised in a liberal Christian tradition, and I come to the work because of that background, not in spite of it. The Jesus that I was taught about would be holding the hands of women inside the clinic; he wouldn’t be screaming at them. Acting on Christian principles is holding the hands of people at difficult times in their lives, and being supportive and nonjudgmental and kind. That is very much what we bring to the work. I don’t know how to say it more clearly than that.”
www.lifenews.com/2016/03/03/abortion-clinic-owner-the-jesus-i-was-taught-would-hold-womens-hands-as-they-abort-their-baby/

-The Baptist minister [Susan Chorley] said her decision to have an abortion was “wrenching,” and it left her feeling “sad” with a sense of “loss.” Still, she justified her decision to abort her second child 12 years ago. She wrote: “I was serving in a congregation in New England at the time I realized I was pregnant. I was far away from family and friends. I had always imagined I would have a second child and I knew that it would be a struggle on our family financially as well as add to the stress of our marriage, which was starting to fall apart. I didn’t want to bring a baby into the world that would feel it was a burden—and I prayed to God to help me make the best decision I could in a situation that seemed impossible. Faith is so much more than judging right from wrong.”
www.lifenews.com/2016/10/13/baptist-minister-defends-aborting-her-baby-god-helped-me-make-the-best-decision/

-Self-proclaimed “Christian abortionist” Dr. Willie Parker blamed the attempted murder of newborn infant in a California McDonald’s restroom on the pro-life community. Parker posted on Facebook, “When women r shamed 4 sexuality & their ability to control their bodies is taken away, these r the tragedies we see.” Employees at a McDonald’s restaurant grew concerned when a cashier didn’t return from repeated trips to the restroom. Co-workers checking on the young woman, Sarah Lockner, found a “bloody mess on the floor surrounding the stall occupied by the woman.
www.lifesitenews.com/pulse/christian-abortionists-blames-pro-lifers-after-woman-tries-to-flush-newborn

-It’s the usual-usual from the organization originally named Catholics for a Free Choice. The front cover portion gives you the message. The headline reads, “Abortion in Good Faith” (the name for the campaign) with the subhead making the have-it-both-ways case: “It is because of my Catholic faith, not in spite of it, that I support women who make conscience-based decisions to have an abortion.” (Signed mother and grandmother.)
www.lifenews.com/2017/09/25/catholics-for-choice-launches-campaign-to-force-americans-to-fund-abortions/

-More than a dozen religious leaders from a variety of denominations gathered last week to support abortion and “bless” a Cleveland abortion facility. The “blessing” of the Preterm facility was initiated and coordinated by Rev. Laura Young, a Methodist priestess and the executive director of The Religious Coalition for Reproductive Choice’s (RCRC) Ohio chapter. “Bless this building,” prayed Rev. Tracey Lind, Dean of Cleveland’s Trinity Episcopal Cathedral, at the abortion facility. “May its walls stand strong against the onslaught of shame thrown at it. May it be a beacon of hope for those who need its services.”
www.lifesitenews.com/news/methodist-episcopalian-clergy-bless-cleveland-abortion-clinic-in-prayer-ser

On and on I could go with these examples. There seems to be no end to them. This is deception with a capital D. These folks dare to claim the name of Christ as they kill the most defenceless, innocent and vulnerable among us. They are just the sort of folks who thought they had God on their side as the ones Jesus had to deal with long ago.

As I said, these folks are not Christians. They are sons and daughters of the devil. Unless they renounce the works of Satan and repent big time, their fate will be the same as that of those Jesus denounced 2000 years ago.

13 Replies to ““Christian Abortionists”: They Are of Their Father, the Devil”