This is not my first article on the Church of England, nor is it likely to be the last. But I have to ask how many more I will write before the CoE has officially sailed off into the setting sun, never to be seen again. Each new month finds new horror stories about this once great ecclesiastical institution. 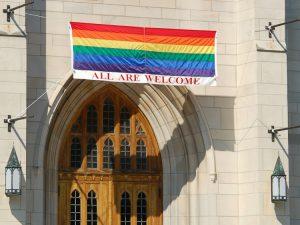 It has of course gone the way of so many other denominations over some of the hot potato issues of the day, such as homosexuality. And now that all things transgender is the flavour of the month, it seems the CoE must hop on board this bandwagon as well.

Back in July I wrote about the slow but sure implosion of the CoE, looking at how it was massively caving in to the gender bender agenda. You can see my writeup here: https://billmuehlenberg.com/2017/07/11/great-anglican-death-wish/

Things have not gotten any better over time. Things instead have continued to lurch downwards. Consider two recent newspaper articles coming out of the UK about the church. This article from September 21 was bad enough. It begins:

A boy wearing a dress to school is “not a problem”, the Archbishop of Canterbury has said. Speaking on LBC radio the most senior cleric in the Church of England said he would tell a concerned parishioner that they should help their child “understand”. He said: “I would say to them, I don’t think that’s a problem. The other family are making up their own minds. The other child is making up their own mind. Talk to your child. Help them to understand. Help them to see what’s going on and to be faithful to their own convictions.”
The Archbishop also said that he had been “struggling” with the question, and added: “I make a point of not commenting on particular cases because you just never know the whole story”.

What was that the Apostle Paul said? “If the trumpet does not sound a clear call, who will get ready for battle?” It seems equivocating, waffling, beating around the bush, and avoiding the question has become an artform for far too many church leaders.

Instead of taking a strong stand on the controversial issues of the day with a bit of black and white, it is all a matter of 99 shades of grey. Confused and troubled children like this do not need more spineless wonders offering bubble and froth, but a clear word. Such students need help, not a pat on the back.

But wait, there’s more. It gets even worse. Just today another article appeared on similar matters, and the good ol’ CoE continues to run with the spirit of the age. Check this out – it is really quite frightening!

Primary school boys should be allowed to wear tutus and high heels if they want to, the Church of England has said in its first guidance for teachers on transgender issues. Children should not be restricted by their gender when dressing up, and girls should be able to wear a tool belt and fireman’s helmet if they choose, the document says.
The guidance for teachers in Church of England schools, endorsed by the Archbishop of Canterbury, says that children “should be at liberty to explore the possibilities of who they might be without judgement or derision”. The document comes as a growing number of children coming forward to express doubt about their assigned gender.
Figures released earlier this year by the Gender Identity Development Service show that the number of under-18s referred to the north London clinic has grown from 314 in 2011 to 2,016 last year. The guidance says: “For example, a child may choose the tutu, princess’s tiara and heels and/or the fireman’s helmet, tool belt and superhero cloak without expectation or comment. Childhood has a sacred space for creative self imagining.”
The document, which gives teachers guidance on how to challenge transphobic bullying, also says young children “should be afforded freedom from the expectation of permanence. They are in a ‘trying on’ stage of life, and not yet adult and so no labels need to be fixed.”
Teachers in Church of England schools should “avoid labels and assumptions which deem children’s behaviour irregular, abnormal or problematic just because it does not conform to gender stereotypes or today’s play preferences,” it adds.
Introducing the document, entitled Valuing All God’s Children, the Archbishop of Canterbury Justin Welby said: “All bullying, including homophobic, biphobic and transphobic bullying causes profound damage, leading to higher levels of mental health disorders, self-harm, depression and suicide. Central to Christian theology is the truth that every single one of us is made in the image of God.”

Um, try telling us something we don’t already know Arch. Of course we all are. But what in the world does that have to do with allowing vulnerable and impressionable young people to be so very greatly harmed by the radical gender bender anarchy of the sexual militants?

Why not stand up and seek to protect them, instead of throwing them to the social engineering wolves? Have you no duty of care? And what did Jesus say about harming one of these young ones? Something about a millstone wrapped around the necks of the perpetrators?

Things have gotten so bad that an aide to Welby has just quit, lamenting the liberal drift of the church. As one recent news report states:

A close adviser to the Archbishop of Canterbury has quit over a ‘liberal’ Church of England ‘agenda of revisionism’ that fails to ‘articulate the Gospel message’. Lorna Ashworth, who opposes gay marriage, resigned saying the church’s ‘core message’ is ‘no longer believed’.
‘We have a liberal agenda because the church is not anchored in the Gospel,’ she said in The Sunday Times. ‘There is no more conversation about heaven, hell, sin, forgiveness, judgment.’ Though she claims her departure is about more than gay marriage, the resignation could boost the agenda of conservatives fighting accommodation with gay rights.
A motion to permit the blessing of same-sex marriages has been submitted to the General Synod ahead of its next meeting in February but it is yet to be adopted for debate.
Mrs Ashworth says the true message of Christianity risks being drowned out by people who don’t want to talk about sin, preferring instead to discuss social justice because ‘if we talk about sin, then we have to talk about bad behaviour and people don’t want to be judgmental’. She added: ‘When you try to say the simple Gospel in Synod you get booed down.’

But of course these are not the only areas in which the CoE has been struggling of late. It has plenty of problems, as do so many other major denominations today. Instead of holding strong to biblical absolutes and affirming 2000 years of Christian ethical and doctrinal teaching, many have simply caved in to the surrounding culture.

They have put up the white flag of surrender and have abandoned millions of their own flock to the hordes of wolves from without who are intent on having them for dinner. What a massive case of capitulation, compromise and carnality. Shame.

It seems the CoE has nearly given up the ghost. Sure, I realise there are still many valiant Anglicans in the UK seeking to stem the tide and fight the good fight. Various groups are seeking to remain true to biblical teachings, such as Anglican Mainstream. See their helpful site here: http://anglicanmainstream.org/

These brave troopers deserve all the support they can get. But whether it is enough to turn things around remains to be seen. The CoE may well be another major church body for which the Hebrew term Ichabod clearly applies. For those not in the know, consult 1 Samuel 4:21 and Ezekiel 10:18.

16 Replies to “Time to Bury the Church of England?”