The uniqueness of Jesus Christ is what sets Christianity apart from all other religions. His origins, his birth, his actions, his teachings, his death and resurrection, and his eternal status all set him apart from every other religious figure that ever lived.

Jesus is unique. Jesus is God, Jesus is saviour. Jesus is king. Moses is not. Buddha is not. Muhammad is not. There is only one true God, one true religion, and one true way to God. This is basic Christian teaching, and it has been so for 2000 years.

Let me spell this out in more detail: Unlike so many other religious leaders, Jesus made his own identity the focal point of his teaching. Who He was, not just what he said, was the essential thing. He didn’t say I am God’s messenger, or I can point the way to God. 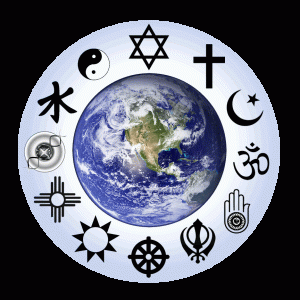 But plenty of wolves in sheep’s clothing are trying to deny all this, water all this down, and elevate false prophets and false religions to a place of theological equivalence with Christ and Christianity. And the interfaith movement is a primary place in which we see this occurring.

The idea that Christ is simply on a par with other religious leaders and that Christianity is not really superior to any other religion is a basic part of so much of the interfaith movement. In the interests of just getting along, truth claims are downplayed and superficial similarities are played up.

That is not how any Christian pastor or leader should operate. We need to stand for biblical truth at all costs. Seeking to live harmoniously with others in a very disharmonised world is commendable, but this should never come at the expense of biblical truth.

But we see the war on Christian truth occurring all the time sadly. I have often documented how the biblical faith gets slammed as clueless Christian leaders recklessly join in with interfaith endeavours. We had another doozy of an example of this happening just the other day. Consider this recent religious news item:

A Church of England church in London has come under fire for holding a joint birthday celebration for Jesus and Mohammed. The “Milad, Advent and Christmas Celebration” took place on Sunday at All Saints Church in Kingston upon Thames. In a promotional flier, the church said the service was “Marking the birthday of Prophet Mohammed and looking forward to the birthday of Jesus”. The hour-long service included time for Islamic prayer and was followed by the cutting of a birthday cake.

The church organised the event alongside the Kingston Inter Faith Forum and the South London Inter Faith Group. Earlier this year, a passage from the Koran denying that Jesus is the Son of God was read during a service at St Mary’s Episcopal Cathedral in Glasgow. The passage claims that Mary was “ashamed” after giving birth and that Jesus spoke to her from his crib. At the time, the Revd Dr Gavin Ashenden, then chaplain to the Queen, referred to the reading as “blasphemy”, saying: “There are other and considerably better ways to build ‘bridges of understanding’”.

Wow, what madness. Here we have the founder of a political ideology responsible for the death of more Christians than any other person in human history being celebrated right along with Jesus Christ. And this Kingston church wants to honour the guy!

As commentator Archbishop Cranmer put it: “Every time a church accords Mohammed the epithet ‘Prophet’, they are rejecting the crucifixion, denying the resurrection of Christ, and refuting that the Word was made flesh and dwelt among us, for Mohammed denied all of these foundational tenets of the Christian faith.”

Dear friends, do not believe every spirit, but test the spirits to see whether they are from God, because many false prophets have gone out into the world. This is how you can recognize the Spirit of God: Every spirit that acknowledges that Jesus Christ has come in the flesh is from God, but every spirit that does not acknowledge Jesus is not from God. This is the spirit of the antichrist, which you have heard is coming and even now is already in the world.

If one religion celebrates and affirms the fact that Jesus Christ is the Son of God, and another says such a concept is utterly blasphemous, then they are clearly not on the same page, and no Christian church should be celebrating the birth of Muhammad along with the birth of Jesus.

One might as well celebrate the birthdays of Churchill and Stalin in a combined service. While the differences between the English leader and the Communist murderer are massive, even those differences pale in significance when we compare (or rather, contrast) Jesus with Muhammad.

I have written on this often. In one piece I discussed the clear theological differences when it comes to Christ. In Christianity we have this:

Jesus Christ is the second person of the Trinity, God’s final and perfect word to man. He came not just as God’s messenger, but as God incarnate, as Saviour and Lord. He is eternal and without sin, (and, since the incarnation) fully God and fully man, two complete natures in one person. He died on the cross for man’s sin and rose again on the third day, ascending to heaven. As predicted in the Old Testament, He will one day come again as Israel’s Messiah to set up His kingdom on earth and to subdue His enemies. Jesus Christ is the culminating thought of the Old Testament and the chief subject of the New Testament. He is the King of kings and the Lord of lords to whom every knee will one day bow.

But in Islam we find this:

Isa, or Jesus, is revered as a Prophet but His divinity is vigorously denied. He was a mere man, only a messenger of Allah created by God. He was born of the virgin Mary, performed miracles, and yet disclaimed divine honours. Since it was unjust for the innocent and sinless Christ to die a criminal’s death, an “appearance” or a substitute was crucified on the cross, while Christ ascended to heaven where He now occupies an inferior station. One day He will return as one of Muhammad’s caliphs to help establish Islam as the world’s one true religion. On the side of the Dome of the Rock in Jerusalem it says in Arabic, “God has no son”. Contrast this with Matthew 3:17: “This is my Son, whom I love”.

And consider the differences when it comes to violence. As I wrote in an earlier piece, the two are complete opposites:

In sum, we find in the life, teachings and example of Muhammad nothing at all comparable to that of Jesus Christ. The two men could not be further apart in these areas. Claims that the two are both great religious leaders who share much in common are obviously quite wide of the mark.
On the one hand we have Jesus Christ who was the Prince of Peace who told us to love and forgive our enemies. On the other hand we have Muhammad who was a military leader who told us to kill and take revenge on our enemies. Muhammad preached “Death to the infidels!” while Jesus prayed “Father, forgive them, for they know not what they do”. The disciples of Muhammad killed for the faith while the disciples of Jesus were killed for their faith. The two could not be any more different.

That is why most of the interfaith initiatives should be avoided like the plague. They simply play down such differences because just getting along is seen as being more important. But Christian leaders must never be ashamed of biblical truth, and they must never shy away from affirming the uniqueness of Jesus Christ.

15 Replies to “Compromised Churches Denying the Uniqueness of Christ”