The cornerstone of Christian belief is the deity of Jesus Christ. If he is not fully God and fully man, he cannot save us. Nor would he be an object of worship, or seen as equal to God the Father. But all these things are clearly affirmed in the New Testament and at least hinted at in the Old.

So it is imperative that we get it right when it comes to thinking about who Jesus is and what he did. The case for his deity is one I have made elsewhere, so those articles need to be consulted along with this one. Here I wish to look at just two common objections, based on two passages of Scripture, both found in John’s gospel. 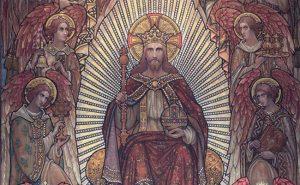 Those in the Christian cults and those affirming Christological heresies will regularly appeal to these two texts, but will ignore the mass of data which gives another view. If these two verses were all we had on Christ, then maybe it could be argued that he was not God in the flesh.

But all the biblical data must be examined, and we must compare Scripture with Scripture. As is well known, of all the four gospels, John is the one filled with texts stressing the divine nature of Jesus. What he said about himself, what he did, and what others said about him all point to a divine figure.

So these two problem passages must be read in light of the entire gospel, as well as the entire New Testament. Let me therefore examine each of these two verses in some detail.

The first passage used to try to prove Jesus is not God says this: “Very truly I tell you, the Son can do nothing by himself.” Those using this verse claim Jesus is not equal to God. But as always, context is king, and John 5 turns out to be quite a highly Christological chapter, one which clearly holds up the divine status of Jesus.

Indeed, the immediate context of 5:16-30 needs to be read here to help us understand what Jesus was saying. And the slightly larger context – including the story of the healing of the man at the pool at Bethesda at the beginning of the chapter – makes it clear just how wrong the cultic interpretation is.

The whole chapter involves Jesus defending himself and what he has done, and the two verses prior to v. 19 make it clear that this is all about the divine nature of Jesus. Verse 17 says this: “My Father is always at his work to this very day, and I too am working.”

Much can be said about all of this, but since I just reread a helpful little volume which deals with this by D. A. Carson (Jesus the Son of God – Crossway, 2012), let me rely just on him. He says this about the importance of verse 17:

This utterance establishes at least three things. First, by referring to God as “my Father,” Jesus is implicitly saying that he himself is God’s Son. Second, because in the context Jesus is arguing that he has the right to do things on the Sabbath that other human beings do not have the right to do, he is declaring his sonship to be unique. Third, because the warrant for Jesus’ work on the Sabbath is grounded in the fact that God, his Father, works on the Sabbath, Jesus is implicitly claiming he has the prerogatives of God. Small wonder that we read, “For this reason they tried all the more to kill him; not only was he breaking the Sabbath, but he was even calling God his own Father, making himself equal with God” (5:18).

Here, then, is Jesus’ explanation to the Jewish leaders of his peculiar sonship. He does not back away one millimeter from his claim that he has all the prerogatives of God, that he does all that his Father does, that he is to be revered as his Father is revered. And yet he makes his claim with arguments that carefully avoid giving any impression that he is a separate God-center, a second but equal God. Although his language is largely functional, it is simply impossible to overlook the ontology that is presupposed behind it.

The second passage appealed to by the critics of orthodox Christianity says this: “the Father is greater than I”. Again, context is crucial. Jesus is talking about returning to the Father where he will again enjoy the full glory he always had with Him.

But in his incarnational state he does not have that full glory on display. It is veiled. But he rejoices that he is now returning to the Father, and he wants his disciples to rejoice as well. As Carson says in his commentary on John:

If Jesus’ disciples truly loved him, they would be glad that he is returning to his Father, for he is returning to the sphere where he belongs, to the glory he had with the Father before the world began (17:5), to the place where the Father is undiminished in glory, unquestionably greater than the Son in his incarnate state.

Again, we see the relationship between Father and Son, and in this case, it is a very unique relationship. As Rodney Whitacre comments, “The Father is greater in that he is the origin (eternally) of the Son, but he and the Son are equal in that they share the same nature.”

There is a subordination to the Father, which is part of his eternal sonship. Thus the other clear pronouncements of deity in John’s gospel must always be kept in view here, such as John 10:30: “I and my Father are one.” As Craig Keener says,

In the whole of his Gospel, John plainly affirms Jesus’ deity (1:1; 8:58; 20:28) but distinguishes Jesus from the Father (1:1b, 2)… The issue is not Jesus’ nondeity, or even his distinction from the Father (which is assumed), but his subordination to the Father, which portrays Jesus as the Father’s obedient agent and therefore appeals to those who honor the Father to honor him.

So these two passages, long appealed to by early heretics and more recent cultists, do not make the case they seek to make with them. Admittedly, they can be difficult to fully comprehend correctly, and as mentioned, if this were all we had on Jesus, it might well seem to make the case for his lack of deity.

But we have the entire New Testament to look at, which throughout makes a clear and strong case for the eternally divine Son. In sum, we insist upon the full deity of Christ. As Wayne Grudem reminds us, we must insist on this

not only because it is clearly taught in Scripture, but also because (1) only someone who is infinite God could bear the full penalty for all the sins of all those who would believe in him—any finite creature would have been incapable of bearing that penalty; (2) salvation is from the Lord (Jonah 2:9 NASB), and the whole message of Scripture is designed to show that no human being, no creature, could ever save man—only God himself could; and (3) only someone who was truly and fully God could be the one mediator between God and man (1 Tim. 2:5), both to bring us back to God and also to reveal God most fully to us (John 14:9).
Thus, if Jesus is not fully God, we have no salvation and ultimately no Christianity. It is no accident that throughout history those groups that have given up belief in the full deity of Christ have not remained long within the Christian faith but have soon drifted toward the kind of religion represented by Unitarianism in the United States and elsewhere. “No one who denies the Son has the Father” (1 John 2:23). “Any one who goes ahead and does not abide in the doctrine of Christ does not have God; he who abides in the doctrine has both the Father and the Son” (2 John 9).

5 Replies to “Answering Objections to the Divinity of Christ”