Most Christians would know that the short New Testament book of Philemon has something to do with slavery and Christianity. In just 25 verses we read about Paul’s concern for the slave Onesimus, and his owner Philemon who lives in Colossae. 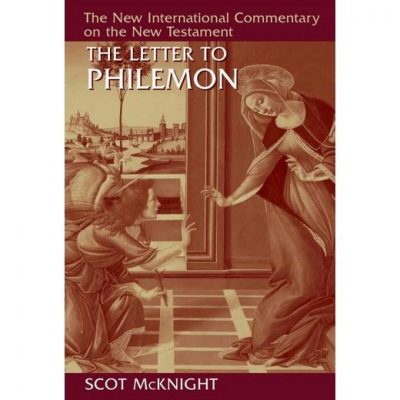 Usually the epistle to Philemon is paired with the letter to Colossians, because they appear to be closely related: both were written by Paul when he was in prison (likely Rome); both were probably penned in the early 60s; there are similarities in style; and there are a number of the same individuals mentioned in both letters.

There are far fewer standalone commentaries on this short letter, with most also covering the larger epistle. Thus we find David Garland (NIVAC), Peter O’Brien (WBC), James Dunn, (NIGTC), Douglas Moo (PCNT), David Pao (ZECNT), and N. T. Wright (TNTC) as just a few examples of those who cover both epistles in a single commentary.

This new one by McKnight in the New International Commentary on the New Testament series (NICNT) is 120 pages in length, which may seem like a lot for such a short epistle. But of course bear in mind that Marcus Barth and Helmut Blanke’s 2000 ECC commentary on Philemon is 560 pages!

The first 45 pages deal with preliminary matters, with the final 80 dealing with commentary proper. The introductory pages deal extensively with discussions of slavery, including a definition of slavery, how it worked in the Roman empire, the status of slaves, master and slave relationships, manumission, Christians and slavery, modern slavery, and related topics.

His discussion covers all the bases quite well. Those wanting more will find plenty of references for further reading offered throughout the introduction. One can also compare the 100 pages devoted to a discussion of slavery in Barth and Blanke’s commentary.

McKnight points out how progressives are often not happy with this letter since it does not demand manumission – in fact Paul does not say a word about it. But he notes how conservatives can sometimes err in the other direction, seeking to argue that slavery was not so bad back then.

He is concerned with both positions, arguing it is not a pro-slavery epistle, but neither does it minimise the moral seriousness regarding slavery. He reminds us that Paul’s main principle on the matter is of course found in Galatians 3:28: “There is neither Jew nor Gentile, neither slave nor free, nor is there male and female, for you are all one in Christ Jesus.”

McKnight says that “Philemon was written to persuade a slave owner to create new conditions for a slave”. He argues, contrary to some other commentators, that Paul was not being cowardly or compromising or indirect. Paul was actually quite forthright and direct in what he wanted to say in the letter. His aim, says McKnight,

In his actual commentary on the text he of course elaborates upon all this, and offers quite helpful detailed discussion along the way. All up, this is a very useful and important commentary indeed, and it is a welcome addition to the growing number of helpful commentaries on this letter.

It of course is not as long and detailed as the mammoth effort by Barth and Blanke. But it is a bit longer than many of the commentaries paired with Colossians. For example, Pao, O’Brien and Moo all come close with around 80 to 90 pages devoted to Philemon. But it is great to see the epistle taken seriously enough by NICNT to be presented as a standalone volume.

A word on NICNT

The NICNT series, which first began in the late 1940s, is one of the premier conservative/evangelical commentary series. A number of replacement volumes are now coming forth, of which this is one. Originally F. F. Bruce did Colossians along with E. K. Simpson on Ephesians in one volume which appeared in 1957.

In 1984 Bruce did a new revised NICNT volume covering both epistles along with Philemon. The NICNT series now stands at 19 volumes, with a number of the earlier commentaries either revised or replaced altogether.

While it is best to get commentaries based on the particular biblical book, and on the particular author writing it, if one wanted one entire series on the New Testament, this would be the one to get. Totalling over 11,000 pages, and costing just over $1000 US dollars, it is a good buy!

Available in Australia from Koorong: https://www.koorong.com/search/product/the-letter-to-philemon-new-international-commentary-on/9780802873828.jhtml

One Reply to “A Review of The Letter to Philemon by Scot McKnight.”