They must be putting something in the drinking water in the West. Whatever it is, it has worked a treat. In the period of just a few short years we have gotten to the place where a person can flat out deny reality, deny biology, and deny DNA, and still be taken seriously.

Consider this: I identify as a purple, three-legged, female, lesbian, humpback whale. And I fully expect you to take me dead seriously. If you don’t you are an intolerant sexist, racist, ageist, speciesist bigot. It is that simple: my preferences trump reality. 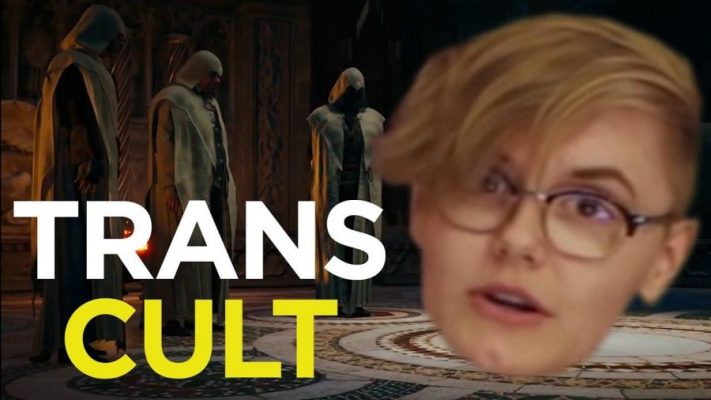 That is just what we find with the trans madness sweeping the West. It is completely shocking to behold. Just recently when folks were clearly delusional and psychotic, they were locked up for their own good – and the good of society. Today we celebrate them, promote them, endorse them and deify them.

They are our new heroes and everyone should bow at their feet and take them seriously and sing their praises. Anyone who refuses to do so is in big trouble. This is mass insanity. I do not want to be part of any of this. But the trouble is, it is being crammed down my throat and everyone else’s whether we like it or not.

Consider the latest case of this. The headline of the article was frightening enough: “Why we need more Australian trans stories on our TV screens.” The author of the piece actually thinks we need to promote this madness even further, and claims we are not doing enough to push the trans agenda on television.

And where did this piece appear? Oh, on “our” ABC of course. Why am I not surprised? As if they have not been pushing enough radical minority group agendas, and we need more. Good grief, stop the world and let me off. Or at least let my hard-earned tax dollars no longer subsidise these militants.

As if we need more trans sanity being force-fed on all of us. One might as well insist on some of these other crucial options:

And why not? Why don’t they rate? Why just people with a sad mental illness who need help, not martyrdom status or fake victimhood recognition? But leave it to the radical leftists at the ABC to insist we must have More, More, More of this lunacy.

The gal finishes her piece with these words: “Here’s hoping it is the start of something more, and that 2018 brings more diversity to Australian screens.” Really? We don’t have enough diversity already, especially on the ABC? I must have missed something here.

There is far too much diversity, except for one obvious group. When is the last time you saw a white, male Christian featured on the ABC and elsewhere, at least in a positive light? There would be plenty featured in a very negative light of course.

I’ve got a better idea

Sorry folks but I have a far better idea. Why not feature television shows telling us the truth about the trans madness? Why not have those who work with, and warn about the dangers of, the trans hysteria? Why not feature shows with ex-trans folks who have been there and done that? Best yet, why not just show normality for a change?

It is time for the ABC and other media outlets to be reporting on the cases of sex change regret. And there are plenty of them out there. As one recent article states:

In an interview with The Telegraph, world-renowned genital reconstructive surgeon Miroslav Djordjevic said his clinics are experiencing an increase in “reversal” surgeries for those who want their genitalia back. These people express crippling levels of depression and, in some instances, suicidal thoughts.
In male-to-female reassignment surgery, doctors such as Djordjevic transform the man’s genitals into the shape of a vagina, removing the testicles and inverting the penis. In female-to-male reassignment surgery, doctors remove the woman’s breasts, uterus, and ovaries, and extend the urethra so that the woman-turned-man can urinate from the standing position.

And why not share stories of transgender folks who are sounding the alarm? Consider just one such story – even the headline would be nice to see in our lamestream media: “I’m transgender. Please don’t normalise transgenderism”. The story begins:

We don’t normalise having cancer and we don’t normalise medical conditions, yet society is normalising transgenderism, which trivialises my grief and pain….
Fast forward to 2017, the normalisation of transgenderism in Western society has been a swing too far to the left. In the early years of my transition, I felt justified in believing this would be good for society. It was an immature Roz Ward-style response to the perceived injustice I experienced as a teenager. But I’ve come to realise that I was wrong – as a trans woman I should’ve known better about the dangers of normalising transgenderism in society.
Transgender people should be vetted thoroughly before receiving medical treatment, and should be rare. Once upon a time it was rare, and generally stigmatised by society. While I’m grateful that the stigma has significantly diminished in recent years, I am disturbed by the social normalisation and demedicalisation of transgenderism. Despite receiving the best ongoing medical treatment for gender dysphoria I could ever ask for, my dysphoria still causes me grief and pain. But that’s my grief and pain to carry. And it’s the responsibility of adults to deal with the struggles of life.

My message to the adults who support Safe Schools: just because we may have had it hard growing up and beyond, it doesn’t make it right to pass the pain and grief onto our children. Our children are impressionable. They’re vulnerable. Why would we want them to go through with it early in life when none of that’s necessary? Let kids be kids, and as adults, we have a moral responsibility to ensure that.

Finally, why not run with sound medical advice like the following:

“Congratulations, it’s a boy!” Or, “Congratulations, it’s a girl!” As a pediatrician for nearly 20 years, that’s how many of my patient relationships began. Our bodies declare our sex.
Biological sex is not assigned. Sex is determined at conception by our DNA and is stamped into every cell of our bodies. Human sexuality is binary. You either have a normal Y chromosome, and develop into a male, or you don’t, and you will develop into a female. There are at least 6,500 genetic differences between men and women. Hormones and surgery cannot change this.
An identity is not biological, it is psychological. It has to do with thinking and feeling. Thoughts and feelings are not biologically hardwired. Our thinking and feeling may be factually right or factually wrong.
If I walk into my doctor’s office today and say, “Hi, I’m Margaret Thatcher,” my physician will say I am delusional and give me an anti-psychotic. Yet, if instead, I walked in and said, “I’m a man,” he would say, “Congratulations, you’re transgender.”
If I were to say, “Doc, I am suicidal because I’m an amputee trapped in a normal body, please cut off my leg,” I will be diagnosed with body identity integrity disorder. But if I walk into that doctor’s office and say, “I am a man, sign me up for a double mastectomy,” my physician will. See, if you want to cut off a leg or an arm you’re mentally ill, but if you want to cut off healthy breasts or a penis, you’re transgender.
No one is born transgender. If gender identity were hardwired in the brain before birth, identical twins would have the same gender identity 100 percent of the time. But they don’t.

Wouldn’t it be nice to hear such home truths on our media outlets? But I won’t hold my breath. The ABC and the leftist MSM do not like alternative narratives to interrupt their social activism. They have only one PC line to run with, and will not give countering points of view a fair hearing.

And we all suffer as a result.

14 Replies to “Time to Derail the Trans Lunacy Train”