Another day, another terror attack, this time yet again on the busy streets of Melbourne. So far at least 14 people have been taken to hospital for treatment after a speeding SUV ploughed down crowds of pedestrians in one of the busiest intersections in the city.

Here we go again. Sounds vaguely familiar. In fact, way too familiar. It can become a bit ho-hum after a while. I fear some watching the event unfold on television will be saying things like, ‘Honey, change the channel. I want to see what the Kardashians are up to.’ 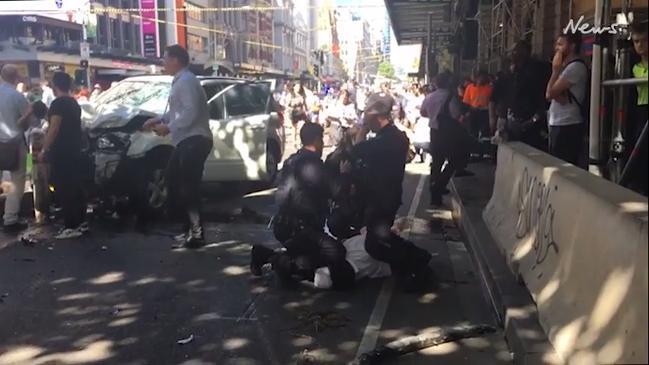 We have gotten so inundated with these regular acts of terrorism, both here and overseas, that we are in danger of taking them for granted. It just becomes so routine that we want to switch off. That is what happens when the West refuses to take seriously a threat such as Islam’s declared war on us.

While it is still early days, and we do not know for sure if this was another act of Islamic jihad, we do know a few things. The terror attack took place on Flinders Street between Elizabeth and Swanston streets, in the very heart of Melbourne. A pre-school aged child was among those injured, and is in critical condition.

The white SUV hit a concrete bollard and that put an end to their evil plot, otherwise many more may have been injured or killed. After the crash, two men were dragged from the terror vehicle and arrested by police. And now we know very little else.

It was again interesting to see how the MSM covered all this. Depending on which part of the media you watched, you would have gotten rather differing takes on all this. Leave it to the ABC for example, which I had on for at least half an hour. As they were interviewing eye witnesses about the car attack they did not ask one question of them on the identity of the driver, the looks of the driver, the possible ethnic background of the driver.

That would have been crucial information that everyone would want to know about. But it seems the ABC didn’t want to spill any politically incorrect beans here. After tiring on this lack of proper reporting, I flicked the channels. The very first thing I saw on Ch. 7 news and then Sky News was a picture of a handcuffed man sitting on the foot path.

He was quite clearly of middle eastern appearance with a long black beard! Indeed, both men were dark skinned with black beards. Hmm. Some inconvenient truths here? Why the potential cover up here? And why do the authorities seem to bend over backwards in playing down what we all seem to know?

Indeed, one wonders how long they may remain tight-lipped. It sure is hoped that we will not have a similar scene as the recent Las Vegas massacre. We are still in the dark on that one. We have been told next to nothing about what happened there, why it happened, etc.

It is as if the authorities have something to hide, and we will have to keep on being victims in the meantime. While so many in authority and so much of our media pretends to know nothing, in fact we do know some basic home truths here. For example, we do know this for certain:

Yet we have the police saying, ‘yes, it was a deliberate act, but we do not know what the motivation might be’. Really? Why is it that everyone plus their uncle seems to know full well what the motivation was and who was likely responsible, but our media and authorities remain tight lipped?

Yes they need to do their job, and further investigation needs to occur, but it seems all this is part of a much bigger and badder problem in the West: a culture of denial. Whatever these attacks are about, they just CANNOT be about Islam.

No, it was a lone wolf (or two in this case). He obviously had mental issues. Western culture likely drove him to do this. We must not rush to judgment. We must not accuse Islam of being violent. We must assure everyone that Islam is a religion of peace. Yada, yada.

And we get the same old same old from our political leaders each time this happens: “Our thoughts and prayers are with the victims” etc. Um, many of these leaders have likely prayed very little in their lives, and many would worship only one god – themselves.

Instead of getting serious about terrorism – which is overwhelmingly Islamic terrorism – they keep on mouthing platitudes. And they keep on defending those who have sworn to kill us. Until they get serious about modern terrorism, and the major terrorist political ideology in the world, we will keep having these attacks.

We will keep getting these massacres. We will keep seeing men, women and children being mown down in our streets. We will keep witnessing such bloody attacks. And many of them could have been avoidable. If we took seriously the threats of militant Islam, and acted accordingly, we might have a number of these people still with us.

We dare not take all this for granted, or get used to it. But I fear that is what may well happen. This just becomes the new normal. This is just something we have to get used to, as Western leaders have insisted. All this is a recipe for disaster. I don’t want to live in a world like that.

But until our politicians and leaders especially pull their heads out of the sand and get serious about the war that has been declared against us, we will keep seeing more blood on the streets. Yes, we must pray for all impacted. But we need some political courage and realism here, or we will just see things get worse.

I will never get used to this.

The police have just held a press conference. So the guy who deliberately sped down a busy sidewalk crushing innocent men, women and children is not a terrorist. The 32-year-old male of Afghan descent simply has – surprise, surprise – mental health issues.

Why of course! It has nothing whatsoever to do with a political ideology that begins with ‘I’ and ends with ‘slam’. Interesting how THAT is the common thread to all these attacks. I should have known! Isn’t it something how it seems that every time some Middle Eastern guy commits an act of carnage like this, he simply has mental health issues.

I guess that is the narrative they want us to run with. ‘Move along, nothing of interest here…’

BTW: I wonder how many genuinely mentally ill people had deliberately ploughed down innocent people on footpaths with cars and trucks before IS said this would be a terrific way to slaughter the infidels. Maybe the MSM or police can answer that question for us.

19 Replies to “Terrorism in Melbourne, Once Again”