As I said at the end of my article yesterday about the latest terror attack in Melbourne, it is interesting how it always seems to boil down to one common factor: no, not Islam, but mental illness! This is the new catch-all cause for all terror attacks it seems.

It does not matter in the least if the guy who did the slaughter was a Muslim from a Muslim country talking about Islam, it of course has NOTHING to do with Islam – it must just be a mental illness. That is the new mantra we all must now run with in the West. 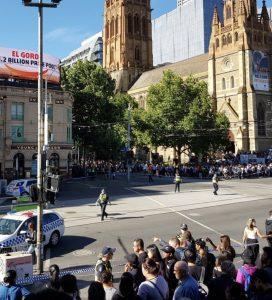 Islam is never the fault – mental problems explain everything. So today with more info available on the attacker, we read this: “The suspect has some mental health issues, a range of matters in his past, including drug use. He has made utterances, speaking of voices and dreams, attributing his actions to the treatment of Muslims around the world.”

Um, so here the Muslim even admits that this is all about Islam, but we still must not believe him. Whenever a Muslim acting according to his Islamic beliefs does something fully in line with the tenets of his faith – and even says so – he is NOT to be believed.

No matter how much he states that he does this because of concern for Islam or out of Islamic ideology, that CANNOT be the real reason why he did it. Islam is just not capable of generating Islamic terrorism and Islamic terrorists, so we must find another reason for all this.

So mental illness will have to do the trick. And just imagine if a devout Christian had done this, claiming it was for “the treatment of Christians around the world.” Would everyone still be talking about mental health and no connection to terrorism? Um, I don’t think so.

Thankfully I am not alone in being very concerned about all this. Others are also asking some hard questions here. For example, columnist Andrew Bolt, who gets it right on most things – while most political and religious leaders do not – said this:

All the bollards put up after six people were killed in Bourke St Mall in January have not stopped this. You cannot put up bollards at pedestrian crossings, a blindingly obvious point I made six months ago when the State Government was putting up what I called these stones of stupidity – bollards meant to falsely reassure us our politicians would protect us.
But our reckless immigration and refugee policies may well have played a role here, though, although we do not yet know the identity of the people in the car. Add this to the Sudanese riots and we have a very, very serious topic that needs debating.
UPDATE:
Sure enough, the 32-year-old driver was an Australian citizen of Afghan descent, yet police say only that he has a history of drug use and mental illness and there is no known terrorism link.
(Does having a mental illness exclude the possibility of also wanting to kill for your faith?)

And Mark Steyn has just written a ripper of a piece on the latest Melbourne jihad attack. He is worth quoting at length. He begins:

So there will be more empty seats round the Christmas table this year, after an “Australian citizen” mowed down pedestrians at the junction of Flinders Street and Elizabeth Street in Melbourne. The casualties include “a pre-schooler with serious head injuries”. The “Australian citizen” (I presume this designation is being used to emphasize that he’s entirely eligible to serve in Mr Turnbull’s cabinet) did it deliberately, but relax, lighten up, there’s no need to worry because, according to Victoria’s police commissioner, all this terrifying terror is “not terror-related”.
So he’s not a crack operative with the Islamic State’s Australian branch office, he’s just, as The Age’s cheery headline writer puts it, “of Afghan descent and mentally ill”. A second man, arrested while filming the scene and found to have three knives in his bag, is believed to be nothing to do with the first man. Just another Australian citizen taking his knife collection out for a stroll.

He reminds us that the last Melbourne terror attack spurred the government to take the bollard steps. A lot of good they have done. As he rightly reminds us in his title, “We Are the Bollards”. He continues:

One of the problems with bollarding off pedestrians behind a wall of Diversity Bollards is that they still occasionally have to emerge from behind the bollards to cross the street, and it’s hard to bollard off a pedestrian crossing. In this case, the non-terror-related Australian citizen simply waited until the little green sign indicated it was safe for pedestrians to cross the street and then floored it. In an amusing touch, his car eventually came to a rest against a bollard.
What’s the solution? Maybe automobile manufacturers could replace airbags with Diversity Bollards timed to inflate whenever non-terror-related drivers with mental-health issues accelerate near pedestrian crossings. Or perhaps it would be easier to issue citizens of western nations at birth with an individual ring of bollards to wear about their persons at all time, starting with when they leave the maternity ward.
Alternatively, instead of attempting to ring-fence every potential target – ie, everything and everyone – with Diversity Bollards, we could try installing bollards where they matter – around the civilized world. To reiterate what I reiterated last time:
I don’t want to get used to it – and I reiterate my minimum demand of western politicians that I last made after the London Bridge attacks: How many more corpses need to pile up on our streets before you guys decide to stop importing more of it?
If your congressman or senator says that’s not on his agenda, what he means is he’s willing to sacrifice you and your loved ones in the suicide lottery of diversity.

He closes by pointing out the irony of it all. Please click on the photo that I have accompanying this article, and notice what is in the top right corner of the picture. Says Steyn:

That’s the scene in Melbourne. At street level, the area is cordoned off. Thousands of law-abiding citizens are disrupted in their daily business by an Australian citizen “of Afghan descent and mentally ill”. At the far corner, that’s St Paul’s Cathedral. Can you see the banner they’re displaying three days before Christmas? Anything about Jesus? Christianity? No. Instead:
WELCOME REFUGEES
In that post-Christian void – the shell of a church with faith in everything but itself – a very merry Muslim Christmas makes a perverted kind of sense.

Yep, that about says it all. The West is committing hari kari as it jettisons and demonises its own past, welcomes in zillions of people who do not share – and even detest – our way of life and its Christian foundation, and have declared war on us.

Yet our leaders insist that we take in more such folks, no questions asked. Oh, and if they do go on a killing rampage, we know it must be due to mental illness. It certainly has absolutely nothing to do with a political ideology which has slaughtered hundreds of millions of people over its 1400 year history.

That is now the new normal in the West. Our craven and compromised leaders can no longer deny that Muslims are those doing almost all of the terrorism on our streets. So their new spin on things is that they are all mentally ill. Yep, that makes it all OK then. We can go back to sleep now.

As I wrote late last night in my first piece on this horrific incident of Islamic Christmas cheer:

I wonder how many genuinely mentally ill people have deliberately ploughed down innocent people on footpaths with cars and trucks before IS said this would be a terrific way to slaughter the infidels. Maybe the MSM or police can answer that question for us.

Somehow I don’t expect they will.