The formula is now down pat and fully predictable: another terror attack; usually by an Islamic refugee; Western leaders strenuously deny it is terror- or Islam-related; ‘It was a lone wolf attack by someone with mental problems’; soon enough the blood is cleaned from our streets; we await the next instalment.

Over and over it goes – the same old same old. Our spineless leaders, a complicit lamestream media, and some utterly clueless Christian leaders all follow the piper in regurgitating the same script: ‘This has nothing to do with Islam; Islam is a religion of peace; and what really must be dealt with is “Islamophobia”.’ 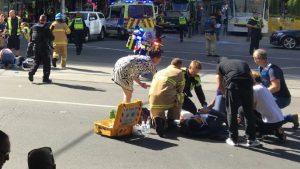 After hearing this tired routine countless times now, many Westerners are unsurprisingly getting a bit upset with all this. So where will it all lead to? While I am not a big fan of conspiracy theories, I do try to be a student of history, and what I see unfolding right now has me really worried.

What happens when ever larger portions of the population suspect that their leaders (politicians, police chiefs, media outlets, etc) are actually lying to them about crucial things like national security? What will happen to a culture when the masses suspect their leaders are far more interested in defending those who hate them than in protecting its own citizens?

I fear we are increasingly moving in this direction. This can be true on various fronts, but overwhelmingly we find what seems to be lies, obfuscations and deliberate deception when it comes to the ever-related issues of Islam and terrorism. Our leaders for the most part seem intent on denying reality here, and are more concerned to protect and make excuses for Islam than they are in defending their own populations.

All this makes for fertile soil not just for all sorts of conspiracy theorists, but for a population that will eventually snap and begin to take matters into their own hands. I am not advocating any of this. I am not fomenting revolution. I am not demanding that we take to the streets.

I am simply pointing out what I see currently happening. And as I tie this in to the lessons of history it is not looking good. Indeed, all this has me quite worried. This sort of stuff just cannot continue. Something eventually has to give. And the latest attack in Melbourne just offers us more of the same.

Our dhimmi leaders, cowardly politicians, clueless media personnel, and gullible Christians are all still insisting this was not about terrorism and Islam, even as the evidence mounts up to the contrary. As I have stated in earlier articles on this, the attacker listed the conditions of Muslims elsewhere as a reason why he did this. And today we learn further about this:

“Flinders St attacker Saeed Noori rambled about Allah and the nation’s top security agency after mowing down 18 people. Acting Chief Commissioner Shane Patton has revealed that Noori made the comments from his hospital bed in the hours after his rampage which left three people on Friday night fighting for life.”

Let me point out this home truth: there are plenty of abused, misused and aggrieved Christians, Jews, Buddhists, Sikhs, Hindus and so on – and some would even be mentally ill – yet we don’t read about them driving vehicles on to crowded sidewalks, slaughtering as many innocents as possible. Why is that?

The “mental illness” mantra is already wearing a bit thin. If they were actually trying to tell us all Muslims are mentally ill, that might be one thing. But that is not what they are trying to say. What they are saying is this: “A good Muslim is one who does not act according to his own faith, nor take it seriously. The devout, obedient Muslim, on the other hand, is mentally ill.” Problem solved!

I think the millions of people who do suffer from genuine cases of mentally illness who have NOT mowed down innocents on sidewalks in speeding vehicles are owed a massive apology from our dhimmi leaders and authorities. They are being painted with a really bad brush here.

While I make no claim to being an expert on mental illness, nor want to belabour all this, a few quotes from those who are experts may be of use here:

There is little consensus in the literature regarding the importance of mental illness in lone-actor terrorism. However, the evidence suggests that mental illness is not a key factor contributing to acts of violence in these cases. It is therefore erroneous to insinuate that psychiatrists have a role in identifying these individuals. It is also highly questionable whether a ‘future potential Breivik’ would – or could – be identified by psychiatrists. In the case of Breivik, the forensic psychiatric evaluation concluded that although he has narcissistic personality disorder, he was not affected by a serious mental disorder when committing the act of terrorism, nor at the time of the evaluation.

Or as one person told me just recently:

A short time ago on Sky News a mental health expert said it was wrong to blame mental health patients for atrocities like Flinders Street. He said statistics show that it is very rare for a mental patient to do such crimes. Mental health people are statistically far more likely to be victims of crimes than perpetrators of crimes. This crime was done by a person who knew exactly what he was doing and he has indicated to police that one of his motives was the treatment of Muslims around the world.

What is it about terrorism that people fail to grasp? I’ll put it as simply as I can: there are individuals (and groups) out there that plan and carry out heinous acts of violence we label as terrorism because they really believe in what they are doing. Whether it is divinely inspired (or mandated) or self-styled legitimate action to right a wrong, some people will engage in these acts out of a sense of justice or to impose on the rest of us what they see as the only way to conduct our lives. There is nothing inherent in any of this that points to mental illness. We really need to stop leaping to the conclusion that perpetrators are suffering from psychological imbalance just because we don’t understand why they are doing these kinds of attacks.

It is simply part of the accepted PC narrative in the West that Islam is just peachy and terrorism cannot be Islamic-based, so we must find another excuse. And right now playing the mental illness card seems to be working just fine for our elites.

Today Chris Kenny said what needs to be said:

The police arrested an Afghan migrant who according to their own reports cited the treatment of Muslims as his grievance and his motivation. Yet Victoria Police waited five hours before sharing any of the detailed information and even then denied any link to terrorism.
This denial is so worrying so ignorant and so dangerous, yet even the Prime Minister adopted this same ridiculous line. They tell us a Muslim migrant from Afghanistan has mown down people and raved about the treatment of Muslims yet they say there is no link to terrorism.
How can the public feel safe if the authorities and politicians won’t even confront the very real enemy of Islamist extremism terrorism. This is the evil whose name they dare not speak — they are in jihad denialism.

Let me finish with a few quotes from commentator Brendan O’Neill. His views sum up what a good many of us are thinking right now. He reminds us that

terror has become a normal part of everyday life. It has contributed to today’s weird acceptance, almost, that strange violent incidents, the occasional truck attack or stabbing rampage or bomb, are part and parcel of living in the West in the 21st century. This strange, muted sense that terror is like the weather — always there and beyond our control — has become more and more pronounced during the past year.

And he points out that another casualty of all this Islamic terror is the death of truth. We are just not supposed to talk about the obvious:

We’re discouraged from asking difficult questions. Debate is frowned on. Wonder if radical Islam is a major problem for the West and you’ll be branded “Islamophobic”. Ask if it was wise of Angela Merkel to welcome hundreds of thousands of migrants from the Middle East into Europe in 2015 and you’ll be called racist.
Even to argue that there are certain French, British, American or Australian values that are good, and that we should encourage newcomers to adopt, is to risk being viewed as a sinner against the multicultural idea that all values are equally valid.
We always see this post-terror: the chilling of debate. The aim is to tame moral thought, dampen dangerous emotions. It sometimes feels like the political and media elites fear us, the public, more than they do the apocalyptic terrorist. After every attack their first response is to say: “There had better not be an Islamophobic backlash in response to this.”
It is becoming clear that the perversely chilled response to terrorism is not an act of defiance. Rather, it speaks to a reluctance in the West to engage in robust debate about terror, religion, immigration and values. It speaks to such a deeply entrenched culture of relativism, PC offence-avoidance and intellectual and moral cowardice that some now think occasional acts of barbarism are a price worth paying if it means we can avoid asking deep, difficult questions about Western society, Islam and multicultural tensions in the 21st century.
We need to change this post-terror culture. We need to recognise that a society that will not even permit anger or moral soul-searching when an eight-year-old girl at an Ariana Grande concert is blown apart is a society that has already been defeated. It is a society that is already dead.

Such cultures will either be dead, or become the ideal fertile soil for an ugly and perhaps violent revolt from the masses. Neither outcome is looking very good.

20 Replies to “Islam and Western Dhimmitude: This is How Revolutions Begin”