There are various ways heretical and cultic groups seek to deny the doctrine of the deity of Christ. To cover all of them here would require quite a few articles. So I wish to look at just two English phrases which are latched on to by some to “prove” that Jesus is not God, but simply a created being.

As is always the case, such terms need to be examined carefully, and each text must be studied in terms of the context it is found in. When we do this we discover that neither phrase demeans who Jesus us, and neither demonstrates that he is just a created being.

The first phrase is “only begotten.” It is used in reference to Jesus being God’s only begotten son, as some of the older versions such as the KJV put it. This translation leads some to think of Jesus as just a created being, not the eternal Second Person of the Trinity.

It is worth looking at the Greek term monogenes which lies behind it. It is used nine times in the Greek New Testament, with John using it five times: 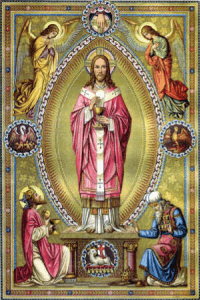 Note how the NIV (used above) renders the word. A number of modern translations have used “only” (ESV), or “one and only” (NIV, HCSB, etc.) instead of “only begotten”. This may be the preferred translation of the term (although debate on this continues).

The term can mean only begotten in the sense of being the only child born to a parent, as in Luke 7:12, 8:42, and 9:38. The only other time it is used it refers to one child (Isaac) among many (Hebrews 11:17). When John uses the term, it always refers to Christ, and it always refers to him being one of a kind, or unique.

As Donald Macleod says of this concept in John: “The Son is the Logos and the Logos has no origin. In the beginning, he was already in being. He is the eternal Son.” To speak theologically of the “eternal generation” of the Son, we mean that the Father is forever Father to the Son, and the Son is forever Son to the Father.

Yes, we too are sons of God, but we only become sons, and by adoption, not by nature. Andreas Kostenberger looks at the term in question more closely:

While Jesus is God’s “one-of-a-kind Son,” God is Jesus’ “Father.” The word pater is more personal than the term theos. It is Jesus’s preferred way of referring to God in John.” Although Jesus taught his disciples, who upon believing in Jesus had become God’s “children” (1:12), to call God “Father” as well (Matt. 6:9 par.), Jesus’ divine sonship remains unique.

Or as Herman Ridderbos says:

“Only begotten” is used as a term for Jesus’ relationship to God only in John. Elsewhere it is used of a parent’s only child (e.g., Lk. 7:12; 8:42), but also as an indication of the value of a certain child with an indication of how many children the parent has. (cf. Hb. 11:17). Here the reference is clearly to oneness not in number but in being, the utter uniqueness of the Sonship of Christ.

A similar term which can cause confusion is the word “firstborn”. In Colossians 1:15 we read, “He is the image of the invisible God, the firstborn over all creation.” This too is seized upon by those who want to declare Christ to be a created being. Ancient heretics such as Arias and modern cultists such as the Jehovah’s Witness for example make much of this passage.

The Greek term is prototokos. It too is found nine times in the Greek New Testament. The term can mean preeminent or first in rank and authority, or it can just mean first born or first begotten, depending on the context. The first usage is how it is used in the Colossians passage.

In their helpful study on the deity of Christ, Morgan and Peterson say this about this meaning:

The background to understanding this meaning of “firstborn” is the Old Testament. There the term is closely linked to the right of the primogeniture. Israel is God’s “firstborn” son (Ex. 4:22), which entails Israel’s status as representative and ruler for God in the world. The Davidic king also receives the title (Ps. 89:27) – “I will make him the firstborn, the highest of the kings of the earth.”
As Schreiner points out, in the case of David, he “was not the first Israelite king. That privilege belonged to Saul. Nor was David the oldest in the family; in fact, he was the youngest. Designating him as the ‘firstborn’ signals his sovereignty, and this is confirmed by Hebrew parallelism. The word ‘firstborn’ is elucidated by the phrase ‘the highest of the kings of the earth.’ In this way, “firstborn” has the connotation of “supreme over,” which is precisely its meaning in Colossians 1:15. This interpretation is confirmed by verse 16—“for by him all things were created”—which not only explains the fact that the Son existed before creation, and that he is the agent of creation, but also that he is supreme over creation because he is its creator.

David Pao concurs: “‘Firstborn’ can denote temporal priority (cf. Luke 2:7; Heb 11:28), which in itself already often points to the rank or supremacy of an individual. This word can, however, be used in a metaphorical sense where rank rather than temporal priority is the primary if not the only focus.”

He also looks at the Old Testament evidence of this and concludes, “The title ‘firstborn,’ therefore, points to the unique and incomparable identity of Christ.” This is clear from what Paul is seeking to do in this first chapter of Colossians.

Indeed, the immediate context of this verse (vv. 15-20) is important. As Marianne Meye Thompson reminds us, “the passage is sometimes thought to be a hymn, or at least from a hymn in praise of Christ.” She continues:

The hymn moves from creation through redemption, speaking of them separately but offering praise for God’s work that begins in creation and anticipates the final reconciliation of all things. In its structure, it sets creation and redemption parallel to each other. Each has its focal point in Christ, who is the firstborn, agent, and goal of both creation and new creation. Because Christ is the agent of creation, he is also the agent of the re-creation of the world. Here, then, in confessional terms and the language of praise we find testimony to the great drama of God’s creation of the world and the promise of its final redemption. The God who made the world in Christ will redeem it through Christ, for God has not abandoned the cosmos and its inhabitants.

This passage, as Douglas Moo puts it, “the most famous in the letter, is one of the Christological high points of the New Testament, and provides a critical basis for the teaching of the letter. The same can be said about what we just saw with John 1, another amazing passage dealing with Jesus as God.

In sum, both of these terms which are used by cultists and heretics to deny the deity of Christ and make him out to be just a created being, are found in passages with very high Christology. John 1 and Colossians 1 are among the most important New Testament passages we have affirming the full deity and eternal nature of Christ.

Instead of these passages and the terms used in them giving us a low view of Christ, they give us a very high and exalted view of the eternal Son of God, the Second Person of the Trinity. That Jesus is eternal, not created, is stated in various places, such as John 1:2; 8:58; Revelation 1:8, 17. It is always an error to speak of him as a created being.

3 Replies to “The Deity of Jesus Affirmed”