This passage has to do with the two different offerings brought to God – one by Abel and one by Cain. We are told that one of the offerings was accepted by God and one was not. Just why is that? Before attempting an explanation, let me first offer the actual text:

Now Abel kept flocks, and Cain worked the soil. In the course of time Cain brought some of the fruits of the soil as an offering to the Lord. And Abel also brought an offering—fat portions from some of the firstborn of his flock. The Lord looked with favor on Abel and his offering, but on Cain and his offering he did not look with favor. So Cain was very angry, and his face was downcast. 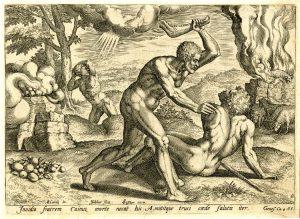 A common explanation for the difference is that Abel brought a blood offering, and this was somehow superior. Since the shedding of blood is so important later on in the sacrificial system of ancient Israel, and in the death of Christ, it is supposed that this explains the superiority of Abel’s offering.

Yet the passage does not actually tell us this. Indeed, a close look at the text, along with other biblical passages about it, make it clear that there is more going on here than just the actual offering. A major element of this is the fact that God cares as much about the giver as the gift.

It is not always a question of how acceptable a particular gift or offering may be, but what sort of person the giver or offerer is. We are given a clear clue about this in the New Testament. In Hebrews 11:4 we read: “By faith Abel brought God a better offering than Cain did. By faith he was commended as righteous, when God spoke well of his offerings. And by faith Abel still speaks, even though he is dead.”

So the issue of faith is part of all this. Whatever the reason for his superior offering (and Genesis 4 does not tell us explicitly), Abel did have faith to go with his. Let’s look at this more closely. Cain is a farmer and Abel is a shepherd, so what they each brought should not surprise us. And there certainly is a place for grain offerings (see for example Leviticus 2 and 6:14-23).

But Abel is seen as offering an acceptable gift, because he is a more acceptable person – Cain did not and was not. Most commentators of recent times make these sorts of distinctions. Many note the phrasing used in the passage. Says Tremper Longman:

The NIV nicely captures the nuance of the Hebrew when it describes Cain’s sacrifice as “some of the fruits of the soil.” Abel’s sacrifice comes from “fat portions from some of the firstborn of his flock.” In a word, Cain offered the ordinary and Abel the best, and of course the quality of their offering reflects the condition of their hearts. Abel is enthusiastic in his worship, while Cain is basically disinterested.

Cain evidently was indifferent about his offering, but Abel was careful about his. The rabbinic commentators note that “fat” and “firstborn” mean that Abel gave God the pick of the flock. The difference was that of heart attitude. Cain came to God on Cain’s own self-prescribed terms, but Abel came to God on God’s terms. Cain’s spirit was arrogant, as the subsequent story will reveal.

And Kenneth Mathews puts it this way:

God’s response toward Cain and Abel, therefore, was not due to the nature of the gift per se, whether it was grain or animal, but the integrity of the giver. The narrative ties together the worshiper and his offering as God considers the merit of their individual worship…. Both giver and gift were under the scrutiny of God. Cain’s offering did not measure up because he retained the best of his produce for himself…. Unlike a human observer, God sees the condition of the human heart and weighs the motive of the worshiper (e.g., 1 Sam 16:7). Elsewhere Scripture shows that the Lord requires of the giver an obedient and upright heart (e.g., 1 Sam 15:14; Hos 6:6; Matt 5:24).

More could be said on all this. But as I mentioned above, we are not specifically told in Gen. 4 why the one offer is preferred by God to the other. So the above thoughts may be of some help to get some insight here, but we are still left with mystery to an extent.

The passage I quoted from in Hebrews helps us somewhat here. Two other New Testament texts – both dealing with Cain – give us a bit more understanding of Cain. Recall that later in Gen. 4 we read about how Cain killed Abel. So he was a bad dude all along it seems. Here are the two NT texts:

1 John 3:12 Do not be like Cain, who belonged to the evil one and murdered his brother. And why did he murder him? Because his own actions were evil and his brother’s were righteous.

Jude 1:11 Woe to them! They have taken the way of Cain; they have rushed for profit into Balaam’s error; they have been destroyed in Korah’s rebellion.

As Mathews said, and is worth repeating, “Unlike a human observer, God sees the condition of the human heart and weighs the motive of the worshiper (e.g., 1 Sam 16:7).” So we must believe that God had a sound reason to favour the offering of Abel over Cain.

God knew what was in his heart, and God cares about the person as much as about what the person does. As Chesterton once put it, “The gift without the giver is bare.” And the lessons for Christians today should be clear enough. What we do outwardly is not all that matters.

The Pharisees and hypocrites did things to please men. As Jesus said in Matthew 6:1: “Be careful not to practice your righteousness in front of others to be seen by them. If you do, you will have no reward from your Father in heaven.” We too can go through all the right religious motions and do all the right things (eg., go to church, lift our hands in worship, put money in the offering plate, and so on), but this is not all that God looks at.

He looks at the heart. If we have all these outward acts that look good in religious circles, but on the inside our soul is displeasing to God, we will get nowhere fast. We can fool men but we cannot fool God. So let the lesson sink in concerning Cain and Abel and their offerings to God.

At the end of the day, Cain’s heart was not right with God, even though outwardly we would not know this, at least in terms of his offering. Every heart will one day be exposed. Best to let Christ deal with our inward man now. We sure won’t want him to deal with us at the last judgment.