The best way to destroy a culture is to turn everyone into brainless zombies. And that is exactly where the militant homosexual and transgender agendas are taking us. Every day we see new horror examples of idiocy running amok, and common sense being thrown out the window.

The activists and their useless supporters in government, media and elsewhere are actually demanding that we deny reality, biology, reason and our very DNA as they foist upon us the most radical and outrageous social engineering agendas ever seen. 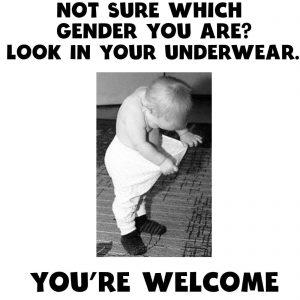 In Orwell’s prescient novel 1984 the Big Brother torturer could manage to get the hero to say that four fingers being held up were actually five. Today we do not even need the torture. The activists have come so far that our clueless leaders have hopped on board without even putting up a fight. Every moronic and anti-reality bit of nonsense the militants throw our way, the authorities and politicians cheerily acquiesce to.

Consider two recent cases of this complete insanity taking over our governments. Both cases come from Queensland. Just what are they putting in the drinking water up there? It is scary stuff indeed. My first example is a breaking story, and it shows that the minds of Queensland bureaucrats have clearly turned to mush. Get a load of this:

Transport bureaucrats have scrapped gender on all Queensland licences after complaints from the LGBTI community, in a politically correct overhaul of the licensing scheme. A requirement for Queenslanders to detail their height has also been removed, after concerns that the collection of personal information by transport authorities was potentially discriminatory.
The Department of Transport and Main Roads (TMR) last night confirmed the move but blamed the changes on a need to make driver’s and marine licences compliant with new anti-discrimination laws. However, an internal document obtained by The Courier-Mail states that gender and height are being removed because of complaints that collecting the information may be viewed as discriminatory.
Further personal information including eye and hair colour is also being scrubbed from records attached to licences because it may be “perceived as discriminatory”, the document reveals. The State Government last night confirmed there had been a handful of complaints about drivers’ gender being included on licences.
But a spokesman for Roads Minister Mark Bailey said the main reason for the change was federal anti-discrimination laws and improvements in technology that meant the data was not needed to identify someone.
The Transport and Main Roads department quietly stopped recording people’s gender and height for all new and renewed licences in October 2016. People who have a current licence but do not want it to show their gender or height are able to apply for replacement card without this information.

Good grief! Idjuts! How completely bonkers have these bureaucrats become? The next step is surely to get rid of drivers’ licences altogether. After all, how discriminatory! Why should toddlers be excluded? Or triple amputees? Or those in a coma? Or dead people? Or Martians? How dare you be so bigoted and narrowminded!

I object, so I fully expect on the basis of my sole protest that the Queensland government henceforth scrap every licence and every other requirement for driving. End this ugly bigotry now! Stop the oppressive discrimination and hate!

Thankfully a few other folks were not thrilled with these numbskull ideas. As one wit posted on the social media:

And a breath of sanity was found in the newspaper article:

Opposition Leader Deb Frecklington described the changes as “madness” and said the Government needed to focus on real issues, not political correctness. “It is offensive to taxpayers that their hard-earned money has been wasted on this rubbish,” she said.

But wait, there’s more. Consider an earlier example of Queensland idiocy, also having to do with the denial of reality. The news item began:

Volunteers for the Gold Coast Commonwealth Games have been told to use gender-neutral language to avoid causing offence. The Games Shapers handbook, which has been handed to 15,000 volunteers and official staff and contractors instructs workers to avoid phrases like “ladies and gentlemen” and “boys and girls”. It also includes instructions to use the term parents instead of mother or father and partners, rather than husbands or girlfriends.

More good grief! Just what is wrong with these people? Have they got nothing better to do? And we have to pay for their moonbattery with our tax dollars?! Thankfully most normal people are appalled at this lunacy, including, again, Frecklington:

Queensland opposition leader Deb Frecklington said the rules were “common sense gone mad” and urged Games organisers to rethink their instructions. “We might be a bit folksy and we might use a bit of different language but, at the end of the day, let’s just be Queenslanders,” Ms Frecklington said yesterday. “As long as people are being respectful, let Queenslanders be Queenslanders.”
One of the games’ volunteers Liz McCleary, from Southport, also fears political correctness will kill the character of the Commonwealth Games. “It (volunteering) was something I was really looking forward to, but not anymore,” she said. “This whole political correctness has gone too far. For us not to be able to say things like boys and girls, it’s just stupidity.
The rules also state that political opinions should not be expressed by volunteers. “No one wants to belittle anybody, but who says this is belittling anyone? I really feel for the next generation because they are going to be so confused.”

This sheer madness has got to stop. Hopefully most ordinary folks are getting absolutely sick and tired of all this. They have to, or we are all doomed. Something has to give, and soon. This anti-reality insanity just cannot go on for much longer. A bit of realism and common sense is the need of the hour.

And I am happy to report that at least my wife has this by the bucketful. Yesterday we went to see the new Churchill flick. Before it began there was an ad for a new pro-homosexuality film. The trailer finished with these really dumb words “Why is straight the default?” My wife instantly replied, “Because only straights can reproduce.”

I wish everyone was as smart and grounded in reality as my wife is. She would make a better leader and politician than 90 per cent of the clowns and ignoramuses now running the show.