I have said it before: I strongly believe God can and does providentially raise up leaders in times of great darkness and crisis to avert what looks like an utterly terrible outcome. I often cite the heroic trio of Reagan, Thatcher and Pope John Paul II who stood strong against godless communism and helped tip the balance in the Cold War.

Such leaders may not always even have been keen Christians. Think of the pagan king Darius who allowed the Jews to return to Jerusalem and rebuild the temple. One interesting Old Testament book in this regard is the book of Esther. Even though God is nowhere mentioned in the book, his providential hand is everywhere seen. And in it we have the classic line found in Est. 4:12-14:

When Esther’s words were reported to Mordecai, he sent back this answer: “Do not think that because you are in the king’s house you alone of all the Jews will escape. For if you remain silent at this time, relief and deliverance for the Jews will arise from another place, but you and your father’s family will perish. And who knows but that you have come to your royal position for such a time as this?” 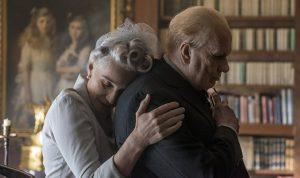 Well, yesterday I finally did see the movie, Darkest Hour. It was quite good, all things considered. Some liberties were taken with the historical record of course, but it did nonetheless show us a strong leader who also felt the weight of the entire free world on his shoulders.

Churchill was certainly not perfect, and he has had plenty of detractors. Many folks have offered various lengthy lists of his sins and shortcomings – real or perceived. Not all these charges are accurate, and many are disputed. But taken as a whole, this was a great man who was at the right place at the right time.

His role in helping to defeat Hitler and save Britain and all of Europe is clear. Sure, there are many factors to consider here, including the eventual entry of the US into the war. But most experts agree that without Churchill things would likely have ended up quite differently.

For nearly a decade before the war began, Churchill had been almost a lone voice, warning of the dangers of German rearmament, Hitler and the Nazis. His pleas mainly fell on deaf ears. Recall that in late September 1938 British Prime Minister Neville Chamberlain signed the Munich Agreement in Berlin with Hitler and other leaders. He then proclaimed, “I have returned from Germany with peace for our time”.

Of course less than a year later Hitler invaded Poland, starting WWII. Had people listened to Churchill earlier things would likely have turned out quite differently. Plenty of authorities could be consulted here. Indeed, the books and biographies on Churchill seem endless.

I mentioned some of the better ones in my recent piece. Let me just run with a few of the newer books I listed there. Boris Johnson’s quite well-written and well-received 2014 volume The Churchill Factor makes this point repeatedly. As he writes:

These days we dimly believe that the Second World War was won with Russian blood and American money; and though that is in some ways true, it is also true that, without Churchill, Hitler would almost certainly have won….
Churchill matters today because he saved our civilisation. And the important point is that only he could have done it. He is the resounding human rebuttal to all Marxist historians who think history is the story of vast and impersonal economic forces. The point of the Churchill Factor is that one man can make all the difference.
It was thanks to Churchill – and at crucial moments, thanks to him alone – that Britain did hang on. It is clear that there was something utterly magical about his leadership that summer. With his poetic and sometimes Shakespearean diction he made people feel noble, exalted – that what they were doing was better and more important than anything they had done before.
He mentally elided ideas of Englishness and freedom, and it helped that the weather was fine, because there is nowhere lovelier than England in June; and perhaps that gentle beauty sharpened the general sentiment he encouraged: that the threat must be repelled, and that this was an island to fight and to die for. He gave the people an image of themselves: as a tiny band of heroes – analogous to the tiny band of RAF pilots – holding out against tyranny and against the odds, the story from Thermopylae to Rorke’s Drift – the eternal and uplifting story of the few against the many.

Just how much he was personally responsible for the defeat of Hitler and the salvation of his nation – and Europe – of course continues to be discussed and debated. In another somewhat recent biography we have another take on all this. In Paul Johnson’s 2009 volume Churchill, he asks the question: “Did Churchill personally save Britain?”

He offers ten factors to consider in answering this question, including “the concentration of power in Churchill’s person, with the backing of all parties”; his furious productivity and relentless energy (not bad for a 65-year-old); his incredible oratory; his constant lookout for allies; and his “uncanny gift for getting priorities right”.

Johnson then concludes: “The answer must be yes. No one else could have done it. This was what was felt at the time by the great majority of the British people, and it has been since confirmed by the facts and documents at our disposal.”

All this and more could be mentioned of course about the great man. But one newer book may offer us the most important factor of all: his strong sense of destiny and providence. The great-grandson of Winston Churchill, Jonathan Sandys, along with Wallace Henley, penned an important book on this in 2015 entitled God & Churchill (Tyndale).

The subtitle gives us what we are looking for: “How the great leader’s sense of divine destiny changed his troubled world and offers hope for ours.” The 250-page book is well worth reading. It dispels the notion that Churchill was just a dogged secularist who had no place for God and the supernatural.

To the contrary, he read the Bible and prayed often, and saw his role as one in which he was providently led to. As the authors carefully document, his parents certainly did not give him what he needed, spiritually speaking, but his nanny with a simple faith helped instil some essential values and beliefs into young Winston.

His love of the King James Bible and of “Christian civilisation” was largely learned from her. By his early teenage years he had a clear sense of divine destiny. Consider this amazing conversation with a friend from 1891 when he was just sixteen years old:

“I have a wonderful idea of where I shall be eventually. I have dreams about it.”
“Where is that?”
“Well, I can see vast changes coming over a now peaceful world; great upheavals. terrible struggles; wars such as one cannot imagine; and I tell you London will be in danger – London will be attacked and I shall be very prominent in the defence of London. This country will be subjected somehow, to a tremendous invasion, by what means I do not know, but I tell you I shall be in command of the defences of London and I shall save London and England from disaster.”

Wow. There were of course many setbacks along the way before getting to that place, but he certainly became the man for the hour, as this book and the new film make clear. By May 1940 he was just where he was meant to be. And the rest is indeed history.

As the history books – and this new film – show, Churchill knew his destiny and that of his beloved country would certainly be one involving great sacrifice. “I have nothing to offer but blood, toil, tears and sweat,” as he put it in his May 13,1940 House of Commons speech. The authors state:

The great weight that Churchill carried was, to his mind, nothing less than the survival of “Christian civilization” against the greatest threat it had ever faced. Churchill knew it was not just Britain’s survival that had been laid upon him, but also all the values of justice, freedom, respect for humanity, and peace inherent in Western culture. He sensed that, if he failed, the world would become hellish. It was indeed an “intolerable burden,” but one that Winston Churchill was willing not only to tolerate but to carry all the way to victory – or, if need be, to death.

And it was his faith and his sense of divine destiny that helped carry him through all those years, including his wilderness years before May 1940. As Sandys and Hendley write:

Winston Churchill was not an overtly religious man, but he was a man of faith. He believed in God’s ultimate providential care—for himself and for his nation. Such a faith was foundational to his internal fortitude when all external signs pointed to disaster….
Churchill did not regard Providence as an impersonal force; he saw it as the guiding hand of God. In his very first speech as prime minister, Churchill said that the policy of his new government would be to wage war against Hitler “with all our might and with all the strength that God can give us.”

They close their important volume with this vital question: “Has God placed a Churchill among us in our turbulent times, when once again the survival of Judeo-Christian civilization is at stake?”

That indeed may be the question of the hour. And the answer to it may well make all the difference.