All the prophets could be discussed here in this regard, but Jeremiah certainly exemplifies what we are talking about. Jeremiah is often known as the weeping prophet, and with good reason: his words and his life are full of passion and pathos. Any number of passages will show the close connection between the anguish of God and the anguish of his servant. 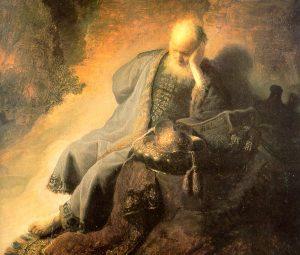 You who are my Comforter in sorrow,
my heart is faint within me.
Listen to the cry of my people
from a land far away:
“Is the Lord not in Zion?
Is her King no longer there?”
“Why have they aroused my anger with their images,
with their worthless foreign idols?”
“The harvest is past,
the summer has ended,
and we are not saved.”
Since my people are crushed, I am crushed;
I mourn, and horror grips me.
Is there no balm in Gilead?
Is there no physician there?
Why then is there no healing
for the wound of my people?

In his commentary on Jeremiah, J. A. Thompson says this: “Jeremiah was never a dispassionate observer of his nation’s suffering, but entered into the anguish of the people and suffered with them.” He notes that Jeremiah was not alone among the prophets in this, and goes on to say,

“The problem of these men was that they were bearing a message of divine judgment while at the same time sharing the sufferings of the people either in vision or in fact. But they were men torn asunder between God and the people, to both of whom they were bound with deep ties. This combination of love and anguish is nowhere seen more clearly than in Jeremiah.”

F. B. Huey says this about Jer. 8: “This passage probably earned Jeremiah his reputation as the ‘weeping prophet’ (along with 14:17), but God is also weeping in this passage as evidenced by the fivefold ‘my people,’ a phrase frequently expressing God’s covenant relationship with Israel (first found in Exod 5:1).”

Christopher Wright says of these chapters:

On the one hand, there is penetrating insight into the sheer perversity of sin, along with the destructiveness of idolatry. . . . On the other hand, there is the pathos of divine grief. So intense is the poetry, and so seamless in the way it switches from one speaker to another, that it is hard to decide at many points whether we are hearing the voice of Jeremiah or of God. Probably we should not try to decide, for the voice of one expresses the heart of the other, and the tears of one flowed for the grief of the other. There are few places in the whole Bible where we have a more telling glimpse into the inner emotional life of our God than here – only at Calvary do we see and hear more.

Here again is Jeremiah sharing the anguish of God, Indeed, it is a puzzle to decide whose anguish is referred to here. . . . We are not sure whether we are reading lyrical poetry or the words of Yahweh. But the reason why we cannot tell whether we are sharing Jeremiah’s anguish or God’s is that both are the same thing, because Jeremiah is identified with God. Jeremiah is torn apart not merely because of his one affliction, nor only because of Judah’s affliction, but because of the affliction of God, which God allows him to share.

Willem VanGemeren says this of them:

Jeremiah, forsaken and rejected by people, experienced many setbacks during his lengthy ministry, but he gradually adjusted to being a loner. Kings, leaders, priests, and false prophets opposed him. His “confessions” draw us into the personality of the prophet and into his dialogical communion with his God. . . . They are in the form of lament (soliloquies) by which he – like the psalmists and our Lord Jesus in the Garden – struggled with God’s will. . . . In Jeremiah, the suffering servant of God and the spokesman of God are one.

Consider the first of Jeremiah’s confessions, or laments: 11:18-12:6. Immediately following this lament is a lament by Yahweh (12:7-17). Such is the identification of God and his prophet. As Craigie, Kelley and Drinkard remark,

the account does not end with Jeremiah’s lament; it is answered by a lament from God. The divine lament portrays God as also suffering because of evil, evil from the hand of his own people. . . . When the Lord opened himself up to his people in love, he also opened himself to the possibility of hurt. These verses present an image of God passionately involved with his world and his people. It is amazing to think that evil can cause God the same anguish that it causes man. Passages such as this forever discredit the image of God as dispassionate and removed from his world.

As already mentioned, the fact that at times it is unclear whether Yahweh is speaking or a prophet is speaking is further evidence of what a close connection between God and his prophets there is. Terrance Fretheim has a helpful chapter on this subject in his 1984 volume, The Suffering of God. He notes that the “prophet’s life was reflective of the divine life” (149) and as such, shared in God’s grief over a sinful and wayward people:

“Given the fact that the laments of prophet and God are so similar in their form and general orientation, in fact sometimes standing side-by-side, it is difficult to avoid the conclusion that the prophet’s laments are a mirror of the laments of God. In and through the lamenting of the prophet one can hear the anguish of God over what has happened in his relationship with the people.”

He continues, “As with God, the prophet suffers over what has happened to the people or in anticipation of what will happen. Examples from Jeremiah are particularly striking. The suffering of prophet and God are so interconnected that it is difficult to sort out who is speaking in many texts. Nor should one try to make too sharp a distinction. As if with one voice, prophet and God express their anguish over the suffering of the people.”

In his now classic work, The Prophets, Abraham Heschel offers similar thoughts. In an incisive chapter entitled “The Theology of Pathos,” Heschel reminds us that the “prophets had no theory or ‘idea’ of God. What they had was an understanding. . . . They disclosed attitudes of God rather than ideas about God.”

The prophets could reveal God’s heart to his people because they shared in that heartbeat through close communion with God: “To the prophet, knowledge of God was fellowship with Him, not attained by syllogism, analysis or induction, but by living together.”

What gives the prophets such power and authority is the fact that they are sharing God’s burdens with God’s people. They partake in the broken heart of God. They experience it – albeit imperfectly and partially – just as God experienced it:

The prophet does not see the human situation in and by itself. The predicament of man is a predicament of God who has a stake in the human situation. Sin, guilt, suffering, cannot be separated from the divine situation. The life of sin is more than a failure of man; it is a frustration to God. Thus, man’s alienation from God is not the ultimate fact by which to measure man’s situation. The divine pathos, the fact of God’s participation in the predicament of man, is the elemental fact. . . . Never in history has man been taken as seriously as in prophetic thinking. Man is not only an image of God; he is a perpetual concern of God.

Let me finish with two concluding comments. Philip Graham Ryken in his book of sermons of Jeremiah offers this helpful summary statement:

The suffering of God is something that Western theology has not felt comfortable with, but it is an unquestionably biblical dimension of God’s interaction with the world. God reacts to sin and evil with both anger (in relation to what it does to God’s love and goodness), and with pain (in relation to what it does to humans and to the rest of his creation). We should not set either of these against the other. We must not think, for example, that if God is grieved by our sin he cannot also be angry about it or punish us for it. On the contrary, the very nature of the relationship is such that terrible anger and desperate grief are both simultaneously appropriate reactions, as those who have experienced or witnessed a marriage breakdown will immediately agree. Jeremiah has already portrayed the relationship between YHWH and Israel as a marriage that began with a honeymoon and ended in divorce. Anger and tears? Absolutely.

The relevance of all this for today’s Christians should be obvious. We need prophets like Jeremiah who reflect the pathos of God and a passion for people. Such people love God, they love God’s people, and they grieve and mourn as well as pray, intercede and offer hope.

6 Replies to “Jeremiah and the Suffering of God”