To those who participate in them or cheer them on, and for much of the surrounding culture, the various pride marches that homosexuals and others regularly put on are just colourful and vibrant parades. Just like any other festive march, they are seen as fun and happy events, and certainly harmless – even a good thing.

But what does God think about them? At the end of the day that is the only thing that really matters. It does not matter how many people may participate in them or watch them, or how much the mainstream media utterly gushes over them. What matters is what the creator of the universe feels about them. 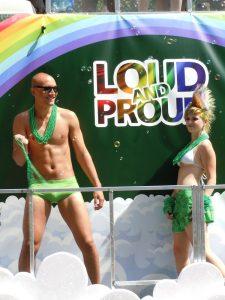 And his view on all this is quite different indeed. Consider just a few passages that come to mind here:

Psalm 12:8 [The wicked] freely strut about when what is vile is honored by the human race.

Psalm 36:1-4 I have a message from God in my heart concerning the sinfulness of the wicked: There is no fear of God before their eyes. In their own eyes they flatter themselves too much to detect or hate their sin. The words of their mouths are wicked and deceitful; they fail to act wisely or do good. Even on their beds they plot evil; they commit themselves to a sinful course and do not reject what is wrong.

Proverbs 2:14: [The wicked] take pleasure in doing wrong, and they enjoy the twisted ways of evil.

Proverbs 4:16 [The wicked] cannot rest until they do evil; they are robbed of sleep till they make someone stumble.

Isaiah 3:9 The look on their faces testifies against them; they parade their sin like Sodom; they do not hide it. Woe to them! They have brought disaster upon themselves.

While these verses of course do not have in mind the Sydney Gay and Lesbian Mardi Gras or any other contemporary homosexual pride events, some of them most certainly do refer to homosexuality and that sort of sin. That is certainly the case with the passage from Isaiah with its direct reference to Sodom.

And passages like Romans 1:18-32 speak especially about the sin of homosexuality. Paul concludes his strong words there on the topic this way: “Although they know God’s righteous decree that those who do such things deserve death, they not only continue to do these very things but also approve of those who practice them.”

To say all this is not to minimise other sins. Someone gossiping about others all day, or refusing to forgive another person, or holding a grudge against another, or cheating on his taxes, or lusting after his secretary, etc., is also a sinner. So I am not saying there are only some sins that are horrible – they all are, and they all sent Christ to the cross.

And the Bible especially singles out those who take pride in their sin, who flaunt it, who celebrate it, and who parade it. Some of the verses offered above are indications of this. Some sinners at least more or less know that what they are doing is wrong, and may even try to break free from it. But others delight in their sin, justify their sin, parade their sin, and flaunt their sin.

It seems the various homosexual pride marches are a perfect indication of this sort of thing. They want the whole world to see their sin and to embrace it and celebrate it. The holy and righteous God of the universe is certainly not going to take all this lightly. Repentance is the only way forward here.

Oh, and one more verse. Since innocent and vulnerable children are so often dragged into these debauched events by adult activists, the words of Jesus seem quite appropriate here. As we read in Luke 17:1-2: “Things that cause people to stumble are bound to come, but woe to anyone through whom they come. It would be better for them to be thrown into the sea with a millstone tied around their neck than to cause one of these little ones to stumble.”

Let me deal with a related issue here. Should Christians attend homosexual pride marches? In my books, yes and no is the short answer. Yes they should go if their intention is to offer a biblical witness, sharing the good news of the gospel, telling people they can have their sins forgiven and they can be delivered from their dead-end lifestyles.

Preaching biblical truth is always a good thing if God calls you to do it at such events. It is one thing to seek to reach out to those heading to hell, but it is quite another thing to go there in solidarity with the perversion and sin. Sadly some Christians will go to these marches to participate in them, identify with the marchers, and celebrate and endorse the lifestyle.

All this discussion arises from a piece I wrote yesterday concerning a leading politician claiming to be a Christian who happily attended and entered into the festivities of a homosexual pride march over the weekend. See here: billmuehlenberg.com/2018/03/05/26640/

This is not the first time of course such things have happened. Indeed, it has at times been even worse, with some “Christian” leaders marching arm and arm in solidarity with homosexuals as they flaunt their sinful lifestyles. I have discussed this in the past, including in this older piece: billmuehlenberg.com/2008/03/02/marching-with-the-10-rebs/

As I wrote a decade ago,

One homosexual, writing in the Sydney Star Observer, said that it was a great idea that these church leaders were marching. “Shifts like this will mean enormous things for gay Christians, GLBT kids growing up in Christian homes, and for others whose adult relationships with friends and family are strained by religious-based prejudices.”

Exactly. And if these same Rebs march in fornication pride celebrations, that will also mean ‘enormous things for fornicating Christians, fornicating kids growing up in Christian homes, and for others whose adult fornication relationships with friends and family are strained by religious-based prejudices’.

Of course all this is exactly part of the long-term homosexual agenda: the complete and total acceptance and blessing of the homosexual lifestyle. They know that the Christian church is the last obstacle to this aim. Thus they are rapt that these gullible Rebs are handing them on a silver platter what they are seeking.

Sadly but expectedly, at least one Christian leftist got quite upset with me when I wrote that, claiming Jesus was a friend of sinners and that it is basically just peachy to march with defiant homosexuals. I replied:

Sorry but I’m not buying your argument. It is typical liberalism – theological and political. To be consistent David, you and the Revs should be marching in a money changers march, apologising for Jesus’ treatment of the money changers. He was certainly intolerant, judgmental and unloving there, wasn’t he?

Sorry, you have turned the gospel on its head, and perverted it. Jesus identified with sinners, yes, but always with a view to setting them free of their bondage by means of repentance. He would never glorify and promote sexual exhibitionism and debauchery.

The whole of Scripture would speak to these truths. But let me offer just one famous passage: Psalm 1:1. It says,

Blessed is the one
who does not walk in step with the wicked
or stand in the way that sinners take
or sit in the company of mockers.

Such people are blessed as they avoid evil and do not go along with it. The opposite of being blessed is to be cursed. Those who cannot discern right from wrong, and simply go along with and endorse sin are certainly not the recipients of God’s blessing.

If Christians think they are doing God a favour by making excuses for sin, celebrating sinful lifestyles, and publicly flaunting moral evil, they had better think again. And if they are Christian leaders doing this, I would not want to be in their shoes when they one day stand before their creator and judge.

17 Replies to “Another Perspective on ‘Pride’ Marches”