One of the easiest ways to destroy the credibility of the church and harm the cause of Christ is when Christian leaders and those believers in the public eye get caught out in some sort of sin and scandal. Whether it be financial scandal or sexual scandal, when it happens the reputation of Christianity is damaged, and more importantly, the name of Jesus Christ is dragged through the mud. 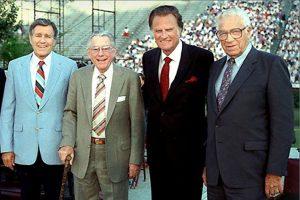 It happens too often when some high-flying preacher or teacher is caught having an affair or fleecing the flock of its hard-earned cash. These big three are always a major temptation: gold, girls and glory. If a sex scandal or a financial mess does not drag down a leader, arrogance, pride and ego will.

Thus we all need to be so very careful here, especially those in leadership and those with a very public ministry. Steps must be taken beforehand to ensure that scandal and sin and sacrilege do not take place. And the Bible gives us many examples of this.

One obvious case is that of Joseph. He was tempted big time by a big cheese female and it would have been so easy to cave in. But it is clear that he had made up his mind on this matter a long time earlier. He did not have to think about whether he wanted to give in or not in the heat of the moment.

He had already decided to resist sexual temptation, so when Potiphar’s wife laid it on thick, he did the only sensible thing he could: he fled. As we read in Genesis 39:6-12:

So Potiphar left everything he had in Joseph’s care; with Joseph in charge, he did not concern himself with anything except the food he ate. Now Joseph was well-built and handsome, and after a while his master’s wife took notice of Joseph and said, “Come to bed with me!”
But he refused. “With me in charge,” he told her, “my master does not concern himself with anything in the house; everything he owns he has entrusted to my care. No one is greater in this house than I am. My master has withheld nothing from me except you, because you are his wife. How then could I do such a wicked thing and sin against God?” And though she spoke to Joseph day after day, he refused to go to bed with her or even be with her.
One day he went into the house to attend to his duties, and none of the household servants was inside. She caught him by his cloak and said, “Come to bed with me!” But he left his cloak in her hand and ran out of the house.

Not only would it have been so easy to give in, but because he stood resolute and insisted on personal holiness and honouring God, he paid a very heavy price for his purity and integrity: he was thrown into prison. Talk about costly obedience.

I say all this because just recently I penned a piece on Billy Graham and his passing. In the article I drew from an earlier article I had penned on him based on his autobiography. I mentioned how early on in his ministry he decided that integrity would be his number one priority.

He determined that he would not allow even a hint of scandal to overshadow his ministry. You can read all about this in Just As I Am: The Autobiography of Billy Graham (Harper Collins, 1997) on pages 127-129. Let me offer a brief intro to this, and then quote a large portion of it. Late in 1948 Graham and some of his team members were in Modesto, California. He writes:

From time to time Cliff [Barrows], Bev [George Beverly Shea], Grady [Wilson], and I talked among ourselves about the recurring problems many evangelists seemed to have, and about the poor image so-called mass evangelism had in the eyes of many people. Sinclair Lewis’s fictional character Elmer Gantry unquestionably had given traveling evangelists a bad name. To our sorrow, we knew that some evangelists were not much better than Lewis’s scornful caricature.

One afternoon during the Modesto meetings, I called the Team together to discuss the problem. Then I asked them to go to their rooms for an hour and list all the problems they could think of that evangelists and evangelism encountered.

When they returned, the lists were remarkably similar, and in a short amount of time, we made a series of resolutions or commitment among ourselves that would guide us in our future evangelistic work. In reality, it was more of an informal understanding among ourselves – a shared commitment to do all we could do to uphold the Bible’s standard of absolute integrity and purity for evangelists.

The first point on our combined list was money. Nearly all evangelists at that time – including us – were supported by love offerings taken at the meetings. The temptation to wring as much money as possible out of an audience, often with strong emotional appeals, was too great for some evangelists. In addition, there was little or no accountability for finances. It was a system that was easy to abuse – and led to the charge that evangelists were in it only for the money.

I had been drawing a salary from [Youth for Christ] and turning all offerings from YFC meetings over to YFC committees, but my new independent efforts in citywide campaigns required separate finances. In Modesto we determined to do all we could to avoid financial abuses and to downplay the offering and depend as much as possible on money raised by the local committee in advance.

The second item on the list was the danger of sexual immorality. We all knew of evangelists who had fallen into immorality while separated from their families by travel. We pledged among ourselves to avoid any situation that would have even the appearance of compromise or suspicion. From that day on, I did not travel, meet or eat alone with a woman other than my wife. We determined that the Apostle Paul’s mandate to the young pastor Timothy would be ours as well: “Flee … youthful lusts” (2 Timothy 1:22).

Let me interrupt at this point and point out some obvious truths here. Two recent events have showed how vitally important this second commitment was, including the insistence on not being alone with another woman. When it was recently reported that US Vice President Mike Pence does not dine alone with other women, but only his wife, he was blasted by leftists and mercilessly ridiculed by the leftist media.

But at the same time we had the Harvey Weinstein affair and others like it, where sexual harassment, sexual predation and even sexual assaults and rapes were being reported all over the place. It seemed that everyone was coming forward with more lurid stories of sexual assault and the like.

Hmm, it sounds like the resolution made by Graham and his team was 100 per cent sensible and absolutely essential to help prevent this culture of sexual sleaze and sexual abuse. But let me get back to his description of this meeting:

Our third concern was the tendency of many evangelists to carry on their work apart from the local church, even to criticize local pastors and churches openly and scathingly. We were convinced, however, that this was not only counterproductive but also wrong from the Bible’s standpoint. We were determined to cooperate with all who would cooperate with us in the public proclamation of the gospel, and to avoid an antichurch or anticlergy attitude.

The fourth and final issue was publicity. The tendency among some evangelists was to exaggerate their successes or to claim higher attendance numbers than they really had. This likewise discredited evangelism and brought the whole enterprise under suspicion. It often made the press so suspicious of evangelists that they refused to take notice of their work. In Modesto we committed ourselves to integrity in our publicity and our reporting.

So much for the Modesto Manifesto, as Cliff called it in later years. In reality, it did not mark a radical departure for us; we had always held these principles. It did, however, settle in our hearts and minds, once and for all, the determination that integrity would be the hallmark of both our lives and our ministry.

Wow, what a fantastic set of resolutions. Would that all of God’s people were so scrupulous and concerned about their personal integrity and the integrity of their ministries. Would that all believers were so committed to not smearing the name of Christ or doing damage to the Christian gospel.

So many scandals and so much derision of Christ and Christianity could be avoided if we adopted such principles and fiercely clung to them. Well done Billy Graham and team – you are champions.

4 Replies to “Integrity in Ministry – Lessons from Billy Graham”