An interesting discussion came up on the social media just recently. One terrific conservative writer spoke about meeting an Australian Premier and commented on her Christian faith. I and others quickly pointed out that just two days earlier she was happily hanging around with Malcolm Turnbull at the debauched Gay and Lesbian Mardi Gras.

His response to this was, “Yeah she spoke about that mate. As Premier she said she has to represent everyone, even when in her conscience she disagrees.” Umm, sorry, but I really do not think this cuts it – not at all, and for a number of reasons. 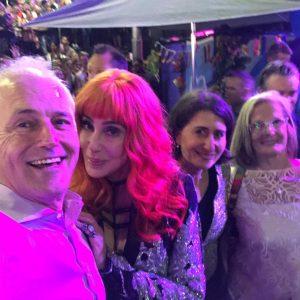 First of all, I must admit to not knowing all that much about her. She was born to Armenian immigrant parents who were married in an Armenian Orthodox church in Sydney. She continues to be part of that faith tradition. But she also has supported things like fake homosexual marriage.

To be honest, that tells us a lot already about her faith – or lack thereof. In this news item she is quite outspoken and proud about this support:

New South Wales Premier Gladys Berejiklian has broken ranks with her ethnic church and declared she will be voting “Yes” in the same-sex marriage postal survey. Speaking at an event in Sydney, Ms Berejiklian described same-sex marriage as a “no brainer” and one of the most important human rights issues of our time.
The position has put her at odds with her Armenian Apostolic Church, which claims same-sex marriage would pave the way for “radical gay sex education programs” to be taught in schools. Ms Berejiklian, who was born in Australia to Armenian immigrants, is a regular attender of church events and has been to several this year.

Second, politicians are always selective about what, when and where they attend things. They would turn down many events for many reasons. They are always accepting or turning down invitations for all sorts of considerations. Plenty of other NSW politicians did not see the need to roll up for this decidedly anti-Christian affair.

Mike Baird was Premier before the current one, and he too claims to be a Christian. As far as I know, he never showed up and joined in with the decadent revelry of this march. Why should he have? So I give him credit for that. All politicians are, and must be, selective in what they attend and what they endorse.

And if we buy this line that a big cheese politician has to show up for everything to “represent everyone,” then where does that end exactly? Or does it end? Are there no limits? If a Christian politician claims he or she must attend an event celebrating what the Bible calls an abomination, where else will they show up?

Will this politician show up and represent drug users, rapists, pole dancers, adulterers, arsonists, sex workers, and bank robbers too? Sorry but I really don’t buy her line at all. By showing up or not showing up you are making a very clear statement. You are lending your endorsement to something when you go to an event.

You are showing your support and acceptance of it. Sure, it is one thing if, say, a politician who is a diehard Richmond Tigers supporter has to go and help launch the opening of a new Collingwood Magpies centre. Or a politician may have to go to a function with characters he or she might not normally associate with – perhaps members of the opposition party.

But to go to this blatantly ungodly, anti-Christian sleaze fest when one was under no obligation whatsoever to go is just not on for someone claiming to be some sort of devout Christian. But as mentioned, given that she threw her lot in with homosexual marriage, she seems to be sending out fairly clear messages as to where she stands with these things.

It was of course no surprise to see the Prime Minister grinning from ear to ear as he enjoyed the sleaze march. He has been there before, as has Opposition Leader Bill Shorten. But then again neither one is making any claims to being any sort of a committed Christian. So we expect them to not have qualms about all this, especially a small-l Liberal like Malcolm.

But if the Premier wants to give people the impression that her Christian faith means something to her, then she had better start giving clear, unequivocal indications of this. Enthusiastically supporting fake marriage – and thus denying biblical marriage – and attending these raunchy and decadent homosexual marches is NOT how you demonstrate this.

Anyone even remotely Christian should know some basic biblical truths, including the fundamental truth expressed in Psalm 1:1: “Blessed is the one who does not walk in step with the wicked or stand in the way that sinners take or sit in the company of mockers.”

Sorry, I am sure she may be a nice person, and maybe has some sort of faith. But I will not call her an ally when she sides with those who so blatantly, arrogantly and angrily side against Christ, against Scripture, and against Christians. I know whose side I am on.

As always, only God ultimately knows the human heart, and who is really one of his children. In this case we can and should do at least two things. First, we must pray for her. Pray that she starts walking her Christian talk, and not defy God and Scripture on his clearly revealed will in these areas.

In this regard she needs to repent. By sending such mixed messages, she is indirectly at least causing many people to stumble, and perhaps sending many to a lost eternity. That is not something any true believer wants to be involved in.

Second, those especially in her electorate should contact her and let her know how disappointed they are that her Christian talk and her Christian walk are not in alignment. And even if folks are not Christians, they can still strongly protest her giving support and encouragement to such an unhealthy and dangerous lifestyle.

Would she march in a pro-tobacco rally to show her support for – and to represent – cigarette smokers? There would likely be far more smokers in NSW than homosexuals. Both are engaged in risky and unhealthy lifestyles. If she would not go to the one, then why go to the other?

18 Replies to “On Christian Politicians and Consorting With Evil”