We all have our idols, and we all must deal with these idols. An idol is anything which commands our attention and loyalty over and above the one true God. We are too sophisticated to bow down before carved statues and graven images today, but we are just as idolatrous as our pagan forebears.

As A. W. Pink put it, an idol is “anything which displaces God in my heart. It may be something which is quite harmless in itself, yet if it absorbs me, if it be given the first place in my affections and thoughts, it becomes an ‘idol’. It may be my business, a loved one, or my service for Christ. Anyone or any thing which comes into competition with the Lord’s ruling me in a practical way, is an ‘idol’.” 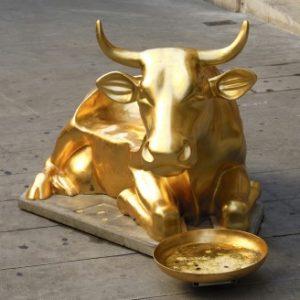 There is nothing difficult about the manufacture of idols. It comes readily to us. As Calvin said, “Every one of us is, even from his mother’s womb, a master craftsman of idols.” And again, “Man’s nature, so to speak, is a perpetual factory of idols.”

The Old Testament speaks plenty to the issue of idolatry, and how to deal with idols. In a word, it says we are to deal with them harshly. There is to be no compromise here, no softly softly approach. We are to be ruthless and severe in our opposition to idols.

And since idolatry did involve so many statues and graven images back then, actually destroying those idols was part of the response of God’s people. That is how God told his people to deal with idols. Plenty of passages speak to this. Since I am reading through Kings right now, let me confine myself just to some of the references found there on how Israelites were to deal with idols.

Godly kings and prophets were as one in how to deal with idols. Consider the godly King Asa. We read about his resolute opposition to idols in 1 Kings 15:11-13:

Asa did what was right in the eyes of the Lord, as his father David had done. He expelled the male shrine prostitutes from the land and got rid of all the idols his ancestors had made. He even deposed his grandmother Maakah from her position as queen mother, because she had made a repulsive image for the worship of Asherah. Asa cut it down and burned it in the Kidron Valley.

Consider how Elisha the prophet and King Jehu dealt with the evil and idolatrous King Ahab and Queen Jezebel. In 2 Kings 9:6-7 we read this:

Then the prophet [Elisha] poured the oil on Jehu’s head and declared, “This is what the LORD, the God of Israel, says: ‘I anoint you king over the LORD’s people Israel. You are to destroy the house of Ahab your master, and I will avenge the blood of my servants the prophets and the blood of all the LORD’s servants shed by Jezebel’.”

And for this God praised Jehu: “The Lord said to Jehu, ‘Because you have done well in accomplishing what is right in my eyes and have done to the house of Ahab all I had in mind to do, your descendants will sit on the throne of Israel to the fourth generation’” (2 Kings 10:30).

That is some pretty severe action taken against idolatry and the idolaters. Another faithful king was Jehoiada. In 2 Kings 11:17-18 we read about the actions he took to deal with idols:

Finally consider another great king – Josiah. After finding the Book of the Law and coming under great conviction, he took hardcore steps to deal with all the idolatry in the land. We read about this in 2 Kings 23:1-20. After Josiah renewed the covenant, he took strong action. We read about just part of this in verses 4-7:

The king ordered Hilkiah the high priest, the priests next in rank and the doorkeepers to remove from the temple of the Lord all the articles made for Baal and Asherah and all the starry hosts. He burned them outside Jerusalem in the fields of the Kidron Valley and took the ashes to Bethel. He did away with the idolatrous priests appointed by the kings of Judah to burn incense on the high places of the towns of Judah and on those around Jerusalem—those who burned incense to Baal, to the sun and moon, to the constellations and to all the starry hosts. He took the Asherah pole from the temple of the Lord to the Kidron Valley outside Jerusalem and burned it there. He ground it to powder and scattered the dust over the graves of the common people. He also tore down the quarters of the male shrine prostitutes that were in the temple of the Lord, the quarters where women did weaving for Asherah.

As is apparent, the people of Israel were not to pussyfoot around with idols. They were not to tolerate them or put up with them. They were to strictly and sternly deal with them. Christians are also to deal harshly with idols today. However, let me offer two caveats on how we are to go about this.

First, I am not saying we should go around blowing things up today. What we find in the Old Testament is primarily the kings or prophets of Israel dealing with idols in their own land. We are not in that place today. But at the very least, we need God’s attitude on these idols. The Apostle Paul is a good example of this.

When he walked through the idol-filled Athens, we read about what he thought of it all: “Those who escorted Paul brought him to Athens and then left with instructions for Silas and Timothy to join him as soon as possible. While Paul was waiting for them in Athens, he was greatly distressed to see that the city was full of idols” (Acts 17:15-16).

We too should be greatly grieved and bothered by what grieves the heart of God. He loves us too much to allow us to continue in our idolatry. This is as true of Christians as of non-Christians. As C. S. Lewis put it, “Images of the Holy easily become holy images – sacrosanct. My idea of God is not a divine idea. It has to be shattered time after time. He shatters it Himself. He is the great iconoclast.”

Second, what I am especially saying here is that Christians should be ruthless with idolatry, primarily in their own lives. The obvious place to begin is with ourselves. That is where we must start as we engage in search and destroy missions against idolatry.

And if we are honest and open before God, we will know that we have plenty of such idols to deal with in our own lives. As John exhorted us: 1 John 5:21, “Dear children, keep yourselves from idols.” Individuals and churches both need to heed this warning.

All this is not to say we cannot and should not call out the idols of our age. We should speak out against them of course. But our role is not to try to physically tear them down (eg., seeking to demolish the MCG or other sporting shrines). Our role as Christians is to be salt and light in society.

We should be speaking prophetically against the idols of our day, be it power, or success, or sex, or greed, or materialism, or what have you. We are to share God’s heart on the idols all around us, pointing people to a better way – to the one true and living God.

So we begin by being ruthless with the idols in our own hearts, and then we have a prophetic ministry in showing a needy world where our loyalty and devotion should lie. And the only way we can really spurn false gods and useless idols is when God breaks through in our life. As R. C. Sproul put it:

Loving a holy God is beyond our moral power. The only kind of God we can love by our sinful nature is an unholy god, an idol made by our own hands. Unless we are born of the Spirit of God, unless God sheds His holy love in our hearts, unless He stoops in His grace to change our hearts, we will not love Him… To love a holy God requires grace, grace strong enough to pierce our hardened hearts and awaken our moribund souls.

5 Replies to “On Dealing with Idols”