There are a few truths you can count on when it comes to angry atheists: they are absolutely certain that there is no God, and they hate his guts. Indeed, it always amuses me to find that the folks who most hate on God, and are the most obsessed with God, are the ones who are most adamant that he does not exist!

These folks usually have real issues, and they are not primarily intellectual. And they certainly need prayer. I deal with them all the time alas. They can be really very nasty and hate-filled. For the most part they do not offer reasoned and logical arguments against theism or Christianity. 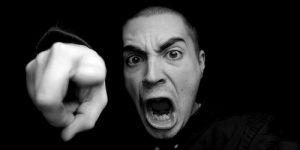 They usually just lash out, emote, and reveal all the anger and bitterness that is consuming them. They clearly are in an emotionally and psychologically bad way, and that almost always results in them being in a rather damaged mental state as well. Their minds have turned to mush as all the hatred and animosity consumes them.

When they speak, the hatred just pours out of them. As I have dealt with so many of these people over the years, it seems they almost always have issues that need to be dealt with. Any number of things may have happened to them earlier on, and God – and God’s followers – become the object of their wrath and venom.

Instead of dealing with their issues, they just lash out in rage and vitriol. It is pretty pathetic to behold actually. Often you can only pray for them, as they are not acting rationally or reasonably, and they are not open to facts and truth. They are just speaking out of their hurt and bitterness.

And the strange thing here is when an atheist asserts that there is no God, he is putting himself in the place of God. He is declaring that HE is the centre of the universe, and he will call all the shots and determine what is true and false, right and wrong.

Yet for all their new godlike status and power, they still cannot even come to grips with their own internal issues. They just lash out in anger at others, and at the God they claim does not exist. What sorry lives these are. As mentioned, there may have been all sorts of things that have set them off.

On the lighter side, perhaps a young man was rejected by a girl he liked in Sunday School, and he thus is mad at God, and has hated Christianity ever since. Sure, it could be something more serious: perhaps there was real hurt or betrayal or abuse they experienced in church when they were young.

Much of that is of course wrong, and those who did such wrong will stand before God and give an account. But the victim of this needs to deal with it, come to terms with it, and not just live in anger and bitterness for the rest of their life. We all have had lousy things happen to us in life, sometimes even from church people.

Of course the truth claims of Christianity do not rise or fall because of some poor representatives of the faith. Yes, they may do damage to the witness of Christ, but the truth or falsity of theism in general and Christianity in particular does not rest on Christians who may have poorly modelled the life of Christ, and must be determined in other ways.

For those who have been hurt by the church, forgiveness, healing and restoration is possible if you desire that. But many of these folks just want to stew in their juices, and keep on hating God and Christians. That is easier than coming to terms with the issues in their lives that need to be dealt with I guess.

There are plenty of these irrational and hate-filled misothiests that we could run with here. One woman who is the perfect example of this is the very messed up Australian “comedian” and commentator, Catherine Deveny. I have written about her often before sadly, given all of her ugly outbursts. See here for example: billmuehlenberg.com/2010/05/04/atheists-say-the-ugliest-things/

Consider just some of her many edifying tweets from over the years:

“Rove and Tasma look so cute … hope she doesn’t die, too” (speaking about Rove McManus and his wife Tasma, referring to the death of his first wife Belinda Emmett who died of cancer in 2006)

“Jessica Watson! I hope you don’t die and I hope you get laid” (speaking of the Australian sailor who was awarded the Order of Australia Medal)

Or consider one of her Melbourne International Comedy Festival shows entitled, “God is Bulls**t: That’s the Good News”.

Wow, what a sicko. She is utterly obsessed with God, with sex, with death, and a host of morbid and twisted thoughts. This gal has some real issues. When you virulently hate on God you always end up virulently hating on his creatures as well. So she is now just a walking poisoned well, spewing out horrific bile every time she opens her mouth.

Consider her latest diabolical outburst, offered on one of the most sacrosanct days of the year in Australia. She said this in a tweet: “ANZAC Day. It’s Bogan Halloween.” And she said this on Facebook:

“ANZAC Day is f**king disgusting and should have gone in the bin decades ago. As it gets closer my head feels tighter and tighter and I feel more and more nauseous. I blame the collective cognitive dissonance seeping in. I abhor Anzac Day and can’t wait til it’s over. I am so delighted to hear the chorus increasing every year saying ‘Anzac Day is bullsh*t. It’s a Trojan horse for racism, sexism, toxic masculinity, violence, homophobia and discrimination’.”

And this is not the first time she has spewed out such reprehensible ugliness on such an important day. Back in 2010 for example she said this about Anzac Day: “Men only enlisted to fight for the money, for the adventure or because they were racist. Anzac Day Sh**s Me. Anzac Day IS a glorification of war. They didn’t die for us but because they were risktaking testosterone fuelled men with a pack mentality.”

Wow. Just wow. Catherine Deveny certainly needs therapy, prayer, and probably even an exorcism, but she does NOT need a public platform to spew her vile hatred. She is a very messed up woman and her bizarre hatred of God has impacted her entire being it seems.

Hatred comes out of her lips far too readily. As I said, those who believe in prayer must keep her in prayer. For all her God-hatred and people-hatred, she is still made in God’s image and is still one for whom Christ died. Pray that she has a Damascus Road experience before it is too late.

It is clear that she has some very deep issues in her life to deal with. She must have had a lot of lousy experiences to become this hateful and irrational. But the good news is, there is help, hope and healing for all those who desire a new life – even for Deveny.

Join with me as we pray for this tormented soul. It would be wonderful if she found real healing, real restoration, real peace, and real forgiveness in Christ. And that is true of all the angry atheists out there. Keep them in prayer – they sure need it.