Just over 75 years ago some very brave and passionate young people were executed in Germany for daring to resist Hitler and the Nazis. Two of the main players were sister and brother, Sophie and Hans Scholl. Their stories are now engraved in history, and they have inspired millions along the way.

Robert and Magdalena Scholl had six children, including Sophie and Hans. They were raised as Lutherans and a Bible in the home was there to be read and studied. Her mother was the more religious of the parents, and her father early on came to oppose the Nazis. 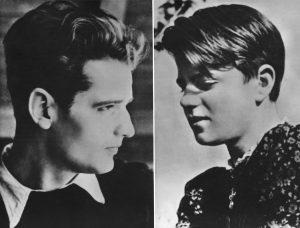 As the Nazis came to power, all the Scholl children at first became keen supporters of the Nazis, and some even joined the Hitler Youth, much to their father’s horror. But they soon grew very uneasy with what was happening in their country as they began to see what was really going on. And when most of the siblings were briefly arrested by the Gestapo in 1937, their dislike of the regime turned to contempt.

Another part of their reason for making such a turnaround was the fact that they looked to Christian writers to help them assess all this. They were impacted by various books and authors, including Augustine, Pascal, Aquinas, and John Henry Newman. And the Bible. Their serious reading helped them to think clearly and soberly about the culture they were living in, and how they might respond.

Sophie’s boyfriend Fritz Hartnagel wrote to her while deployed on the Eastern Front. She had given him two volumes of Newman’s sermons. In his letter, basically quoting Newman, he wrote: “We know by whom we were created, and that we stand in a relationship of moral obligation to our creator. Conscience gives us the capacity to distinguish between good and evil.”

During this period the Scholl family, like so many others, wondered what could be done. Outright opposition would be suicidal, but some sort of opposition was required. Just sitting back in indifference and apathy was not the way forward. Some sort of response was necessary.

Some, like Bishop Galen of Munster did speak out in sermons, attacking the regime, especially Hitler’s euthanasia program. His sermon on this was circulated, and it made a big impact on the Scholls. As Hans Scholl put it, “At last, somebody has had the courage to speak out.”

During this period, in May of 1942 Sophie entered the University of Munich to study biology and philosophy. Hans was already there as a medical student. Hans had led the charge in the resistance, and Sophie soon joined in. Thus early in the summer of 1942 the White Rose resistance movement was formed.

It began with six main players: Hans and Sophie, and fellow students Christoph Probst, Willi Graf and Alexander Schmorell. They were joined a bit later by university philosophy professor Kurt Huber. Others soon joined. The group was made up of various faith groups: Protestant, Catholic and Orthodox.

As Richard Hanser puts it:

They made a highly implausible band of rebels and subversives. . . They had chosen to reject the prevailing values of their society, to cut themselves off from the convictions and enthusiasms of their peers, to make themselves aliens in their own land, and to put their lives in jeopardy rather than accept the mores that a brutal despotism was determined to impose on them.

A major activity of this underground movement was to write and distribute leaflets exposing the brutality and evil of the Nazis, urging active measures to resist them. Hans was the leader of the group, and Sophie at first did not know the leaflets were the work of her own brother (he had hid this from her to protect her).

Once she discovered who was involved, she moved from passive to active resistance. In total, six such leaflets were produced within a year. Of course this sort of writing was clearly treasonous and seditious, and anyone caught producing such publications would face certain death. While the Scholls were involved in distributing the sixth leaflet, they were caught and arrested and interrogated. A few days later Probst was also arrested.

At their trial, Sophie and Hans said it was their Christian conscience that had compelled them to oppose the Nazis in a non-violent fashion. Within a few short days their lives were over, having been beheaded by a guillotine. Sophie was just 21. Hans was 24, and Probst was 23.

Hours before her death Sophie told her cellmate, political prisoner Else Gebel, the following: ‘It is such a splendid sunny day, and I have to go. But so many men are dying every day on the battlefield, so many promising lives are being lost…. What does my death amount to as long as what we did served to stir up people and make them think?’

Following their deaths, a copy of the sixth leaflet was smuggled out of Germany, and it was used by the Allied Forces to continue the propaganda war. In mid-1943, they dropped millions of copies of the tract, retitled ‘The Manifesto of the Students of Munich’ over Germany.

In her very last meeting with her parents just moments before her execution, Sophie said this: “What we did will make waves”. Her mother replied, “Sophie, remember Jesus.” Sophie responded, “Yes, but you too.”

Yes they certainly did make waves, and we still feel the effects of this today. As our own day gets increasingly darker and more barbaric, we really need more such brave and fearless resistance fighters. God bless you Sophie and Hans. You are such an inspiration.

“Stand up for what you believe in even if you are standing alone.”

“Somebody, after all, had to make a start. What we wrote and said is also believed by many others. They just don’t dare express themselves as we did.”

“An end in terror is preferable to terror without end.”

“I know that life is a doorway to eternity, and yet my heart so often gets lost in petty anxieties. It forgets the great way home that lies before it.”

“The real damage is done by those millions who want to ‘survive.’ The honest men who just want to be left in peace. Those who don’t want their little lives disturbed by anything bigger than themselves. Those with no sides and no causes. Those who won’t take measure of their own strength, for fear of antagonizing their own weakness. Those who don’t like to make waves – or enemies. Those for whom freedom, honour, truth, and principles are only literature. Those who live small, mate small, die small. It’s the reductionist approach to life: if you keep it small, you’ll keep it under control. If you don’t make any noise, the bogeyman won’t find you. But it’s all an illusion, because they die too, those people who roll up their spirits into tiny little balls so as to be safe. Safe?! From what? Life is always on the edge of death; narrow streets lead to the same place as wide avenues, and a little candle burns itself out just like a flaming torch does. I choose my own way to burn.”

“I will cling to the rope God has thrown me in Jesus Christ, even when my numb hands can no longer feel it.”

“It’s high time that Christians made up their minds to do something . . . What are we going to show in the way of resistance… when all this terror is over? We will be standing empty-handed. We will have no answer when we are asked: What did you do about it?”

“If Christ hadn’t lived and hadn’t died, there would truly be no way out at all. Then all the weeping would be horribly meaningless. Then one would have to run against a wall and smash one’s scull. But as it is, no.”

“I knew what I took upon myself and I was prepared to lose my life by so doing.”

Minutes before his execution he said this: “Now … through a glass darkly; but then face to face. … Long live freedom.”

“No one can know what secret inner ripening can come from suffering and sorrow. All we know is that every individual’s life is priceless – that each is dear to God.”

“No man makes his own fate; he can only accept it.”

Minutes before his beheading he said this to Sophie and Hans: “Well, in only a few minutes we shall be seeing each other again. In eternity.”

There are now various books – and films – available, but perhaps the most thorough and useful volume is this:

Richard Hanser, A Noble Treason: The Story of Sophie Scholl and the White Rose Revolt Against Hitler. Ignatius, 1979, 2012.

And another recent collection of source documents is now available:

The 2005 German film, Sophie Scholl – The Final Days is another resource worth watching: www.youtube.com/watch?v=baRvF6ZBK18