And who does not like collections? Some folks collect stamps, or rocks, or coins, or dolls, or baseball cards, or toys, or movie posters, or marbles, or feathers, or butterflies, or teaspoons, or old bottles, or paintings, or records, or cars, or seashells. OK, so I collect books, and theological sets!

Here I especially want to focus on multi-volume sets or series featuring multiple authors. There are numerous sets like this that are quite valuable, and Christians should be aware of them. One need not get every book in the series, but being aware of what is available may be of some use.

Given my interest of late in Christian biographies, let me look at a few sets which are very good indeed when it comes to telling the stories of some of the great saints. Most of the books in these sets are not overly lengthy, so they will not consume too much of your time. But they are great volumes to help you get to know further some of these great figures from church history. 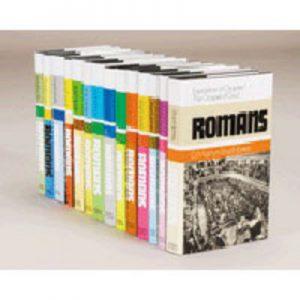 History Makers series
This helpful series of biographies (and a few autobiographies) is put out by Christian Focus. It seems to have around 20 volumes thus far, with most penned during the past two decades or so. I am not sure if more are on the way, but they are relatively inexpensive paperbacks, and are well worth collecting. I here feature the biographical subject, followed by the author:

The 15 volumes that thus far have appeared were written between 2013-2018. There may well be more new ones forthcoming. They are (in rough order of appearance):

This is another useful series of biographies of godly men. There seem to be over a dozen books in this series so far, most penned by Steven Lawson. The Reformation Trust Publishing books are these (by order of author):

A History of Evangelicalism series
This five-volume series, put out by IVP, is edited by David Bebbington and Mark Noll. As the name suggests, it does not cover 2000 years of church history, but several hundred years of American and British evangelicalism. It is a very good set indeed. The volumes are:

40 Questions About series
This is a quite good series put out by Kregel. It looks at various theological, biblical and ecclesiastical subjects, all examined in a question and answer format. There are nearly a dozen books available thus far, and presumably more are coming. They are, in rough order of appearance:

Foundations of Evangelical Theology series
This is a top-notch series in systematic theology, edited by John Feinberg. There are seven volumes so far in this Crossway series, and each is very substantial and thorough indeed. Feinberg’s volume on the doctrine of God is nearly 900 pages for example. They are, in order of appearance:

Sets by the same author

There would be plenty of single-author sets that I could mention here. Let me just run with four of them. Future articles may cover more.

One really valuable set is With the Church Fathers series by Christopher Hall. Most Christians are quite ignorant of the church Fathers and how very foundational they are to the church today. In these four books we see what they said and believed about theology, the Bible, worship and ethics. They are:

For fans of the Old Testament, I still benefit greatly from John Goldingay’s 3-volume Old Testament Theology (IVP, 2003, 2006, 2009). All up the three volumes contain some 2700 pages of first-rate analysis of OT themes and theology. A solid and superb study of the OT.

And of course one cannot omit two more sets which are so useful in getting a solid grasp of major parts of the New Testament. I refer to two classic sets by the great Welsh preacher and biblical expositor, Martyn Lloyd-Jones. His most important set of course is his 14 volumes of expository sermons on the book of Romans. Published by Banner of Truth, the set is magisterial, and well worth getting.

As I wrote previously: “Delivered as a series of sermons between 1955 and 1968 at Westminster Chapel, London, it is a monumental achievement. At 5078 pages – to be precise – it is a goldmine of exegetical and expository excellence, timeless theological truths, and spiritual nuggets.”
billmuehlenberg.com/2013/02/27/5000-pages-on-romans-by-the-doctor/

And then we also have his eight volumes on the book of Ephesians, released between 1974-1982. As with his series on Romans, the 6 chapters of Ephesians are covered in great detail, with each verse given thorough treatment. “The Doctor” is always to be consulted on these two books.

Here then are ten sets you should be aware of. Plenty more could be mentioned here, so stay tuned for further articles.

(Many of these books can be found at Koorong for Australian book lovers: www.koorong.com/ )

7 Replies to “Some of My Favourite Sets (of Theological Books)”